‘We have to prepare ourselves:’ Downtown Orlando bars could see busy Halloween weekend

ORLANDO, Fla. – When News 6 executive producer Tara Evans heard about Orange County Fire Rescue's 343 Hero Challenge, she knew she needed to be a part of it. She decided to team up with reporter James Sparvero, as well as his brother Ricky, to form a three-person team.

What is the 343 Hero Challenge? 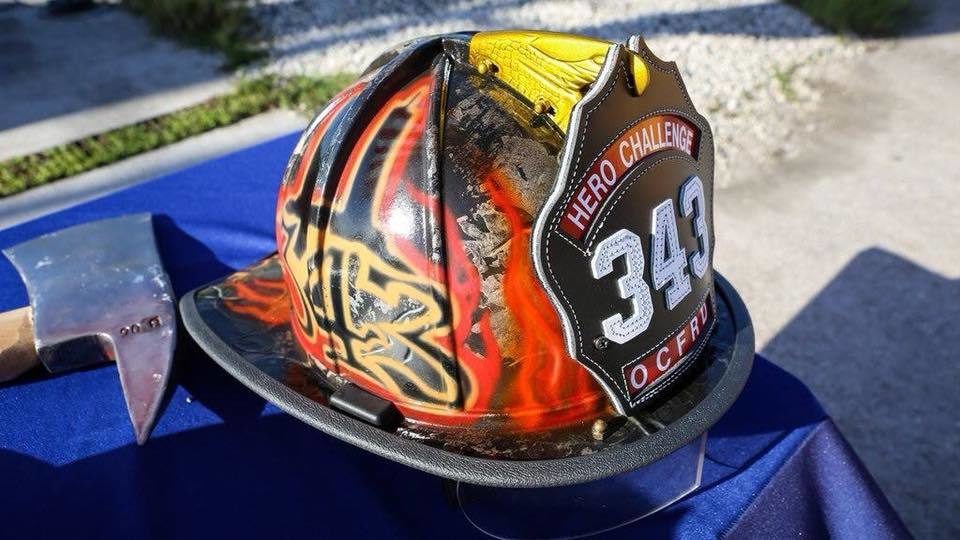 The 343 Hero Challenge is now in its sixth year, and is a competition based on CrossFit-style workouts coupled with firefighter training-style implements. This year, it's happening Saturday at the Orange County Fire Rescue Fit Pit, or training facility. The competition honors the 343 firefighters who lost their lives on Sept. 11, 2001. It's also a charitable effort with proceeds going toward Orange County’s 2018 United Way Campaign.

There will be four workouts, including the signature workout, which is a 3:43 box step-up workout wearing fire gear. The idea is to get as many reps as possible in that time frame, and signifies the walk up the stairs firefighters had to do that day at New York's World Trade Center.

This year, there is also an honor athlete competing, LeeAnn Yanni. She's a physical therapist in Central Florida and also a Boston Marathon bombing survivor. You can read more about her story here.

I'm a competitive strength athlete already, and I also happen to be from Long Island, New York. So this is not only a cause that hits home for me, it's also right up my alley with the competition.

I remember, I was 14 years old when 9/11 happened. I was sitting in my second-period freshman English class, and it was just the second week of school. Not everyone had cellphones at that time, and we definitely weren't supposed to have them in class, so none of us knew what was happening just a short distance away until a teacher ran into the room and asked us how many of us had parents that worked in New York City. I raised my hand, and so did the son of a NYC firefighter. The teacher left, leaving us confused. We would later find out that my dad, working in IT for a major company, would come home -- his father, though, would not.

I only remember flashes of the day. We had no idea what had actually happened right away. Some kids began getting texts, but everyone was on their cell phones in the tri-state area at the time, so it was really difficult to get through anywhere.

I remember being in the gym for the next class period, and they'd pulled bleachers out and had set up one of those TV carts (remember those?). We watched the plane hit the second tower. OK, now we knew what was going on -- sort of. I knew my father had worked at one of his company's buildings at the World Trade Center the week before, but didn't know where he was that day, so I remember being pretty panicked much of the day.

A few hours later, I remember kids streaming into the guidance offices, because they were letting us use the phones there to try to reach our families since our cellphones didn't work. I was finally able to get a hold of my mom, who told me my dad had not been working at the WTC, but he couldn't leave his building. There was too much dust, too much ash, and with his severe breathing problems, he wasn't even able to leave until about 6 p.m.

I don't remember anything else about the school day. I remember getting home, finding my mom in her office, and just feeling so scared. I remember asking what was going to happen. Would we have to move? Were we safe? Was something going to happen to us? I can't imagine how my mother must have felt, not able to give any answers or comfort. I have tears in my eyes writing this because I can still feel the panic rising in my chest remembering all this, 17 years later.

My dad was able to take a ferry to the island, because trains weren't running in or out of the city (his preferred commuting method) and the bridges were closed. So we had to drive about 40 minutes west to pick him up.

The image from the whole day, that stuck with me as a teen and still gives me goosebumps, was that we did not pass one car on the Long Island Expressway. Not one. Imagine riding on I-4 for 30 minutes without ever passing one car. The eeriest experience I've ever had.

The effects of that day still hit that area. I have heard so many stories that continue to blow my mind. People who weren't supposed to be at work that day. People who missed a train and ended up safe, when they otherwise wouldn't have been.

The heart-wrenching stories my father told me-- the silence that came over the trading floor at his company while the wave of dust and papers just enveloped the building. The co-worker who said his goodbyes to his brother-- because he worked above where the plane hit and knew he wasn't making it home. The kids I went to school with whose fathers never came home. The overwhelming sadness, the somber feeling that stretched on for weeks.

Later in life, I'd meet several firefighters who were first responders that day and survived. I'd hear the stories of the panic. Of the boots lining the streets, of the guessing game, where to go first, who they could help, how some guys trying to rescue people didn't get out of the buildings in time when they fell. How they were supposed to be working at different houses that day, how they volunteered to go downtown, how they all ran in without a second thought.

I heard the stories about how years later, guys were praying to get promoted within the fire department, praying they could get far enough, that if they too, like so many of their brothers, succumbed to the Ground Zero dust and toxic after-fumes, their families would be provided for. How so many guys at the time couldn't accept the money from the various bills and settlements because they weren't sick yet and didn't want to take money away from the guys who were sick right then.

That's why I have to do this competition. Because the people I grew up with and around suffered more than I can imagine and I want to honor them. The lives changed forever, the lives lost. I can't fix any of that, but I can remember them and I can honor them and this is the best way I know how, doing something I love.

I'm actually a competitive powerlifter and amateur strongwoman. I've been a part of the team at CTX Fitness in Orlando, coached by the owner, Allen Pilley for about 3 years.

For those who don't know, the sport of strongman is pretty much what it sounds like. You know, when you've seen on TV the men and women pulling cars around and picking up concrete stones and deadlifting cars and throwing kegs around? Yeah, that. I've only been competing in strongman for about nine months, and have done three shows-- one of which I won as a novice and one of which I won in the open heavyweight category. Don't let that fool you-- I'm strong, but have lots of work to do if I want to be the strongest.

I've been powerlifting for about two years-- that's where I compete with three attempts each of squat, bench and deadlift -- and the goal is to do as much as you can and get the highest possible total.

So here was my chance! I used to do CrossFit, although it's been awhile since I've done a workout like that, so I was familiar with all of those movements. I haven't, of course, done firefighter training before, but the implements seem exciting. Strongman often has me carrying or pulling heavy objects around, so I figured, can't be too different.

To be honest, I haven't done a lot of training other than my usual 4-5 days a week. I like the idea of heading into a challenge-- the firefighters on 9/11 had no idea what they'd be doing that day when they went to work, and I have the benefit of knowing what I'm in for.

I wanted a teammate-- and I know reporter James Sparvero often kills it in the gym-- so I reached out to him. He got his brother on board, and the rest, as they say-- is history. We're excited to have a fun day-- and we'll be sure to update everyone on how we do-- and how the events go. We can't think of a better way to honor and remember our first responders.

Tara Evans is an executive producer and has been with News 6 since January 2013. She currently spearheads News 6 at Nine and specializes in stories with messages of inspiration, hope and that make a difference for people -- with a few hard-hitting investigations thrown in from time to time.