Instead of a parade, Orlando celebrates MLK with holiday showcase

Here on the Space Coast we’ll soon be launching some incredible female astronauts for the first time since 2011. But before commercial spaceflight with astronauts happens later this year, learn about the fearless female space explorers on International Women’s Day.

There is a reason NASA has embraced the term crewed instead of manned when talking about human spaceflight, because since 2013 the space agency has had equal parts female and male astronaut classes.

There are more inspiring women than can fit into one article but let's meet a few, shall we?

Kelly Latimer is a retired lieutenant colonel in the U.S. Air Force and now is a test pilot for Virgin Galactic. Latimer has logged more than 6,200 hours flying 40 different aircraft, including NASA's space shuttle carrier aircraft and the agency's airborne observatory, the Stratospheric Observatory for Infrared Astronomy, known as SOFIA.

With Virgin Galactic, Latimer will fly SpaceShipTwo -- and later this year she may be responsible for piloting the space plane with the first paying astronauts on board.

“I always had this passion to be an astronaut, just from as long as I can remember that’s what I’ve wanted to do,” Latimer said.

Watch the video below to hear why Latimer became a test pilot.

Flying spaceships is just for boys? Nope. Meet our Test Pilot, Kelly Latimer. She’s spent over 6,200 hours in the air flying more than 40 different types of aircraft. What drove her to become a test pilot? #IWD2019 pic.twitter.com/9OTUReyRbA

Russia flew the first two women in space, starting with Valentina Tereshkova in 1963. While Russia launched a woman into space years before the U.S. space program, only two women have flown for Roscosmos since 1984. The Russian space agency currently only has one female cosmonaut:  Anna Kikina.

She is currently training in Star City, Russia, with other cosmonauts and astronauts but does not have a spaceflight planned right now. NASA astronaut Christina Koch recently bumped into Kikina during their training.

I’m not usually the type to fan girl. But when you bump into the one current woman cosmonaut and you’re both training in the same building, it’s hard not to. She was learning manual Soyuz docking and I was co-pilot training. Honored to share the same uniform as you, Анна Кикина! pic.twitter.com/ZhQ1ChZSVC

Here’s hoping Kikina inspires more girls and women in Russia to apply for the next cosmonaut class, which is open to people over 35 years old with specific degrees in STEM fields.

The first African American woman to fly in space

In 1961, Alan Shepard was the first American to launch into space on Freedom 7. It would take more than three decades before an African American woman would visit space. That incredible human was Dr. Mae Jemison.

Jemison became the first black woman to visit the International Space Station in 1992. Now 62, she has continued to inspire people of color to pursue careers in science, technology, engineers and math fields with her company the Jemison Group.

Friday’s Google Doodle for International Women's Day includes a quote from Jemison, “Never be limited by other people’s limited imaginations.” According to Space.com the quote comes from Jemison's 2009 speech at the Biomedical Research Conference for Minority Students. 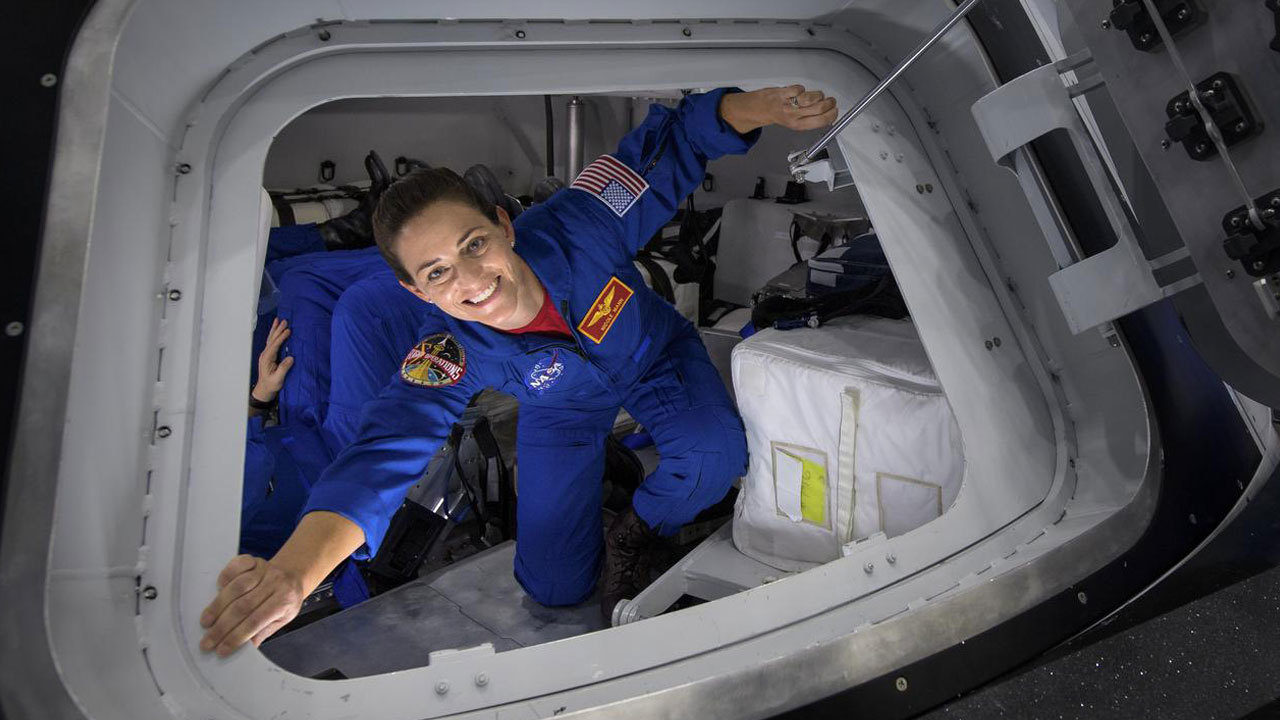 This year NASA’s commercial crew spacecraft by SpaceX and Boeing are set to launch U.S. astronauts from Cape Canaveral for the first time since 2011.

Williams has made two trips to the International Space Station totaling 322 days flying on both the Space Shuttle and Russian Soyuz spacecraft.

When others said you couldn't, you said "We can do it!" 💪
To the pioneers of space, our #Starliner teammates and @Commercial_Crew astronauts @AstroDuke and @Astro_Suni, thank you for building the future and daring to explore. #InternationalWomensDay #BalanceForBetter pic.twitter.com/PoCMim9GJJ

With more than 3,000 flight hours in over 30 different aircraft, Williams served in the U.S. Navy flying helicopters on relief and combat missions. Later, she became a test pilot and instructor. Williams was deployed when she was selected to be a NASA astronaut in 1998.

The first crewed test flight of Boeing's Starliner will be Mann's first trip to space. If an uncrewed flight slated for no earlier than April goes well that launch will happen in late summer.

Mann earned the nickname “Duke” as a lieutenant colonel in the Marine Corps. She served on combat operations in Iraq and Afghanistan and as a test pilot for the F/A-18 Hornet and Super Hornet. Mann was selected as part of the 2013 NASA astronaut class -- the first class to be equal parts men and women.
She told News 6 last August after her assignment on the Boeing Starliner she hopes the return to human spaceflight in the U.S. will empower the next generation of space explorers.

Astronauts working on the International Space Station have completed 213 spacewalks since 1998. However, on March 29 NASA astronauts Christina Koch and Anne McClain will become the first women to conduct a spacewalk without any men.

Canadian Space Agency flight controller Kristen Facciol announced on Twitter March 1 she will be on console while McClain and Koch conduct the first all-female spacewalk.

As a young girl, @Astro_Christina dreamed of going to space. Next week, that dream becomes a reality when she launches to the @Space_Station! Learn more about Christina & the other members of the Expedition 59 crew. https://t.co/0B48RUOxos #InternationalWomensDay #IEW2019 pic.twitter.com/ZdewH4cRQu

McClain has been working on the space station since December and will conduct another spacewalk with NASA astronaut Nick Hague on March 22, according to NASA.

Koch and Hague launch for the space station March 14.