For Honda, it’s just the tip of the iceberg

Published: June 19, 2019, 4:53 pmUpdated: December 16, 2019, 7:16 am
Tags: Investigators, News
If the old saying of a picture is worth a thousand words rings true, this picture is worth a lot more. What you’re looking at is the equivalent of 85,000 words: 85,000 recalled Takata airbags, sitting in a warehouse in western Ohio, awaiting their fate.
As News 6 exclusively reported over the summer , American Honda partnered with Rebuilders Automotive Supply (RAS) to scour salvage yards across the country in search of defective Takata airbags that could end up being pulled out of wrecks, recycled and put back into roadworthy cars.
“We take these airbags, and give them to the right people to get them off the streets so nobody uses them,” Tim McMillon told us in August. McMillon, owner of M&K Used Auto Parts in Orange City, says Honda and RAS give him about $50 apiece for each recycled airbag.
Scroll down to view Takata airbag-related deaths timeline at the bottom of the article.
But while the Honda-RAS program has been successful in taking a proactive stance to close this loophole, the company’s latest program gives some owners “zero-excuses” for not getting recalled airbags fixed.
Honda literally does the work for them.
“We have determined to the best of our ability that about 130,000 unrepaired Alpha vehicles remain on the road ,” said American Honda senior vice president Bruce Smith last August in a company press release. Smith added: “That’s about 12 percent of the total Alpha vehicle population that remain unrepaired.”
California has the highest concentration of Hondas that need replacement parts for their airbags, but Florida is not far behind. American Honda estimates there are still about 16,000 Alphas that need repairs, and of those 16,000 cars, approximately 2,300 of them are in and around Orlando.
What’s an Alpha?
The “Alpha” vehicles Smith referred to over the summer are certain 2001-2003 Hondas and Acuras with first-generation inflators. Those airbags have a higher risk of rupturing not only because of their age, but also because of exposure to hot and humid conditions. 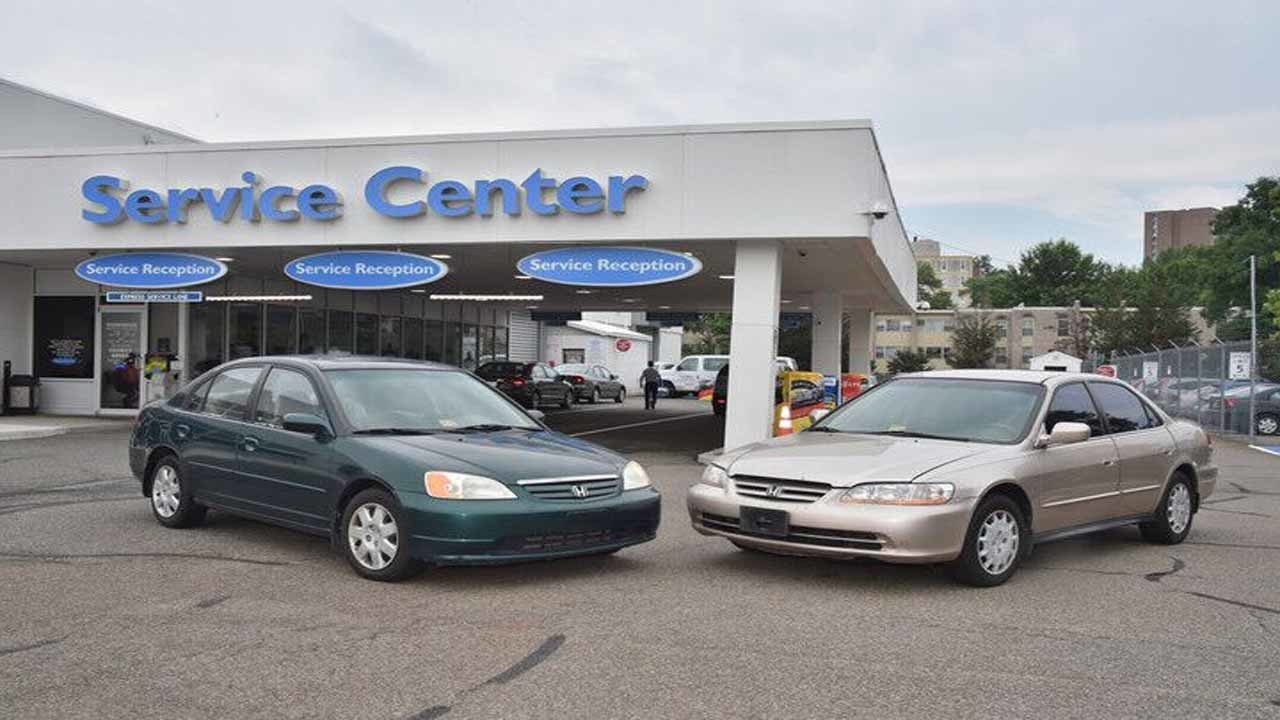 The Sunshine State is just one of more than a dozen geographical areas of concern because the National Highway Transportation Safety Administration (NHTSA) believes inflators in HAH areas (High Absolute Humidity) are more susceptible to ruptures. How much so? The
NHTSA, along with Takata, estimate HAH Alpha inflators have “an alarming rupture rate of as high as 50 percent.”
Besides Florida, other states, territories, and commonwealths of immediate concern include Alabama, California, Georgia, Hawaii, Louisiana, Mississippi, South Carolina, Texas, American Samoa, Guam, the U.S. Virgin Islands, Puerto Rico and Saipan.
The fix for the recalled Takata airbags is relatively simple: Technicians replace the internal faulty inflator (originally filled with ammonium nitrate – the same compound used in the Oklahoma City bombing), with a replacement part using a different compound (i.e. guanidine nitrate or tetrazole). Because it’s an internal component, the swap-out leaves the airbag intact. “A vehicle owner will not notice any difference in the appearance of their airbag after the repair,” said American Honda spokesperson Chris Martin.
With all of Honda’s efforts to get its older cars into dealerships to make a simple repair that could save a life, tens of thousands of vehicles with dangerous inflators are still on the road.
“Despite millions of outreach attempts by phone, text, email, traditional mail and more, over a hundred thousand owners of vehicles still on the road have not yet completed the recall repairs that could save their lives,” Martin added.
Since some owners aren’t bringing the cars into the dealerships, Honda instead is bringing the dealerships to the cars. 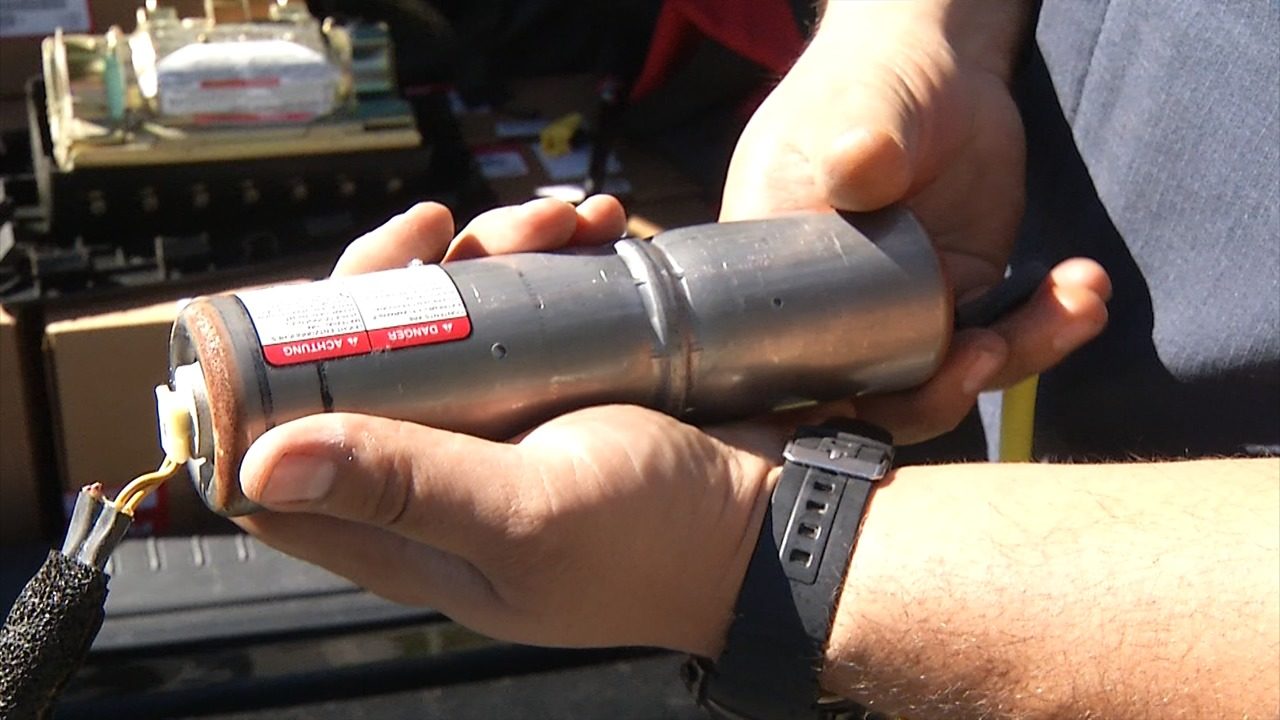 The Pit Crews
According to Martin, American Honda estimates it has made over 141 million attempts (overall) to reach owners through mail, phone, email, and social media. Earlier this year, the company began a nationwide hiring blitz of about 500 workers and assembled them into what they would eventually call Honda Recall Pit Crews. If an owner hasn’t responded to multiple communication attempts to get recalled cars in for repairs, team members are then pressed into action to go door-to-door and physically track down the cars.
Think Prize Patrol meets airbag recalls.
“We use the [registration] data that we’ve accumulated to try and locate people,” said pit crew team leader Tiffany Bellows. “I think a lot of people don’t understand the severity of the recall.”
Bellows and the two other members of her team are just three of 18 Honda employees canvasing Central Florida in search of recalled cars.
“The magnitude of what could actually happen -- it sometimes does take someone coming to the door and saying ‘This is serious. It could actually happen to you,’” Bellows said. But once owners understand what the company is doing and the steps they’re taking for owner safety, Bellows added, “We generally get grateful response.” 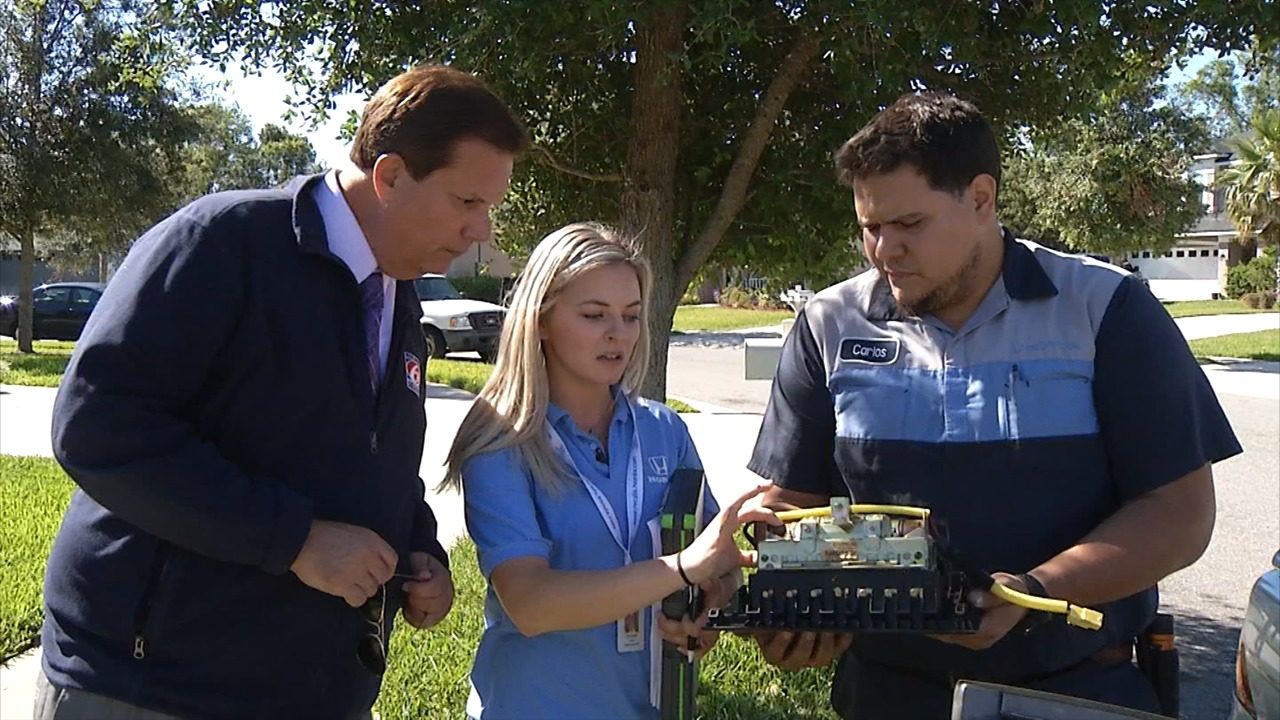 When the pit crew team finds a recalled car two options are available. With the owner’s permission, the crew can tow the car to a dealership, wait for the repair to be done, and then bring it back. Option number two: if they have the right part on hand, a certified Honda Recall Pit Crew mechanic can perform the swap right at the owner’s home. Honda is being so thorough with this outreach program that if an owner has a non-running vehicle, pit crew teams will replace the airbag inflators in those cars as well.
And the total time from knock on the door to paperwork to have a nice day: about 30 minutes.
“In this market, we originally started out with a little over 9,000 [cars],” said Bellows. “We’ve done about 6,300, so we have a 74 percent completion rate.” Bellows also said that for Central Florida, Honda is shooting for 100 percent completion by the end of the year.
“It is our latest initiative as part of a comprehensive effort to repair or account for all Honda and Acura vehicles with Takata “Alpha” inflators,” said Smith. “This repair is free – there is no cost to the owner.”
A Long Journey 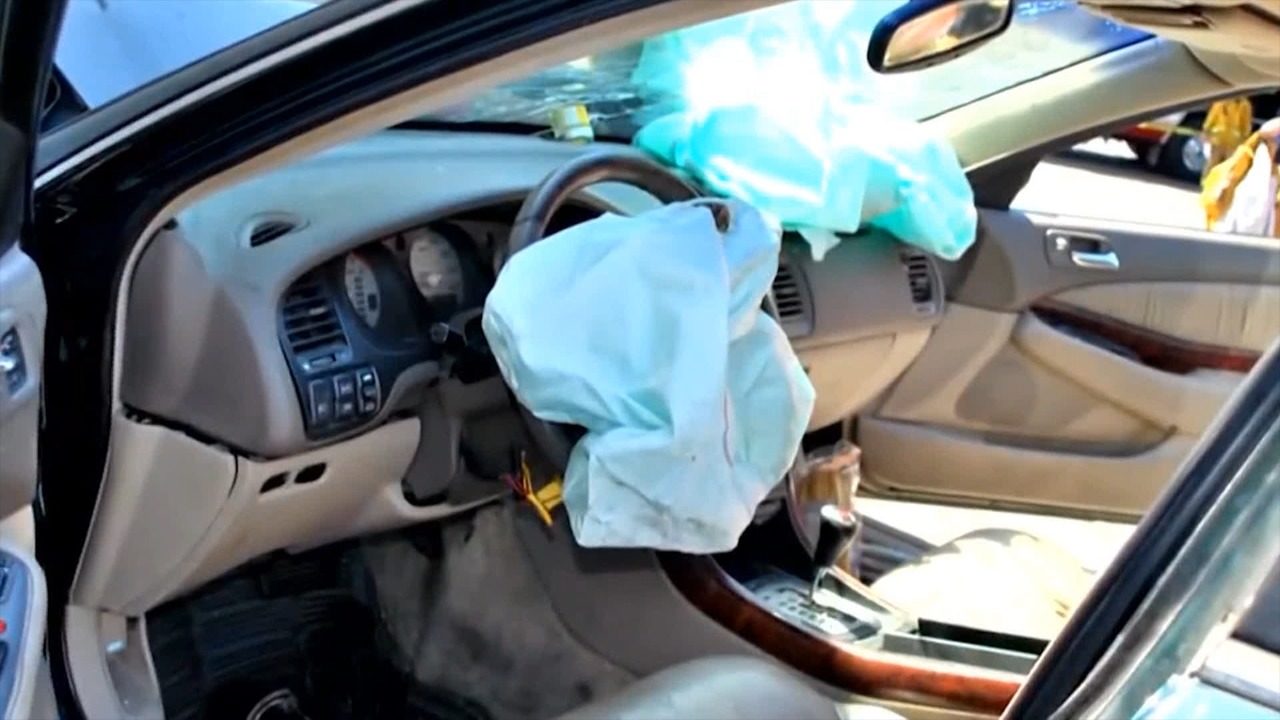 Since the first Takata airbag recall by Honda in November of 2008, the crisis has spread across 19 different automotive brands and 139 different models. Honda however took the brunt of the recall: Out of an estimated 70 million defective airbags that were put into vehicles, Honda was looking at fixing around 17.8 million of them (across 11.4 million Hondas and Acuras as some cars need more than one inflator). Martin confirms to News 6 that in addition to the 12 people who have been killed in Hondas or Acuras because of faulty Takata airbags (three here in Florida) more than 180 others have been injured.
According to NHTSA statistics posted on the web at the end of September, the company has fixed 11,056,278 airbags. American Honda says they’re actually a little ahead of those numbers, servicing 11.26 million airbags.
“By the end of September 2017, Honda continues to lead the industry in Takata recall completions with over 63.7 percent of recalled inflators replaced,” Martin said.
In January of 2017, the Takata Corporation plead guilty to charges of criminal wire fraud levied by the Department of Justice and agreed to pay damages of $1 billion divided among automakers ($850 million), victims ($125 million) and a fine ($25 million). Separately, in May of 2017, some plaintiffs of an airbag recall class-action lawsuit reached a settlement agreement with four automakers (Toyota, Mazda, Subaru, and BMW) worth $553 million covering nearly 16 million vehicles.
Both Honda and Nissan’s part of the class action suit gained preliminary court approval on Sept. 6, 2017 : Honda will pay out $484 million to settle consumer claims ; Nissan agreed to pay $98 million .
Takata filed for Bankruptcy Protection on June 26, 2017 ; the company also has agreed to sell off most of its operations and manufacturing to Michigan-based Key Safety Systems (KSS) for $1.6 billion. On November 8, 2017, Reuters exclusively reported creditors were seeking more than $30 billion from Takata.
Two final notes: on July 13, 2017, fifty-eight-year-old Huy Neng Ngo was killed when his 2007 Honda CR-V crashed into a Toyota Celica in Cabramatta in the southeastern state of New South Wales. Media outlets worldwide were quick to note that this accident was Australia’s first suspected death of a motorist linked to a faulty Takata airbag. However, outside of police believing the driver was killed by shrapnel from the airbag inflator, a final report from the medical examiner has still not been released.
“Honda has confirmed that the Takata driver’s airbag inflator did rupture in that crash,” Chris Martin of American Honda told News 6. Martin also said, “The official cause of death in the crash in Australia has not yet been determined by local authorities.”
Lastly, at one time there was believed to have been another U.S. death attributed to a faulty Takata airbag. The incident in question occurred on November 1, 2003, but didn’t come to light until November of 2014. The crash involved a brand new 2004 Subaru Impreza; twenty-four-year-old Charlene Weaver was a passenger in her boyfriend’s car when he got into a crash. Weaver, a special education teacher, was severely injured and died in a Phoenix hospital five days later from a brain hemorrhage and skull fractures. Her story was front and center during a Senate press conference (as told by her sister Kim Kopf) held prior to the November 2014 Congressional hearings on Takata airbags.
Despite the claim from Weaver’s sister and a personal injury suit filed against both Takata and Fuji Heavy Industries by Weaver’s mother Paula Lynn Weaver, the NHTSA never listed the Subaru crash among fatalities being linked to faulty Takata equipment. When WKMG-TV reached out to Subaru, Michael Hale, Director of Corporate Communications, clarified the status of Subaru and Takata airbags with this statement:
“That death was incorrectly attributed to a Takata-type issue, following an examination of the coroner’s report. The Senator spoke before gathering the full facts. None of our vehicles have experienced a Takata type injury to date.”
Weaver’s boyfriend’s Subaru was eventually put on the recall list for defective Takata airbags in July of 2014.

Donovan is an investigative and special projects producer at News 6. Dr. Myrie (yep, he has a Ph.D.) has been with News 6 since 2016 and has degrees from Ithaca College, Columbia University and Union Institute & University. He’s made quite a name for himself of late in the News 6 family with his comprehensive and creative infographics.

News 6’s Emmy Award-winning Investigative Reporter Mike Holfeld has made Central Florida history with major investigations that have led to new policies, legislative proposals and even -- state and national laws. If you have an issue or story idea, call Mike's office at 407-521-1322.