Winds are increasing along parts of Florida's East Coast as Hurricane Dorian tracks offshore in the Atlantic.

The U.S. National Hurricane Center says Dorian remains a Category 2 storm moving nearly parallel to Florida's east coast but offshore. It said that as of 4 p.m. EDT Tuesday, a sustained wind gust of 60 mph (95 kph) was reported recently at a weather station in Melbourne Beach, Florida.

The eye of Dorian continues to move away from Grand Bahama Island after leaving widespread devastation in parts of the Bahamas. Dorian's center is now about 105 miles (165 kilometers) east of Fort Pierce, Florida. Its top sustained winds are now at 110 mph (175 kph). The storm is moving northwest at 5 mph (7 kph).

The North Carolina Department of Transportation's Ferry Division is assisting with a mandatory evacuation for visitors on Ocracoke Island in the Outer Banks.

North Carolina's governor has waived ferry fees for the evacuation.

The Federal Emergency Management Agency says Hurricane Dorian is still expected to bring life-threatening storm surges even as it was downgraded to a category 2 hurricane.

FEMA Associate Administrator Carlos Castillo said Tuesday that residents along the U.S. East Coast should be prepared to evacuate if necessary and should heed evacuation orders from local officials.

Castillo says FEMA has over 1,600 employees deployed or on the way to Florida, Georgia, North Carolina and South Carolina.

The American Red Cross says they've already opened 170 shelters and evacuation centers. Over 13,000 people are already at those facilities.

The National Guard and U.S. Coast Guard say they have also readied troops and are ready to respond once the storm hits.

The U.S. military is taking precautions as Hurricane Dorian threatens ships and planes based on Virginia's coast.

U.S. Air Force Col. David Lopez said in a statement Tuesday that F-22 Raptor fighter jets and T-38 Talon training planes will leave Langley Air Force Base in Hampton. The planes will fly to the Rickenbacker Air National Guard Base outside Columbus, Ohio.

Meanwhile, the U.S. Navy is ordering ships on Virginia's coast to prepare to leave if necessary. Vice Adm. Andrew Lewis said in a statement that ships at the world's largest Navy base in Norfolk and other nearby installations will be ready to depart within 24 hours.

By heading out to sea, the ships will better protect themselves and reduce significant potential damage to piers, airplanes and other infrastructure.

Florida Gov. Ron DeSantis expressed some relief that Hurricane Dorian's track changed before hitting the state, but he warned residents near the coast to follow local emergency officials' instructions for evacuations.

DeSantis said that over the last week-and-a-half, Dorian forecasts had potentially all 67 counties in its path and people should stay safe and remain vigilant over the coming days.

Meanwhile in South Carolina, officials say nearly a quarter-million people have evacuated from that state's coast ahead of Dorian.

Secretary of Transportation Christy Hall said Tuesday that a total of 244,000 people have headed South Carolina Gov. Henry McMaster's order to leave the state's coast and head inland. That's nearly a third of the total of about 800,000 people officials have said they believed to be in the evacuation zone, which includes the state's entire coast.

Air Force Gen. Terrence O'Shaughnessy told reporters Tuesday it's too early to tell what U.S. military forces may be needed to help the Bahamas, which has suffered extensive damage from Hurricane Dorian .

He said the hospital ship USNS Comfort is a four or five day sail away and could be used for medical assistance. He said the military is also prepared to provide engineering, transportation and other help to reopen airports and fix the airfields.

O'Shaughnessy says the USS Bataan and its amphibious ready group, with thousands of sailors and Marines aboard, are also off the coast of North Carolina and could be used if needed.

Defense Secretary Mark Esper has already authorized 14 days of support to the Bahamas if needed. The U.S. Coast Guard is already providing logistics and search and rescue aid in the Bahamas, and has six helicopters there so far.

The center of Hurricane Dorian is finally moving away from Grand Bahama island but the U.S. National Hurricane Center says the island will continue getting dangerous winds and life-threatening storm surge through the evening.

The hurricane is centered about 65 miles (105 kilometers) north of Freeport and is moving northwest near 5 mph (7 kph).

Practically parking over the Bahamas for a day and a half, Dorian has been pounding the islands in a watery onslaught that devastated thousands of homes, trapped people in attics and crippled hospitals.

Meanwhile, Tropical Storm Fernand has formed in the Gulf of Mexico, prompting a tropical storm warning for Mexico's northeast coast.

As Hurricane Dorian pounds the Bahamas, a new tropical storm has formed in the Gulf of Mexico.

The storm's maximum sustained winds are near 40 mph (65 kph). The U.S. National Hurricane Center says slow strengthening is expected before the storm moves inland. It's centered about 160 miles (255 kilometers) east of La Pesca, Mexico, and is moving west near 7 mph (11 kph).

The Georgia Department of Transportation is reporting light traffic on the interstate highway being used as a one-way evacuation route for coastal residents fleeing Hurricane Dorian .

State officials Tuesday morning turned all lanes of Interstate 16 into an eastbound route from Savannah on the coast to Dublin about 100 miles (160 kilometers) inland.

The state DOT said in a news release the route was seeing "light traffic" Tuesday afternoon and cars were "running at the speed limit."

The agency urged coastal residents to evacuate before traffic on I-16 increased. Forecasters expect Dorian to approach coastal Georgia on Wednesday, most likely with the storm's center staying offshore.

Officials in the South Carolina city of Charleston are mulling putting a prohibition on price gouging info effect as residents continue to evacuate the coast ahead of Hurricane Dorian .

Anti-price gouging measures are often considered to protect motorists scrambling to move inland ahead of storms. Gov. Henry McMaster has ordered evacuations along South Carolina's coast, reversing a major interstate so that all lanes lead inland from Charleston, to accommodate more drivers.

Many areas of Charleston's historic downtown peninsula regularly flood with rising tides, a situation expected to become worse as the storm and its rainfall approach. City officials said they expected tides to increase significantly Wednesday afternoon into Thursday.

Officials in northeastern Florida are urging people to stay away from the beaches due to possible storm surge from Hurricane Dorian .

Flagler County Emergency Management Director Jonathan Lord said Tuesday that waves of up to 20 feet (6 meters) are expected along the area's Atlantic beaches as the storm moves toward the north.

He says there can still be "life-threatening if not deadly conditions at the beach."

Lord said storm surge is expected along the ocean and the Intracoastal Waterway.

Despite warnings, crowds also showed up to other Central Florida beaches ahead of the storm.

The Volusia County Sheriff's Office said in a statement that Thaylon Lewis and Joseph Colombo Jr. were arrested Monday evening after a deputy spotted one man taking the sandbags from a highway overpass and the other acting as a lookout. 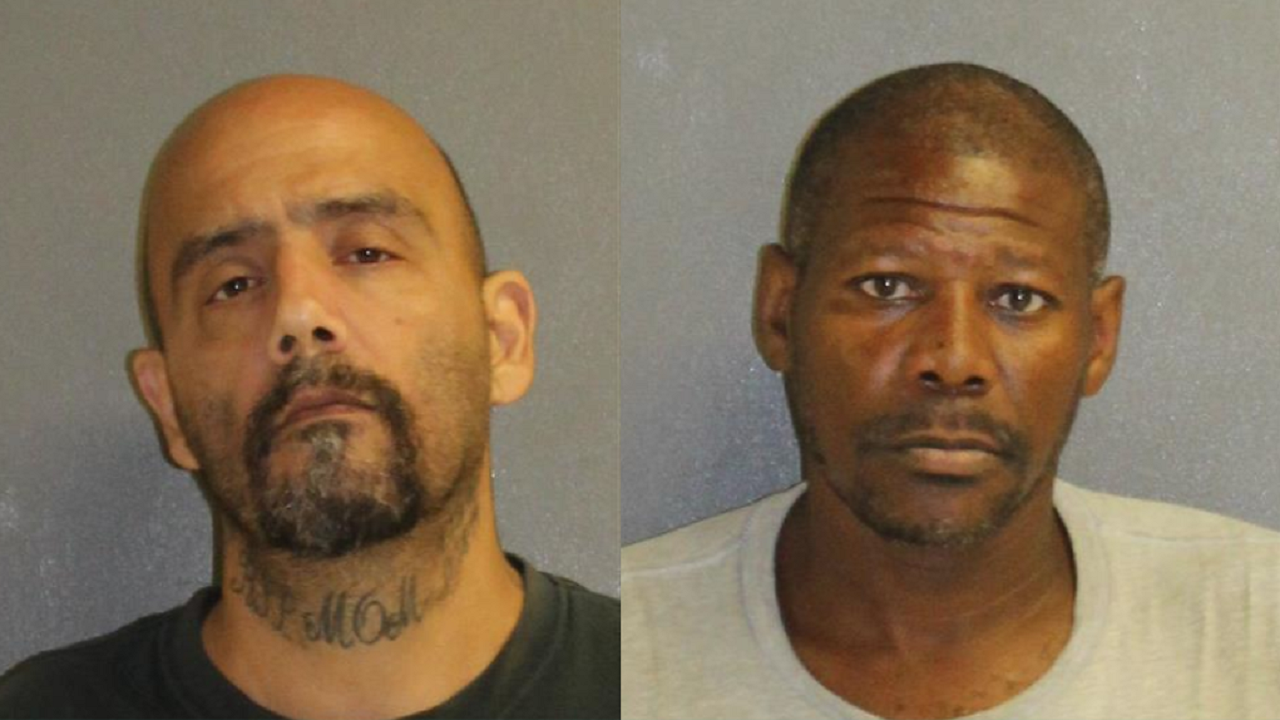 Lewis is charged with theft during a declared state of emergency, a third-degree felony. Colombo was also arrested for an injunction violation for possessing a firearm, a first-degree misdemeanor.

Online court records show no attorneys listed for the men.

Hurricane Dorian has weakened to a Category 2 storm as it continues to batter the Bahamas with life-threatening storm surge.

The U.S. National Hurricane Center says Dorian's maximum sustained winds decreased Tuesday morning to near 110 mph (175 kph). But it's expected to remain a powerful hurricane during the next few days.

Dorian is centered about 45 miles (70 kilometers) north of Freeport in the Bahamas and is moving northwest near 2 mph (4 kph).

He said Tuesday that the storm caused less severe damage in the neighboring Abaco islands and he hopes to send an advanced medical team there soon.

Sands said the main hospital in Marsh Harbor is intact and sheltering 400 people but needs food, water, medicine and surgical supplies. He also said crews are trying to airlift between five and seven end-stage kidney failure patients from Abaco who haven't received dialysis since Friday.

Dorian hit Abaco on Sunday with sustained winds of 185 mph (295 kph) and gusts up to 220 mph (355 kph), a strength matched only by the Labor Day hurricane of 1935. The storm then hovered over Grand Bahama for a day and a half.

A spokesman for the U.N. World Food Program said Tuesday that a team is ready to help the Bahamian government assess storm damage and prioritize needs. Herve Verhoosel says preliminary calculations show that 45,700 people in Grand Bahama island may need food, along with another 14,500 in the neighboring Abaco islands.

Meanwhile, a spokesman for the International Federation of Red Cross and Red Crescent Societies says some 62,000 people also will need access to clean drinking water. Matthew Cochrane says about 45% of homes in Grand Bahama and Abaco were severely damaged or destroyed and the organization will help 20,000 of the most vulnerable people, including a large Haitian community.

Georgia Gov. Brian Kemp said he ordered evacuations along the length of his state's coast, which includes several low-lying islands, because if there is flooding on causeways, they won't be able to get vehicles on or off the islands.

He said a reverse traffic or "contraflow" on Interstate 16 begins Tuesday morning.

The Category 3 storm has been battering the Bahamas, causing extensive damage and flooding.

Hurricane Dorian is beginning to inch northwestward after being stationary over the Bahamas, where its relentless winds have caused catastrophic damage and flooding.

The U.S. National Hurricane Center says the storm has started moving about 1 mph (2 kph) Tuesday morning and its speed is expected to increase slightly later in the day.

The storm is centered about 40 miles (70 kilometers) northeast of Freeport in the Bahamas.

Dorian has weakened to a Category 3 hurricane but continues to batter the Bahamas as it remains almost at a standstill.

At 2:00 a.m. EDT Tuesday, the ferocious storm's center was about 30 miles northeast of Freeport Grand Bahama Island. It has barely budged from that position since Monday afternoon.

But its wind speeds lessened slightly to 120 mph with higher gusts. That was down from 130 mph Monday evening.

The hurricane is about 100 miles east of West Palm Beach, Florida.

[MORE: How you can help Hurricane Dorian survivors in the Bahamas]

The National Hurricane center said Dorian is expected to move "dangerously close" to the Florida east coast late Tuesday through Wednesday evening and then move north to coastal Georgia and South Carolina on Wednesday night and Thursday.