Instead of a parade, Orlando celebrates MLK with holiday showcase

Knights fans go all out for 'College GameDay'

ORLANDO, Fla. – University of Central Florida Knights fans made it known behind the set of ESPN's "College GameDay" show: We mean business.

It's the first time the national show, which highlights a different college football game every week, has come to Central Florida, and  UCF fans were ready to show off their support.

Overnight Friday into Saturday, fans packed the area behind the ESPN stage set up on Memory Mall for the 9 a.m. show.

Fans were cheering so loudly it was hard to hear the analysts during the show.

"People were chanting, 'UCF, UCF' and they were booing when they put up (Kirk) Herbstreit on the screen and some of the other teams, like Cincinnati and 'Bama,'" Tina Shearon who attended 'College GameDay,'" said.

Shearon and her husband said they got to UCF around 7 a.m. to get their spots. They said they wanted to spend their 29th anniversary with the huge crowd.

Memory Mall was packed with fans filling the space around the stage.

An aerial photo tweeted by UCF showed hundreds of people with signs and banners on the mall lawn four hours before the show started. By 9 a.m. more than 1,000 chanting, excited fans had surrounded the mall.

"There's such a huge crowd and the turnout is amazing," Jessica Goicochea said.

Goicochea and her friend Jonathan Blain got their spots around 5 a.m. Blain said the crowd was just as excited hours before the show even started.

"No matter what time they came, they're very spirited. They're very excited about UCF and every single time they're up on stage and they say scream, they're energetic," Blain said.

Fans said UCF deserves this opportunity to be in the national spotlight.

"I think everybody will see what it's really like and give us some respect," Shearon said.

Fans used their creative sign-making skills to show support for the Knights, 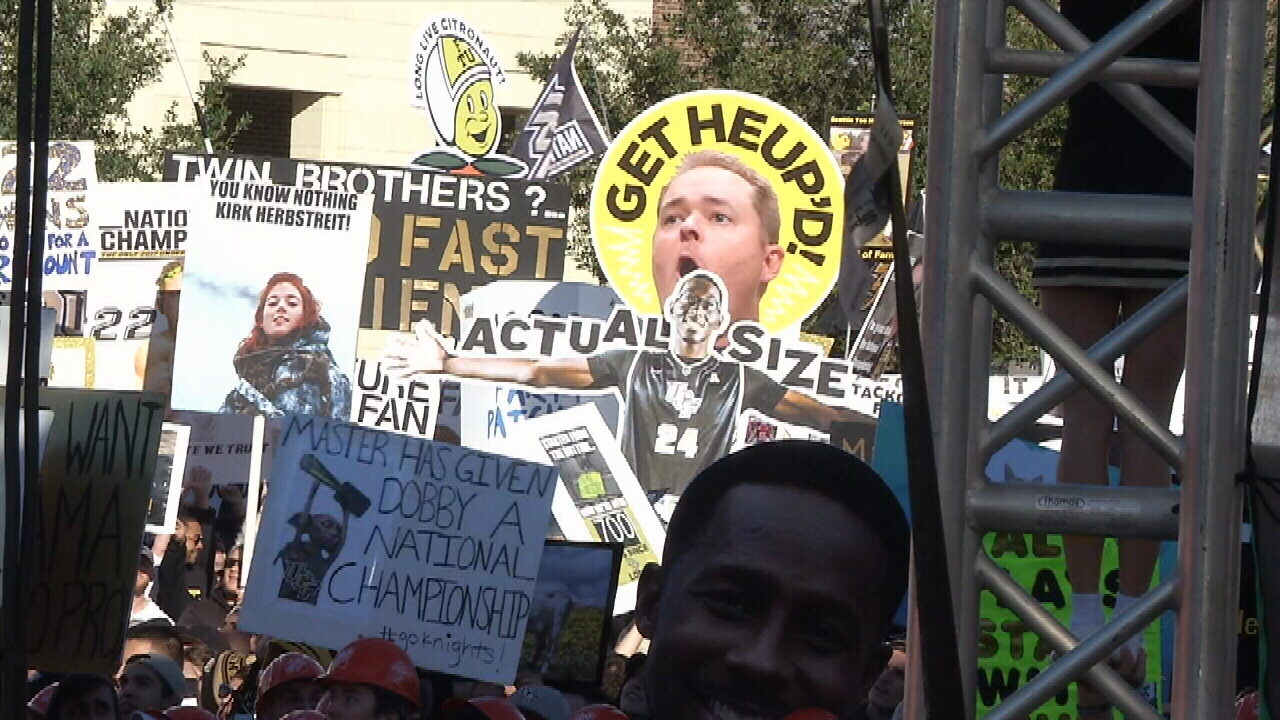 THEN WHAT ARE THEY?? pic.twitter.com/Jer4PRMRfH

Eleventh-ranked UCF is looking to extend the nation's longest winning streak to 23 games Saturday against 19th-ranked University of Cincinnati.

Kickoff at Spectrum Stadium is at 8 p.m.

6 things to know about UCF's game against Cincinnati

Here's a breakdown of 'College GameDay's' first-ever appearance at UCF

Amanda Castro, a proud UCF alum, joined the News 6 team in November 2015 and was promoted to weekend morning anchor in April 2016. Go Knights!