Our Solutionaries team has scoured the country for solutions to help employees, employers, companies and unions move forward... together!

SpaceX and NASA prepare to launch the next crewed mission to the International Space Station.

Looking back at Hurricane Ian 🌀

‘Everything is damaged:’ Osceola County family struggles after losing home to Hurricane Ian

'Angel looking down on us': Inside memorable baseball tribute in Anaheim

Was this actually real? Or was it a story so good to be true that people simply wouldn’t believe it?

When the Los Angeles Angels took the field against the Seattle Mariners on Friday, all eyes were on the fact each player wore jersey No. 45 in honor of deceased teammate Tyler Skaggs.

After the final out was recorded, even more eyes were on the jerseys as they were scattered all across the pitcher’s mound following what was more than just a rare feat on the baseball diamond.

It turned out to be a tribute that seemed so unbelievable in its coincidental numbers, a Hollywood producer might have thought it was too much of a fairy tale even for the big screen.

But the tears poured out and the slacked jaws on everyone who was a part of it and witnessed it said all that needed to be said: This was very much real, and it was incredible. 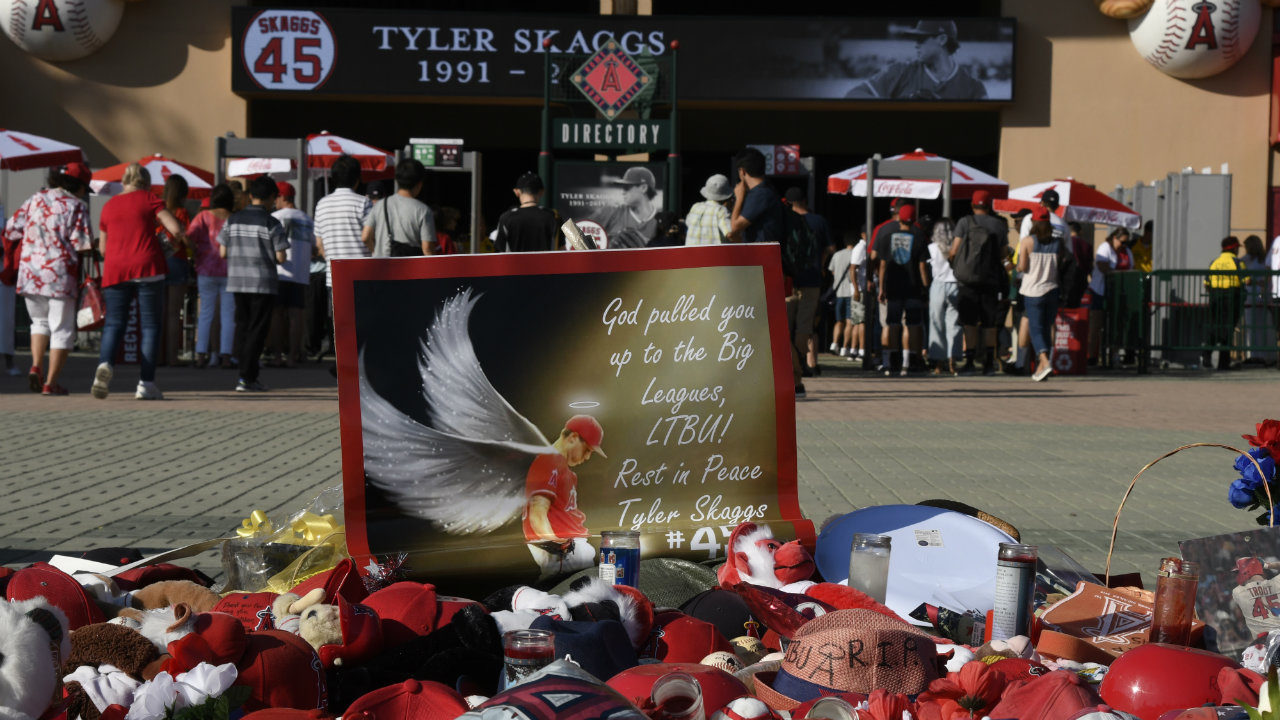 On July 1, the Angels were set to play a game at the home stadium of the Texas Rangers but never ended up making it to the stadium.

That afternoon, Skaggs, a left-handed pitcher for the Angels, was found dead in his hotel room.

He was 27, just 12 days short of his 28th birthday, and the game that night was postponed.

That has led to many unanswered questions since, with the most notable one being the cause of death.

It still hasn’t been determined, and autopsy results won’t be available until October.

Even though police have stated no foul play was discovered and no evidence of suicide was found, that hasn’t stopped people from speculating what really caused Skaggs to pass away so suddenly.

Regardless, the Angels have spent the days since July 1 trying to deal with the grief, shock and unanswered questions regarding their fallen teammate, and returned to play their first game at home in Anaheim on Friday since the tragedy took place.

Taking the field with each player wearing No. 45 in honor of Skaggs, even the Angels couldn’t have imagined what was about to unfold. 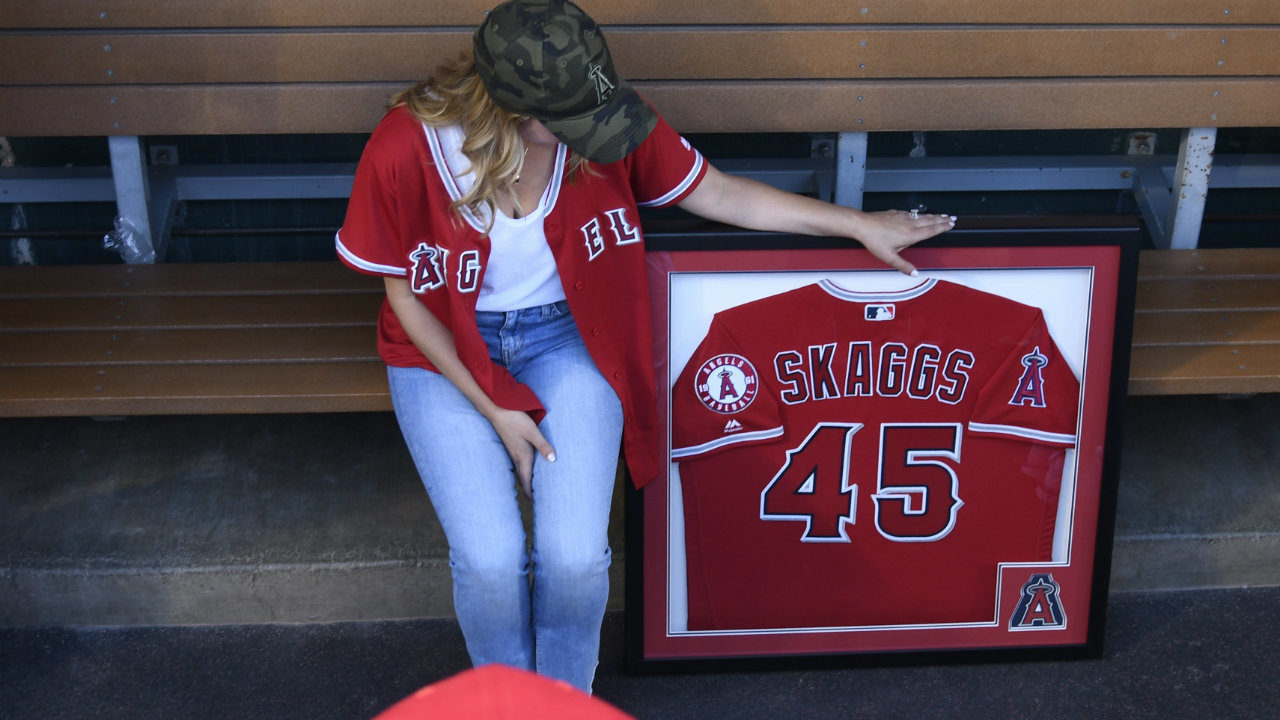 At Angel Stadium, fans built a memorial to Skaggs near the main gate, featuring letters, memorabilia and candles.

An image of Skaggs was planted on the wall in center field and also painted behind the pitcher’s mound.
His No. 45 was inscribed on the mound for everyone to see as well.

Before the game, Skaggs’ mother, Debbie, threw the ceremonial first pitch of the game, which was a strike right down the middle.

Just when it appeared as if the emotion couldn’t get any higher and the tribute to Skaggs any better, it did by a long shot.

Starting pitcher Taylor Cole started it off by throwing two hitless innings before being pulled for reliever Felix Pena.

Despite the rare occurrence of coming on in relief of a starter who didn’t allow a hit or run in the first two innings, Pena took it from there and found himself on the mound in the top of the ninth having not allowed a hit himself in six innings of work.

Pena then made it seven hitless innings, including a flyout and two groundouts to end the game and give the Angels a combined no-hitter, the 11th no-hitter in team history.

This was done while wearing the jersey number of Skaggs, although the symbolism didn’t end there.

By the angelic numbers 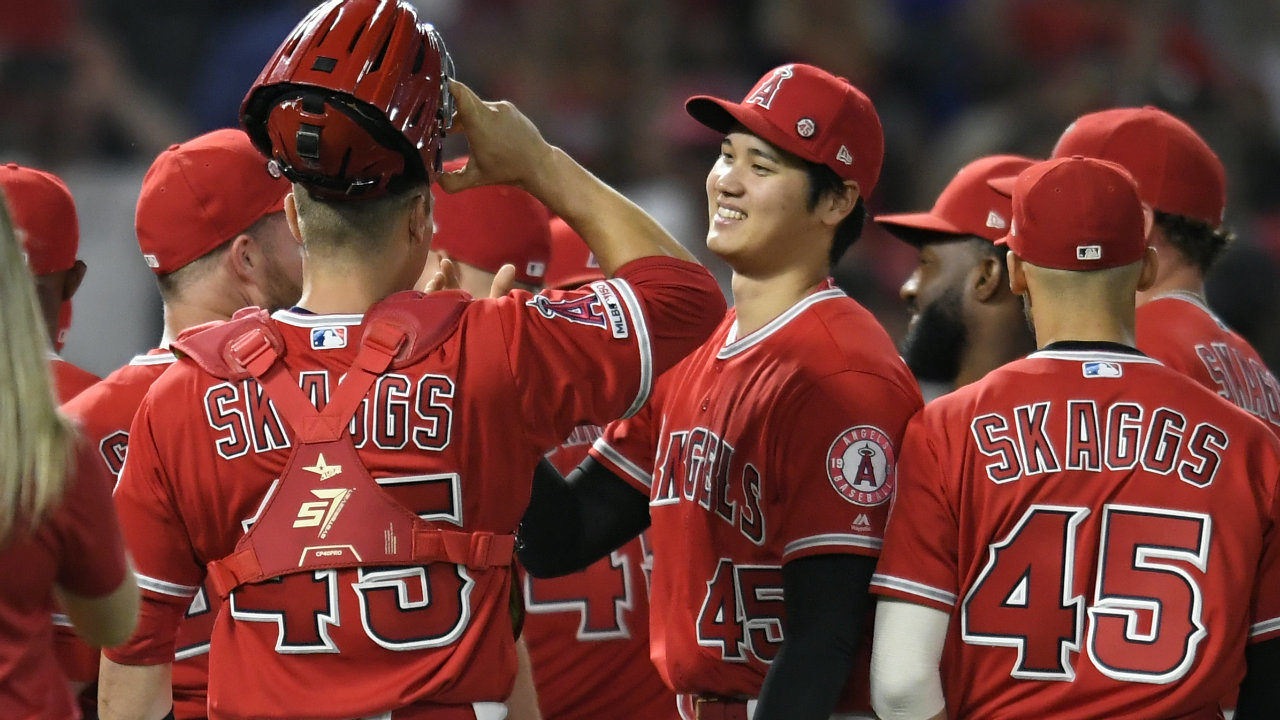 Skaggs’ 28th birthday would have been Saturday, and guess how many outs the Angels recorded since the only Seattle baserunner came courtesy of a walk? Yep, 28.

The last time there was a combined no-hitter in the state of California was July 13, 1991, the day Skaggs was born.

Speaking in Spanish during an on-field interview, Pena said on ESPN that “I feel like we have an angel looking down on us.”

During the on-field celebration, each player scattered his No. 45 jerseys on the mound, with Skaggs' picture lying on top of one of those jerseys on the rubber.

And yes, none of this was a scripted movie.

It was all real and visible for the world to see.

“After the game, you run out to the field, everybody’s celebrating,” said Angels pitcher Andrew Heaney, Skaggs’ best friend on the team. “I don’t know about everybody else, but I had tears in my eyes.”

Don’t worry, Andrew. It’s safe to say everyone else did too.