JACKSONVILLE, Fla. – The news keeps improving regarding a quiet hurricane season. The longest-running hurricane forecast group expects only three hurricanes for the remainder of the season.

WPLG-TV reports the probability for major hurricanes making landfall along the United States coastline and in the Caribbean is below normal due to the forecast for a below-average season. 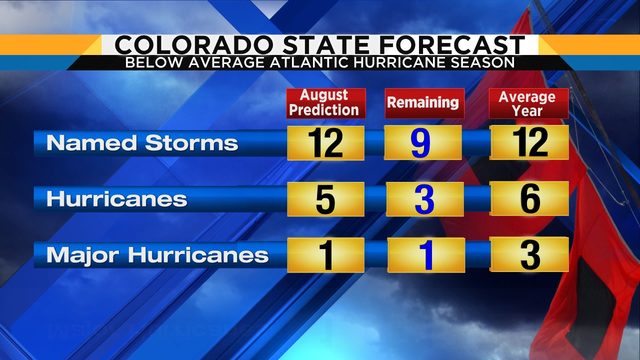 The group expects 12 named storms (including Alberto through Chris), five hurricanes and one major hurricane.

Before the hurricane season started, CSU expected a "slightly" above-average season but lowered storm expectations in the last two updates.

The biggest factor with this update are expectations that El Nino could develop over the next several months.

A long-term forecast model called the Climate Forecast System, hints at more vertical shear developing during the August through October active part of the hurricane season in the Caribbean and across the tropical Atlantic.

The good news for the next couple weeks is the tropics look quiet at a time in August when activity typically picks up due to a lack of moisture.

In fact, two out of three Category 5 hurricanes to make landfall in the continental U.S. have done so during August: Camille (1969) and Andrew (1992).

But water temperatures continue to stay cooler than average due to stronger easterly trade winds upwelling deeper cooler water to the surface, and this tends to suppress storm development or prevents major hurricane intensity.

This article is courtesy of WPLG-TV.

After covering the weather from every corner of Florida and doing marine research in the Gulf, Mark Collins settled in Jacksonville to forecast weather for The First Coast.