Change of plans: Some Brevard County beaches won’t be closing after all

Most impacts well out at sea

ORLANDO, Fla. – It won't be a washout for the weekend, but tropical downpours will be around, courtesy of Tropical Storm Humberto.

Rough seas and an extremely high rip current threat will be the main impacts as Humberto passes about 200 miles off of Florida's coast.

Showers will continue to move onshore on a southwest path. Most of the showers will be isolated to scattered and light to moderate for the most part.

There could be pockets of heavy rain, but the good news is they are fast-moving. Rain chances remain at 30% under mainly cloudy skies.

It will still be breezy Saturday night, turning windy Sunday. The northwest wind will gust near 20-30 mph. Most of the rain Sunday morning will be near the coast and then spread inland throughout the day. Rain chances remain between 30% and 40%.

Along the coast Sunday won't be the best beach day. The surf will still be high and waves large. Rip current risk remains high, as well, so if you dare enter the water, swim safely and near a lifeguard.

Small craft advisories remain in place until 5 p.m. Sunday. Seas will be up to 8-10 feet offshore and the intracoastal will be choppy. 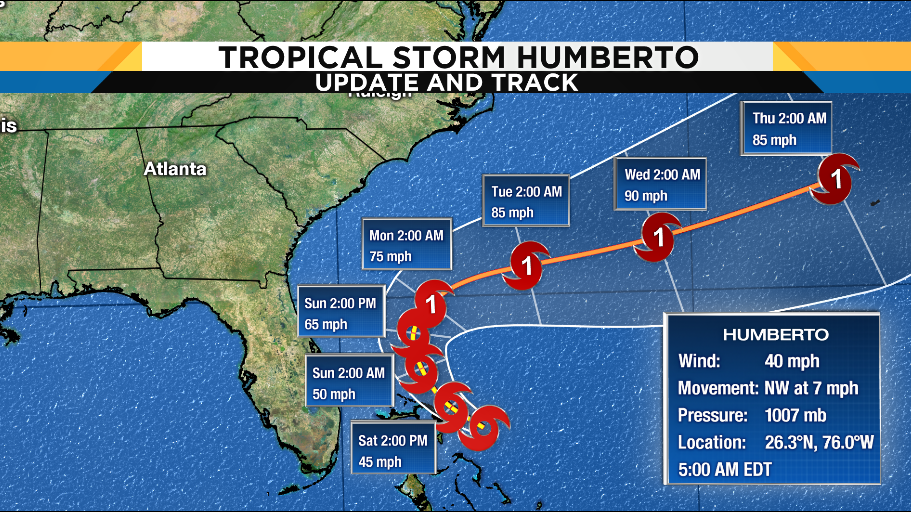 Over the next 24 hours, the National Hurricane Center expects the storm to move back east over the open waters of the Atlantic. There, conditions will be favorable for strengthening as it moves toward Bermuda next week.

The area in the central Gulf still has a low chance of developing as it moves toward the Texas coast next week.

The wave in the mid-Atlantic still has a moderate chance -- 60% -- of slow development as it moves toward the Lesser Antilles over the next five days. For now, it's no threat to us, but we will keep an eye on it and bring updates as they unfold.

Emmy Award Winning Meteorologist Samara Cokinos joined the News 6 team in September 2017. In her free time, she loves running and being outside.

Jonathan Kegges joined the News 6 team in June 2019 as the Weekend Morning Meteorologist. Jonathan comes from Roanoke, Virginia where he covered three EF-3 tornadoes and deadly flooding brought on by Hurricanes Florence and Michael.