A rip current statement in effect for Coastal Volusia Region

A rip current statement in effect for Coastal Volusia Region

Woman killed in rollover crash on I-4 in Orlando, troopers say

NASA needs new spacesuits; here's what's being done about it

Dava Newman on what it would take to replace aging spacesuits

After 40 years, NASA’s spacesuits used for astronaut spacewalks are nearing the end of their life cycle.

That means they would not support moonwalking astronauts if the agency makes its 2024 goal to return humans to the lunar surface, experts say. Additionally, NASA doesn’t have a clear path or the necessary funding to replace them, according to a News 6 Freedom of Information Act request.

While researchers and those within NASA have known for years the suits called Extravehicular Mobility Units, or EMUs, need to be replaced, the plight gained international traction in March after two medium-size upper torsos of the suits weren’t available for astronauts Christina Koch and Anne McClain, causing the first all-women spacewalk to be postponed. The spacewalk was completed as planned but Koch was joined by astronaut Nick Hague instead of her female counterpart.

The current spacesuits American and European astronauts use to conduct work outside the space station have been in use since 1978 with minimal updates, according to NASA’s advanced spacesuit capability plan.

NASA’s EMU inventory is also low. Between the hard upper torsos, bottoms and life-support packs, there are about 11 or 12 suits that are flight operational, according to a 2017 inspector general report. Some of those suits remain on Earth for astronaut training and only a handful are kept at the space station.

Essentially, the suits function as a personalized spacecraft, said Dava Newman, a professor of aeronautics and astronautics and engineering systems at MIT.

Newman, the former NASA deputy administrator during the Obama administration, is considered a pioneer in planetary spacesuit design. For more than a decade, Newman and her team at MIT’s Human Systems Laboratory have been working on a lightweight, form-fitting spacesuit, called the BioSuit for EVAs on Mars and the moon.

“The spacesuit is what I call the world's smallest spacecraft. It's amazing,” Newman said. “Imagine designing an entire spacecraft that provides your pressure, your air to breathe, scrubs out your carbon dioxide, take that spacecraft and shrink it around a person. And now I get to move in this gas-pressurized spacesuit.”

However, NASA's EMUs were originally designed in 1978 for short duration missions outside the space shuttle. They were used for work assembling the International Space Station. In 1993, NASA created a maintenance program to make the EMUs last well-beyond their original 15-year lifespan.

Now, astronauts perform six-hour EVAs outside the space station in the same suits.

“It's a workhorse. You got to give credit where credit's due. It is an amazing engineering system,” Newman said. “But it's very massive. It weighs about 140 kilos, that's pushing 300 pounds, is very immobile, because it's gas pressurized, but it's kept the astronauts alive.”

When asked if she thinks replacing the aging suits should be a priority for the space agency, Newman said “Yes, emphatically.”

“I worry about safety, and a system that is as complicated as an entire spacecraft coming to the end of its life cycle,” Newman said. “I am not fond of incremental --no new technology -- when we're sitting over here on a treasure trove of great technology and things that could make a mobile suit, make it much lighter.”

The problem, Newman said, is that NASA isn’t putting enough funding into outside research developing new EMU suits to prepare to retire the nearly 40-year-old suits and the current EMUs won’t support missions to the moon and Mars.

When the best fit doesn’t fit 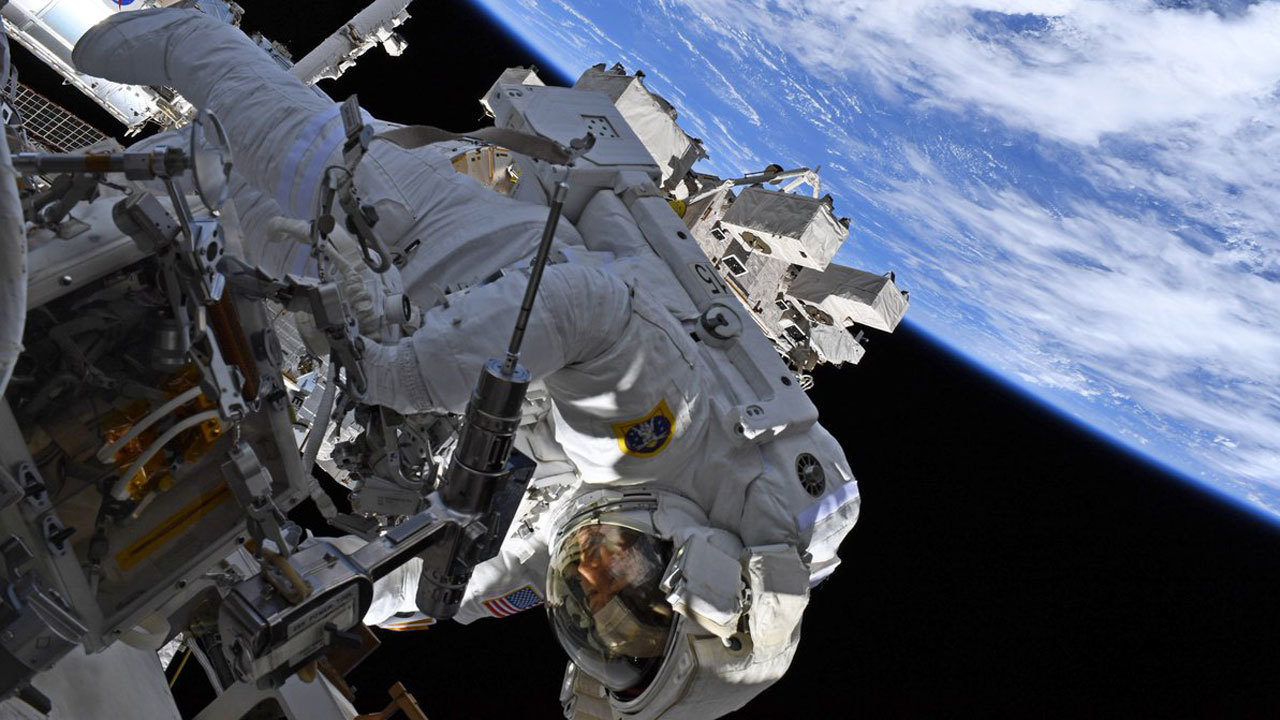 In March, the first all-women spacewalk didn't happen because there was only one medium torso ready and both Koch and McClain required the smaller fit.

According to NASA, the March spacewalk was originally planned to be completed by two men and that is one reason why the suits were configured in the larger sizes.

This means smaller astronauts, in particular women, must work in suits often several sizes too big.

Kathryn Sullivan, the first American woman to perform a space walk, told Outside magazine the suits aren’t designed for smaller individuals and can make it difficult to work in. Sullivan described how the knee joint on the EMU sat above her actual knee, making it hard to bend and work in.

“NASA was selecting women as mission specialists, and yet it had a space suit that could not allow them to do spacewalks,” Sullivan told Outside magazine.

The astronauts who work and live on the International Space Station -- some for six months to a year -- need to be able to make repairs and upgrades outside the 19-year-old orbiting laboratory.

In July 2017, NASA's Office of Inspector General asked the space agency to produce a plan by September 2017 for the design and replacement of the EMUs.

WKMG News 6 submitted a Freedom of Information Act request for the agency’s response to the OIG demands and all related reports for plans to replace the spacesuits.

Not much progress has been made in the last two years, NASA’s response revealed.

“As of (June 3), NASA has not made a formal decision to replace the EMU fleet with advanced
EVA system capability,” a response from NASA FOIA officer Robert Young read. “Although the OIG report appears to state more affirmatively NASA’s intentions to replace the ISS EMU fleet, that decision is still under evaluation by NASA.”

According to NASA’s response to the inspector general, the space agency is relying on contractors but is primarily designing the EMU replacement in house and has spent $250 million toward an exploration class EMU, or xEMU.

The xEMU uses the same pressurized system the current EMUs use but with added movement.

The overall goal of the xEMU project is to provide the foundation to replace the current EMU, explore suit development and possible commercialization of EVA capabilities, according to NASA's statement to WKMG News 6.

“They're trying to put in some locomotion into a very big, heavy, bulky gas pressurized system, it has some increased mobility compared to the current state,” Newman said.

If the xEMU will actually improve the experience for spacewalking astronauts, Newman said, “it’s hard to get worse.”

NASA plans to launch and test the xEMU in the mid-2020s on the International Space Station. However, the space station is only funded through 2024.

If NASA wanted to completely replace the EMUs as soon as possible, the former NASA deputy administrator estimated it could be done in about three years.

However, “NASA is not funding advanced research and technology and students” of life support system development, like the BioSuit, Newman said. “It's not just mine, just across the board.”

“If we were fully funded, we'd have in three years -- three years of further development and testing -- we could have a serious system for partial gravity for the moon or Mars.”

Olympic athlete in a spacesuit

The last time NASA had planetary spacesuits with enough hip mobility to allow a person to walk around was during the Apollo era. While NASA spacesuit technology is at a stalemate, research in the field has continued to progress outside of the agency.

“If you look back at Apollo astronauts and (photos) of them doing the spacewalks on the moon you actually notice the iconic white space suit looks really gray,” Manyapu said.

“That's because once we went to the moon we realized that dust was such a big problem because there's no atmosphere on the moon and the dust there is very sharp and abrasive and it actually sticks to anything that comes into contact.”

Manyapu, who specializes in planetary spacesuits, is developing and testing a technology that would help keep those suits clean on the moon and, eventually, Mars.

Inspired by superheroes, Manyapu nicknamed her technology the spiderman suit. It uses charged carbon nanotubes to repel the dust off spacesuits.

“When you actually look at the suit itself and how it's going to be made, it almost looks kind of like a spider's web on the top and hence I named it spiderman,” Manyapu said.

If NASA plans to return humans to the moon for long-duration missions, Manyapu said the astronauts will require more durable materials to work and live in.

“We need to come up with the technology that can self sustain the suits and help the astronauts be more productive and we're able to achieve our science goals,” Manyapu said. 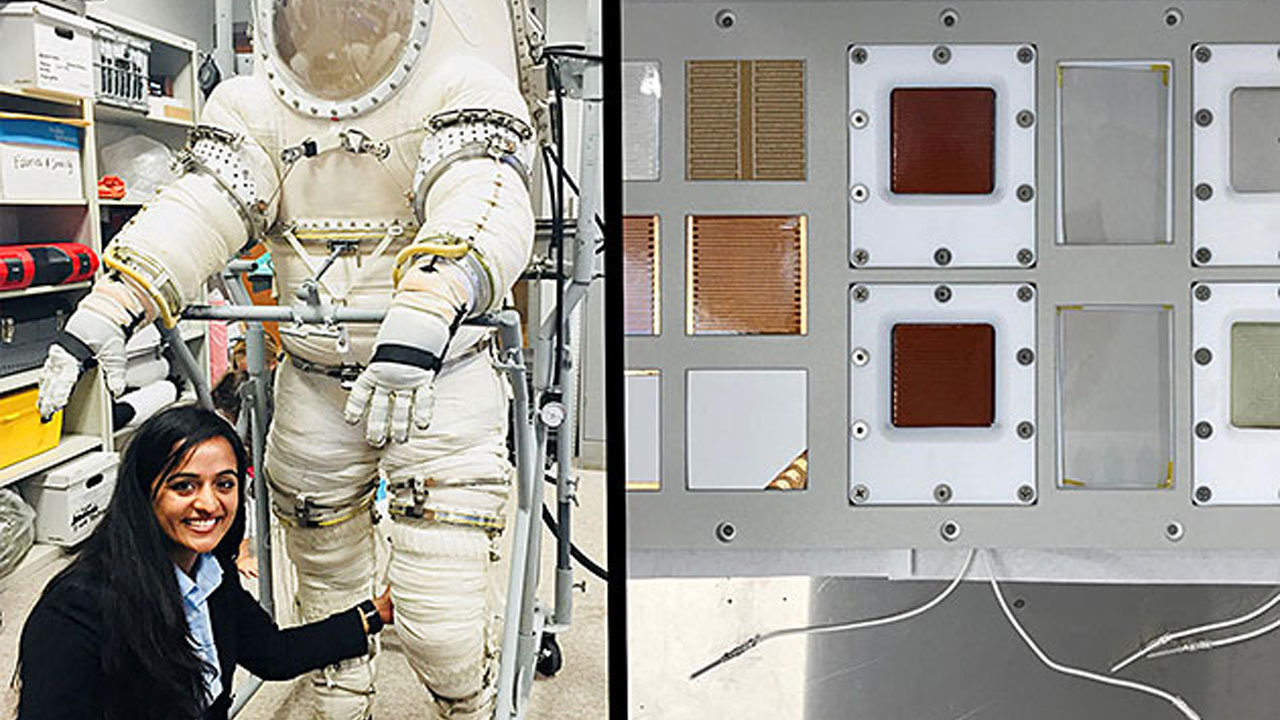 After the White House administration change, Newman returned to the Human Systems Laboratory at MIT where she has continued working on materials and technology that could support human exploration on other planets.

Unlike the massive, balloon-like EMUs, the BioSuit Newman and her team have been testing is form fitting, like a second skin, that would allow astronauts to work--for the first time-- with a full range of motion.

“To get someone to become a planetary geologists and we're going to Mars to search for life. So we need an Olympic athlete type of capability in a spacesuit,” Newman said.

Not only would the skin-to-skin counter pressure suit be lighter and allow for more mobility, it’s also safer, argues Newman.

“While an abrasion or micrometeor puncture in a traditional suit would threaten sudden decompression — puncturing the balloon and causing a major emergency and immediate termination of the EVA — a small breach in the BioSuit could be readily repaired with a kind of high-tech Ace bandage to cover a small tear,” Newman wrote in Ask Magazine.

Exploring the moon and Mars will require two different life support system, or backpacks, because Mars has an atmosphere, but essentially the suits could be the same, Newman said.

In 2017, the Florida Institute of Technology in Melbourne and Embry-Riddle University in Daytona Beach both established laboratories to develop spacesuits and supportive hardware to be worn inside a spacecraft or space station.

Both labs are focused on spacesuits that will support space tourists, or private astronauts, during launch, reentry and landing.

“We are trying to understand pretty much everything about human space flight,” said Nick Lopac, research manager at the Embry-Riddle University’s SUIT Lab.

The SUIT Lab is working on technology to increase mobility for astronauts working in spacesuits, what researchers at Embry-Riddle call the “human factor.”

“You are considering the psychology of this technology from the humans perspective,” Lopac said. “The astronauts complain that their hands are fatigued - they come out of these EVAs extremely tired because the mobility of the suit is fighting them.”

In July, the International Conference on Environmental Systems, dedicated to research to support humans living and working in space and other extreme environments, convened in Boston.

Newman’s team from MIT presented at the conference and she’s excited about the progress others are doing in the field.

“We need a planetary suit," Newman said. “I'll keep working on it until I get my people to Mars.”

This story is part of "Florida's Space Race: The Next Step," airing July 16 on WKMG News 6 in honor of the 50th anniversary of the Apollo 11 launch and moon landing. Visit ClickOrlando.com/moonlanding for more coverage and tune in July 16 for a full day of space-related coverage.