1 person in stable condition after shooting in Oviedo

MOUNT DORA, Fla. – Art is in the eye of the beholder, and the city of Mount Dora is seeing something different than what an artist who painted a mural at a house downtown saw.

Artist Richard Barrenechea was hired a few weeks ago to paint a wall surrounding the home of Nancy Nemhauser. Last week, once he was halfway through painting his vision of van Gogh's "Starry Night" mixed with a mural of Mount Dora, he says the homeowner got a notice of a code violation.

"She got the permission to do the painting on the wall with no restrictions and next thing that we know, when we are halfway with the project, she got the violation notice on the door and the graffiti code," Barrenechea said.

The notice on the door said the mural violated two city codes, and called the painting "graffiti."

"This is, this is not graffiti," Barrenechea said, pointing to the 140-foot wall he spent more than 60 hours working on. "It's crazy."

"Anything that has writing, pictorials, any kind of artwork that's considered signage, in a residential area, you can't have that," McDonald said. "We have certain codes we have to follow and, you know, art is in the eye of the beholder."

Eustis resident Michelle Perrier thinks the mural is beautiful and wants it to stay, especially in a town such as Mount Dora, which is known for its art festivals.

[View the citation below]

"You have two art festivals here, huge art festivals, every year," Perrier said. "You want to encourage that, not discourage it, and I think there is too much government in people's business."

Mount Dora resident Mason Allen feels the mural is too much for the town.

"Well, it's a little overpowering for the pace of our city," Allen said. "I think because, like any city decision, if you allow one person to paint this, then anyone downtown can do the same thing."

The conflict over the mural was a topic of discussion Tuesday night at Mount Dora's council meeting, where Barrenechea said he and others who support him fought for the mural to stay. People stood in front of the City Council, defending a mural that sits on the back side of a homeowner's wall in downtown Mount Dora.

"It's going to be bad for the city, bad for advertising. I mean, all art lovers, I'm pretty sure they are going to be disappointed. We need murals. We need colors. We need that," he said. "I'm just hoping for a positive resolution."

"Art is so subjective, as you all know. Whether you like the artist's work or not, I think that we have to be really
careful," one resident said.

The city told residents it is taking all their comments into consideration and the mural will be discussed at a later time.

"I think the city should reconsider the situation. Obviously, it's not a violation. It's not graffiti," Barrenechea said. "They're going to take some time to think about it and they're going to be careful about it. Hopefully, we can get something positive from that." 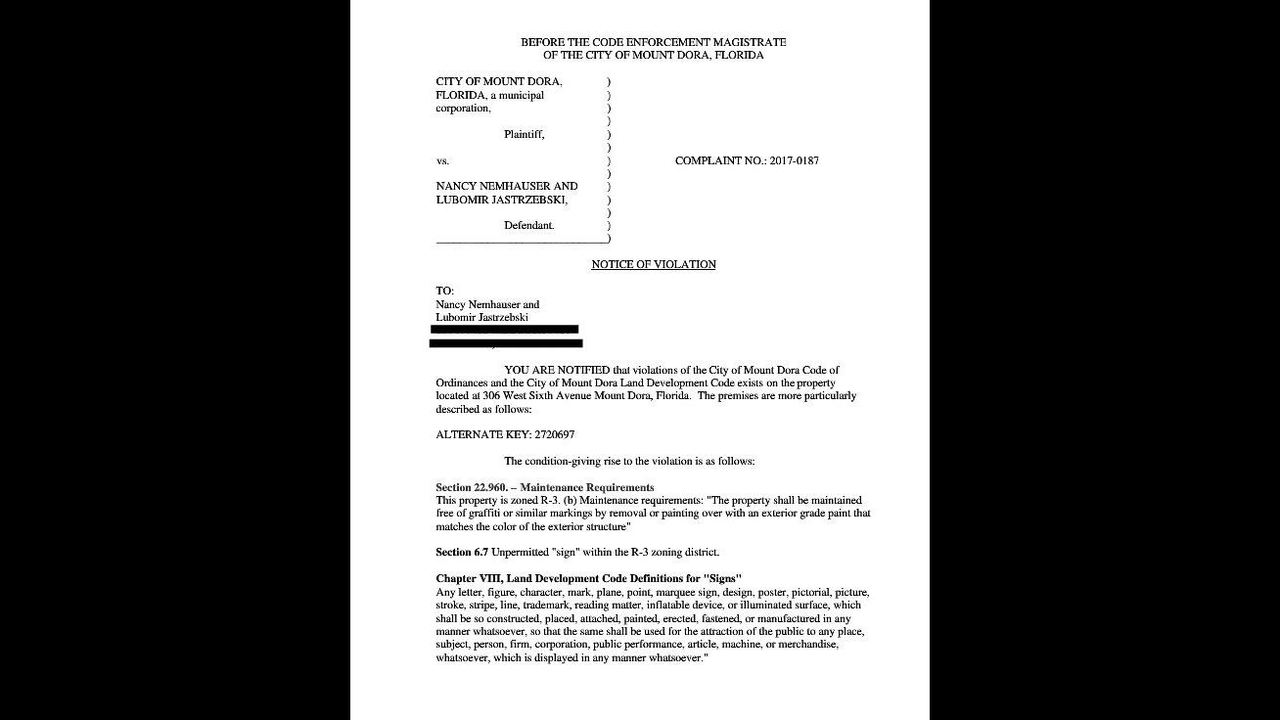 The city said the item will be added to the agenda for a meeting later this month.

Until then, McDonald says, the homeowners are in violation and have until Aug. 15 to repaint the wall. If not, they will be charged $250 a day.

The homeowner already plans to appeal.

Nadeen Yanes joined News 6 as a general assignment reporter in 2016. She grew up in Leesburg and graduated from the University of Florida. Nadeen has won three Associated Press Awards for her reporting on the Pulse Nightclub shooting, the trial of the Pulse gunman's wife and the capture of an accused cop killer, Markeith Loyd.