How UCF is addressing the nurse shortage

Man in custody after carjacking outside of smoke shop in Deltona, deputies say

JACKSONVILLE, Fla. – The mother of a 5-year-old girl reported missing from Jacksonville last week is now a person of interest in her daughter's disappearance, Jacksonville Sheriff Mike Williams announced Monday.

The search for Taylor Rose Williams expanded west into Alabama, where the girl's mother is originally from.

Sheriff Williams asked anyone who saw Taylor and her mother, Brianna Williams, together between Jacksonville and Alabama in the last two weeks to call the Sheriff's Office with that information. The number is 904-630-0500.

He said Brianna Williams was believed to have been driving her black 2017 Honda Accord, which has tinted windows and black rims.

As dozens of members of the Jacksonville Fire and Rescue Department's Urban Search and Rescue team traveled to Demopolis, Alabama, to continue searching for Taylor, Sheriff Williams said Brianna Williams is considered a person of interest in her daughter's disappearance.

He said she hasn't spoken to police since Wednesday and is not cooperating with the investigation.

He said the USAR team, which left town in the early afternoon from the department's training academy, will coordinate with local authorities as they continue searching.

The firefighters are specially trained for searching for missing people in criminal cases and after natural disasters. The department K-9 unit was also dispatched.

"We absolutely hope to find her alive," Sheriff Williams said. "We feel pretty comfortable that this is the right step to take."

Multiple sources said they will look in a 30-square mile grid in a rural area in Alabama, where her mother, Brianna Williams, grew up.

Interim Fire Rescue Chief Keith Powers declined to comment about the crew's mission as they left town, saying it was part of a JSO investigation and that details would come from the sheriff.

Firefighters said they expect to be on the assignment for up to seven days.

The investigation into Taylor's disappearance began at 7:22 a.m. Nov. 6 at a home on Ivy Street where Brianna Williams told police she last saw her daughter in bed the night before. Hundreds of officers, along with K-9 teams and mounted units searched extensively for two days. 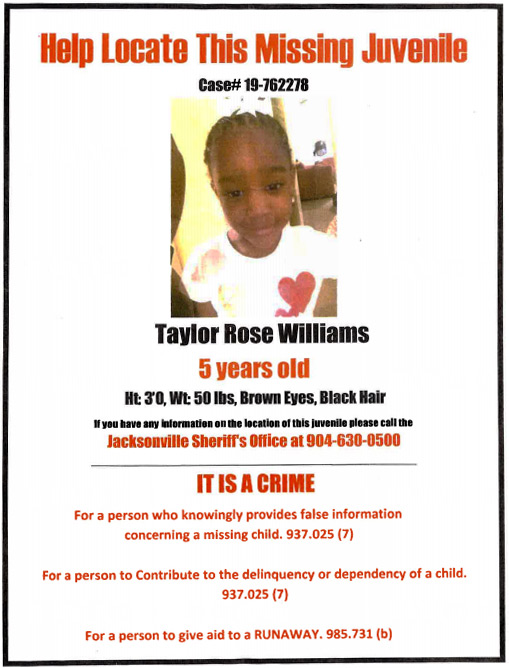 Community members spent hours handing out flyers, knocking on doors, and combing through the neighborhood for any sign of the little girl.

The sheriff said the mother stopped cooperating with police the second day of the search after detectives pointed out inconsistencies in her story. Sheriff Williams also asked for anyone who had seen Brianna Williams together with her daughter in the last six months to contact call police at 904-630-0500.

In the first few days after an Amber Alert was issued for Taylor, the Jacksonville Sheriff’s Office said it received hundreds of tips from the community, but none so far leading to her whereabouts.

Sheriff Williams said last week than Brianna Williams is not considered a suspect in her daughter’s disappearance. Police are hoping she will cooperate with the investigation as they work to piece together what happened to Taylor.

The search will be centered around Demopolis, a small town of about 7,000 people, located just west of Montgomery.

Chief Rex Flowers with the Demopolis Police Department said Sunday that the department is assisting the FBI, SBI and out-of-state agencies in the search of a missing person in and around the Demopolis area. News4Jax is working to confirm if this search is connected to Taylor Williams.

The Demopolis Police Department is currently assisting the FBI , SBI and out of state agencies in the search of a...

An Amber Alert remains in effect and the reward for information in her case is $4,000.

Ashley Harding joined the Channel 4 news team in March 2013 and reports every weekday for The Morning Show.