Optimize your workout routine with this $40 fitness watch

Grow your wealth with these courses on day trading, technical analysis

After becoming the first NASA astronauts to launch from Florida in nine years, astronauts Bob Behnken and Doug Hurley are reflecting on how flying in their previous spaceship, the space shuttle compares to their new ride built by SpaceX’s the Crew Dragon spacecraft.

Hurley and Behnken launched from Kennedy Space Center on a SpaceX Falcon 9 rocket Saturday at 3:22 p.m. after Crew Dragon separated from the rocket it took about 19 hours for the spacecraft to arrive for docking at the International Space Station. During that journey, traveling at 17,500 mph at times, the test pilots and astronauts got to be the first to try out the brand new spacecraft.

On Monday, in a call from the space station, both astronauts and their fellow station crew member NASA astronaut Chris Cassidy reflected on how it felt and looked to fly in Crew Dragon and see it approaching the ISS.

Both Hurley and Behnken said launching on Falcon 9 was very different than the space shuttle. Hurley described Falcon 9 as a “pure flying machine.”

“The Falcon 9 is a liquid-fueled rocket. Remember shuttle had solid rocket boosters to start with, those burned very rough for the first two and a half minutes," Hurley said. “The first stage with Falcon 9 with the 9 Merlin engines and roughly the same amount of time and it was a much smoother ride.”

Hurley said he and Behnken both felt the difference when the Falcon 9 first and second stage separated during launch.

“At that point, we go from roughly 3 Gs to 0 Gs ... when that Merlin vacuum engine fires then we start accelerating again for the next 5-6 minutes until we achieve orbit so totally different than shuttle,” Hurley said. “It was smooth and got a little rougher as Bob had mentioned before with the Merlin vacuum engine and it’ll be interesting to talk to the SpaceX folks to find out why it was a little bit rougher ride on second stage than it was for shuttle on those three main engines.”

“We didn’t even need to look at the speed you could tell just by how the rocket felt,” Hurley said.

Behnken said he hoped the launch would be like “Groundhog Day” for the two veteran astronauts.

“There’s plenty of excitement when you ride a rocket and we prefer the term as Demo-2 Dragon drivers versus Dragon riders,” Behnken said. “But when you go through that there’s certainly a ton of excitement to go along with all that as well.”

Crew Dragon is completely autonomous, meaning the astronauts don’t need to intervene in the flight unless there is reason to. On the flight to the ISS and just before docking Hurley got to take over controls of the spacecraft to fly is manually.

“Most folks are familiar with the fact that dragon is designed to be totally automated from the time it launches until the time it returns to Earth, but if there’s any systems failures or other issues we’d like to know with confidence that if we take over manually the vehicle will do what we, what we needed to do,” Hurley said.

Both astronauts have been training on simulators at SpaceX headquarters in Hawthorne, California for years for this moment.

“Flying the dragon was exactly how we expected it to be and that was one of the reasons we wanted to do the manual flight test twice,” Hurley said. “It’s all to prove that that capability works for future crews if need be." 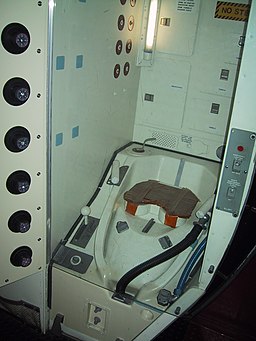 Image above of space shuttle toilet on display at Johnson Space Center in Houston.

Finally, the question everyone wants to know: How is the Crew Dragon toilet? Hurley and Behnken have been repeatedly asked about the bathroom situation on the spaceship but hadn’t been able to answer based on experience. On Monday, the astronauts were ready to be asked about the space commode.

“Let’s see the toilet. I think we had a bet to see when that question was going to be asked about Dragon, and it works very similar to the one we were used to in the space shuttle and it worked very well we had no issues with it,” Hurley said.

Overall both astronauts were please with the SpaceX vehicle, singing its praises.

“It’s done just absolutely spectacularly, you know, it’s a it’s a very clean vehicle,” Hurley said. “I think most people think it’s a really cool looking vehicle. I know my son thinks so, and it does everything we needed to do for this mission so we’re very happy with that part of it.”

Cassidy said he and the two Russian cosmonauts on board the International Space Station couldn’t see the launch but they flew over Kennedy Space Center a few minutes to liftoff.

On Sunday, the astronauts could see the bright light of Crew Dragon as it began to approach.

“We were looking out the cupola window we saw it very far away about 1,920 kilometers, and then it got brighter and brighter and bigger and bigger,” Cassidy said. “And it struck me that, that little tiny dot was going to be fixed to a piece of metal that was about 15 meters from where I was where I was standing.”

Cassidy said watching from afar was awe-inspiring. He and Hurley have previously flown on the shuttle together.

“I realized that inside that spacecraft were two of my colleagues and friends, and they’re going 17,500 miles an hour and we’re going 17,500 miles an hour, and we are bringing these two vehicles together with the computer,” Cassidy said. “And so from a technical nature I was pretty amazed at the whole thing just realizing what was happening, but then it folded into that the historic aspect of the whole day, and what it means to America what it means to our nation’s space program, what it means to international cooperation and commercial cooperation.”

How were the SpaceX spacesuits?

Behnken said he would give the sleek black-and-white SpaceX spacesuits “a five-star rating.”

“Each suit is point-designed for a very specific mission. This one is point-designed for us to sit in our seats and protect us if there’s a fire or any sort of a problem with the atmosphere onboard Dragon ... these suits didn’t have to do that job for us, which was nice, but it was clear that they were ready, we had great checks of the suits as we continued uphill and pre-launch and I just can’t say enough about the SpaceX team.”

Hurley said the custom-designed suits are very comfortable and they had a lot of time practicing getting in and out of the suits.

“They were actually much easier to get in and out of in zero G as we figured out over the course of the two days,” Hurley said. “We complemented the suit team. Those things worked very well, and everything we expected going uphill.”