Man shot in back in Daytona Beach after hit-and-run crash, police say

ORLANDO, Fla. – Hurricane Irma is still being monitored closely Saturday as it was downgraded back to a Category 2 storm with wind speeds of 110 mph.

Intensity is expected to continue fluctuating the next few days, but it is expected that Irma will continue to see intensity strength between categories 3 and 5 during the next week or so, News 6 partner WJXT reported.

"It is still too early to tell if this will affect us in Central Florida," News 6 meteorologist Madeline Evans said.

[RELATED: Live coverage of Harvey flooding in Texas | How did bubble-wrapped home do in flood?] 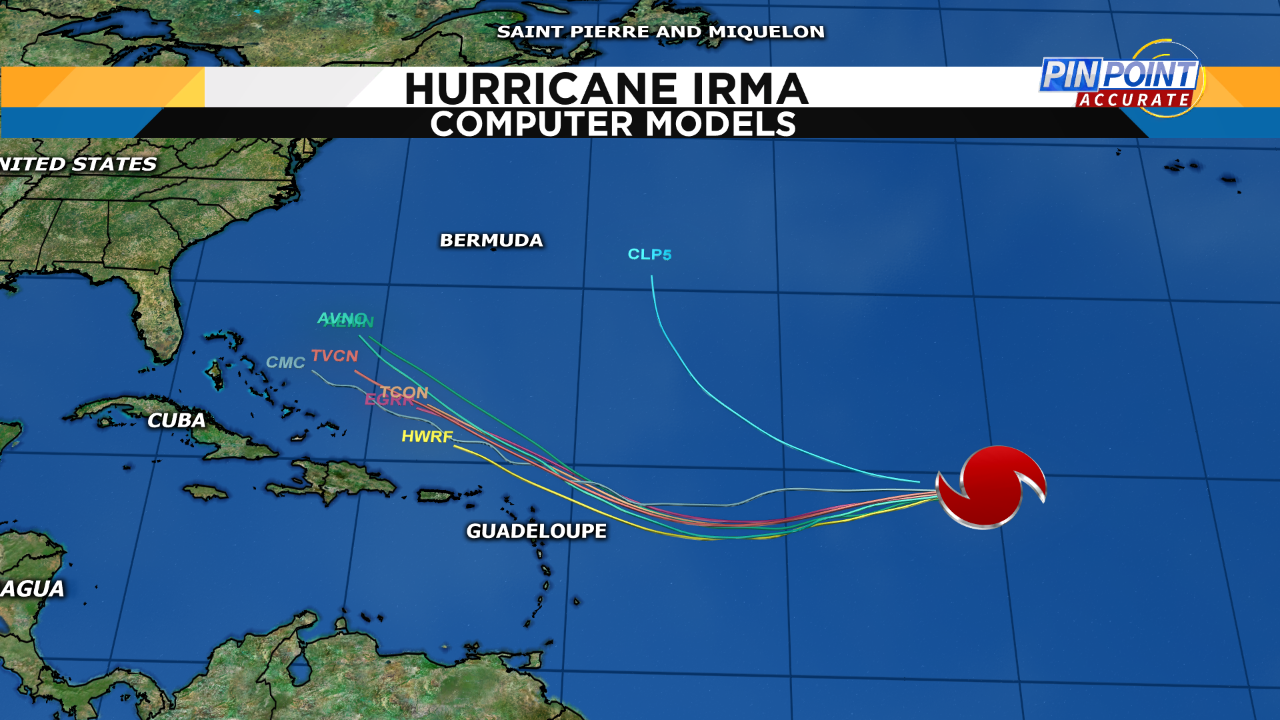 Because it is still early, there is no definite path that the storm is expected to take. U.S. and European computer models show Irma heading in different directions.

The storm's path will be more accurately reflected toward the beginning of next week.

It is important to keep an eye on the storm's intensity, as its category can help people prepare for the potential damage it could bring.

As a Category 2 storm, Hurricane Irma's wind speeds could fluctuate between 96 and 110 mph and cause extensive damage, according to the National Hurricane Center.

There is another tropical wave behind Irma that has a 60 percent chance of tropical development within the next five days.

Meanwhile in Central Florida, the holiday weekend is off to a soggy start, but it isn't expected to last.

Heat, humidity and rain continued as lightning storms moved across Central Florida at 15-20 mph Saturday afternoon. The storms brought some heavy downpours and gusty winds along with them, but the rain is expected to clear up before midnight.

Temperatures are expected to stay in the mid-to high 80s Saturday, with Orlando reaching a high of 90 degrees.

"It's not a bad day for the beach, if you head out early," Evans said. "Daytona will reach a high of 88, with the water temperature at 83 degrees. There is a moderate rip current risk."

Temperatures will reach lows of 74 degrees in Orlando and Palm Bay Saturday night and 71 degrees in Ocala. There is a 60 percent chance of rain in the early evening.

There is a 30-40 percent chance for rain both Sunday and Monday and highs will range from 89 to 92 degrees in Central Florida.

Temperatures will remain in the 90s for the remainder of the week and there is a 60 percent chance for rain.

As August ends, the tropics continue to heat up. Remember Hurricane season peaks Sept. 10. On average, about 35 percent of storms develop during the month of September, with a gradual decrease in October and November. Not only does activity ramp up, but the strength of the storms also rise. One of the biggest factors being the warmer waters over the Atlantic, Caribbean Sea and the Gulf of Mexico.

Earlier this season, the National Oceanic Atmospheric Association predicted an above-average season. It expects up to 19 named storms, including nine hurricanes with five becoming major hurricanes. So far this year, nine named storms have developed with four of them reaching hurricane status, including Harvey.

Moving into the second half of the season, activity is expected to intensify quickly through the end of November.

Watch News 6 and stay with ClickOrlando.com for updated models of the storm's path.