Woman killed boyfriend by zipping him inside suitcase, leaving him alone for hours, deputies say

News 6 is counting down before Disney World's 47th birthday

As Walt Disney World marks its 47th birthday and Epcot marks its 36th, News 6 is counting down with:

While it was meant to be an opening day attraction, this deceptively complex ride needed about four more months to make it work.

In no small part it was due to its incredible opening scene: Meeting Dreamfinder, watching him make Figment appear and then explaining a little of how our imaginations work. Did I mention this whole thing was choreographed so his DreamCatcher ship followed along at the same speed as your ride vehicle for three minutes so you didn't have to stop? That's some imagination at work right there.

The rest of the ride was chock-full of a variety of illusions and projections, as well as the first laser used in an attraction. Another first? Being that it was sponsored by Kodak, all the way back in 1983 the ride snapped your electronic picture at one point and showed it to you minutes later as part of the finale.

EPCOT Center was both meant to be -- and criticized for being more adult than the Magic Kingdom -- but Journey Into Imagination was the new park's Fantasyland. Its centerpiece ride could and should have been upgraded. Instead, it was gutted and vastly shortened because Kodak insisted Disney create something new.

Careful what you wish for.  The 11-minute original ride closed in October 1998. The five-minute-long Journey Into Your Imagination opened almost exactly one year later, playing off the idea of the "Imagination Institute" featured in the 3D film "Honey, I Shrunk the Audience" next door.

Guests hated the Figment-free version of the ride so much and so vocally, JIYI closed just two years later. Eisner freed up a few million for a six-month makeover to slap Figment all over everything. That less-disastrous 3.0 version of the ride Journey Into Imagination With Figment opened in mid-2002.

That means it's been open for 16 years, one year longer than the original. Maybe if we all use our imaginations, we can see a Future World with a 4.0 version that uses the entire building again. 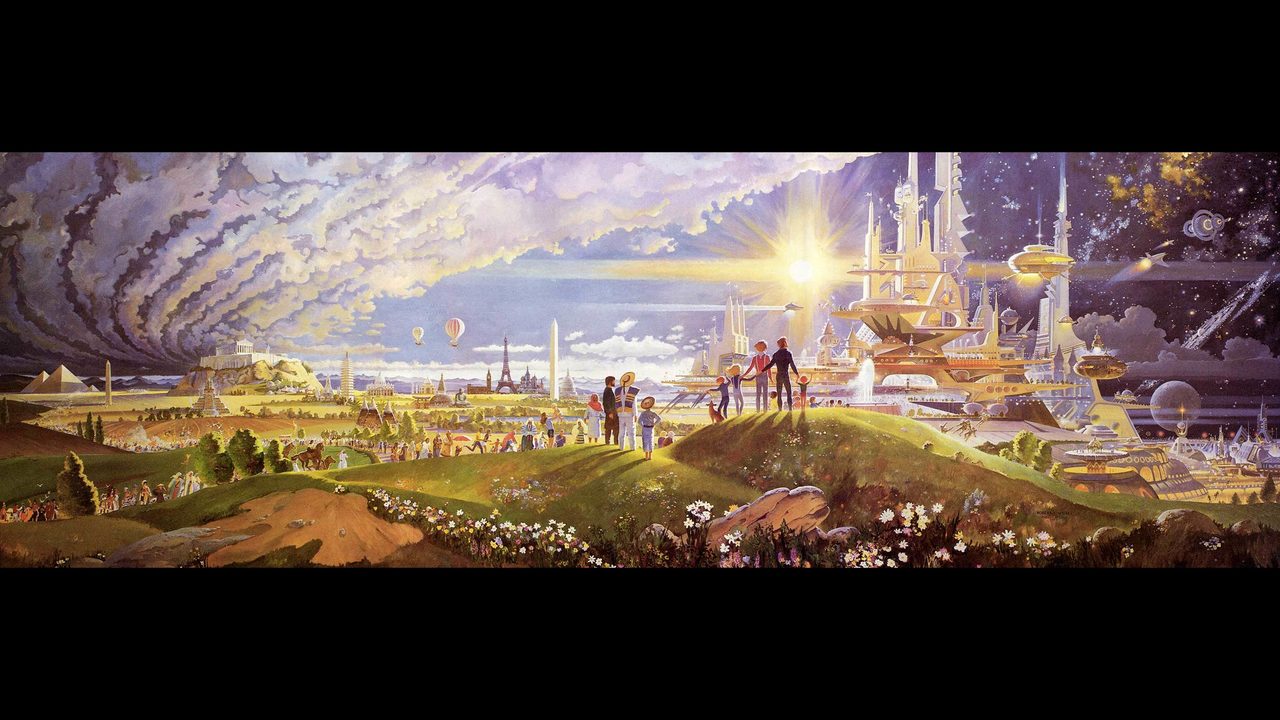 For many theme park aficionados, Horizons was the best dark ride ever created.

I am one of those people. It took the themes of all the other EPCOT Center attractions, added some humanity with an animatronic family, and portrayed what a realistic near future could be like. In design, it was something of a sequel to Carousel of Progress married to the ride system of Peter Pan's Flight.

It followed the Ep-pattern of starting first with visions from the past (Looking Back at Tomorrow) and then moving to the present (the astonishing Omnimax Theater segment of the ride), but while GM's World of Motion, for example, quickly painted the future as a hazy model with very few details, the future was the heart of Horizons. The finale  let you pick your own future, a first for any ride, that also showcased sponsor GE's cutting-edge technology. The original exit was meant to inspire: Guests traveled past an enormous painting by noted space artist Robert McCall called "The Prologue and the Promise." Well, for GE, the ride was far too subtle, so that magnificent mural was replaced by an even larger floating GE Logo with a light show. No one outside Disney knows if McCall's masterwork was saved.

The gem-shaped Horizons building itself was definitely, and publicly demolished after it closed for good in 1999. There is no truth to the rumor it was doomed by a sinkhole. It limped along for a few years of seasonal operation after GE didn't renew its sponsorship, was given a brief reprieve when GM's Test Track fell behind schedule and ultimately was torn down because Compaq (later HP) offered to pay for a new thrill ride: Mission: Space. 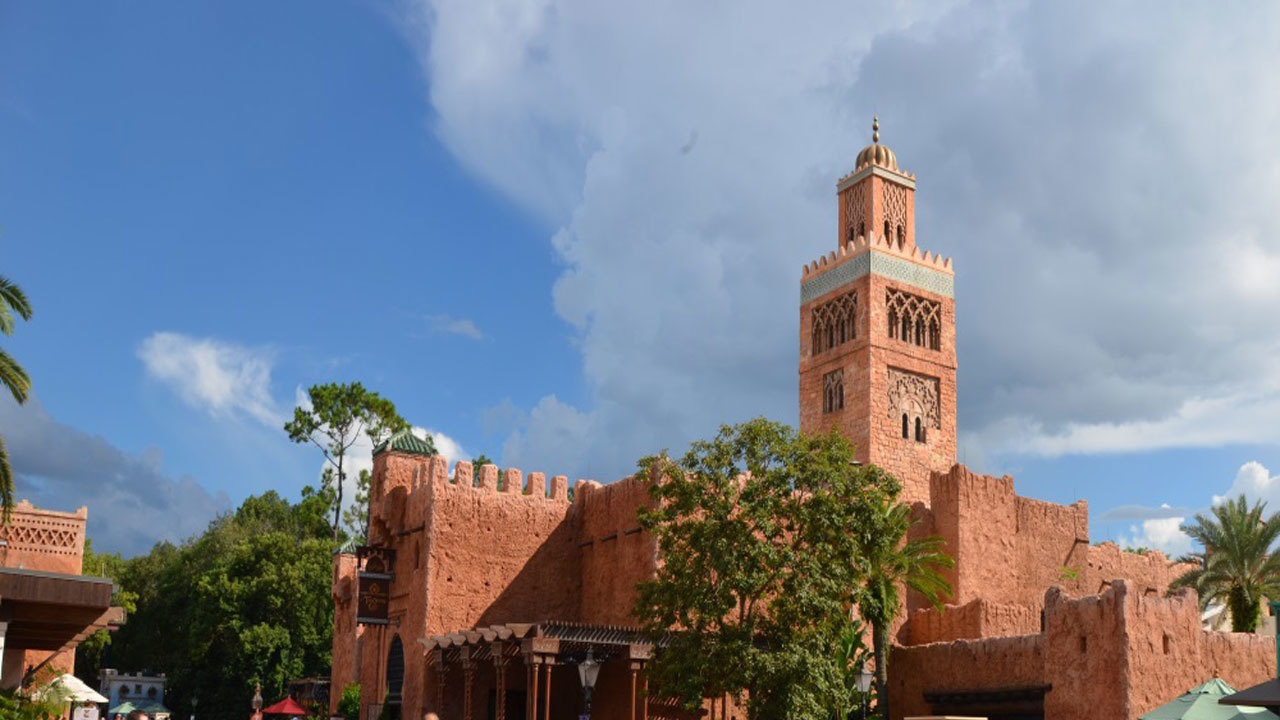 Despite popular belief, Morocco is the only country in World Showcase paid for, and still sponsored by its government.

King Hassan II wanted Americans and others to get a feel for his nation, so he opened up the royal wallet and -- more importantly -- sent over a small army of artisans to design and create all of the intricate tile mosaics and other carvings and ornamentation the old-fashioned way. It feels authentic because it is authentic.

The pavilion itself is a jewel with perhaps the best  sense of place out of all 11 nations. It also features authentic belly dancing in the underrated Restaurant Marrakesh in the back and the popular quick-service Tangierine Cafe. In the front, Tangierine features authentic shawarma, salads and hummus. It happens to be my go-to place for a fast bite in World Showcase.

A recent addition across the promenade, Spice Road Market is a thoroughly beautiful restaurant, with some of the most picturesque views of World Showcase Lagoon, but it appears to struggle attracting attention. My personal theory: The menu is too exotic-sounding for some and the price points are too high for nearly everyone else. 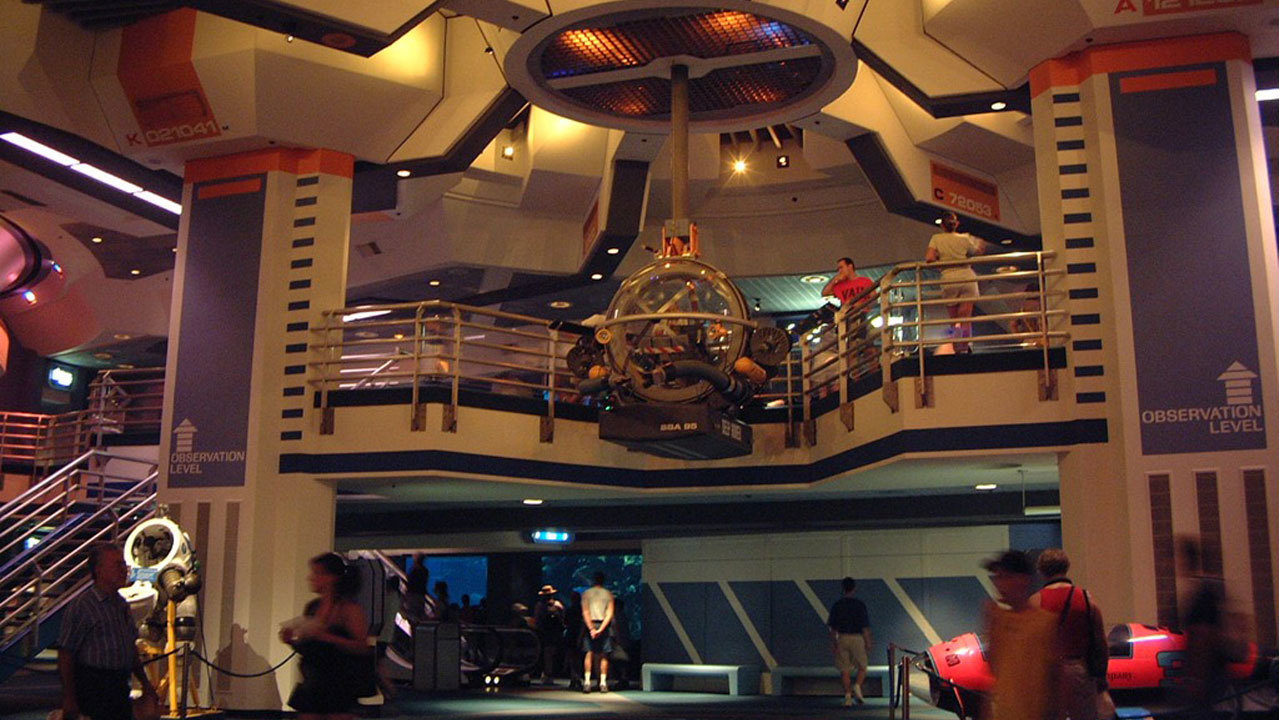 Billed as the sixth ocean in the world when it opened, many people walk past -- or even through -- The Living Seas without realizing what an enormous engineering feat it was to construct and still is to operate.

While ideas for a Seas pavilion featuring Poseidon and other myths date back to the 1970s, the pavilion was built  as a futuristic sea base. At its heart was the world's largest man-made aquarium from 1986 to 2005, when the Georgia Aquarium opened. Spaceship Earth (minus its legs) could fit inside the tank, which is 27 feet deep and holds 5.7 million gallons of water. "Turtle Talk" in 2003 and a "Nemo and Friends" makeover in 2006 breathed new life into the facility.  ​​​​​ 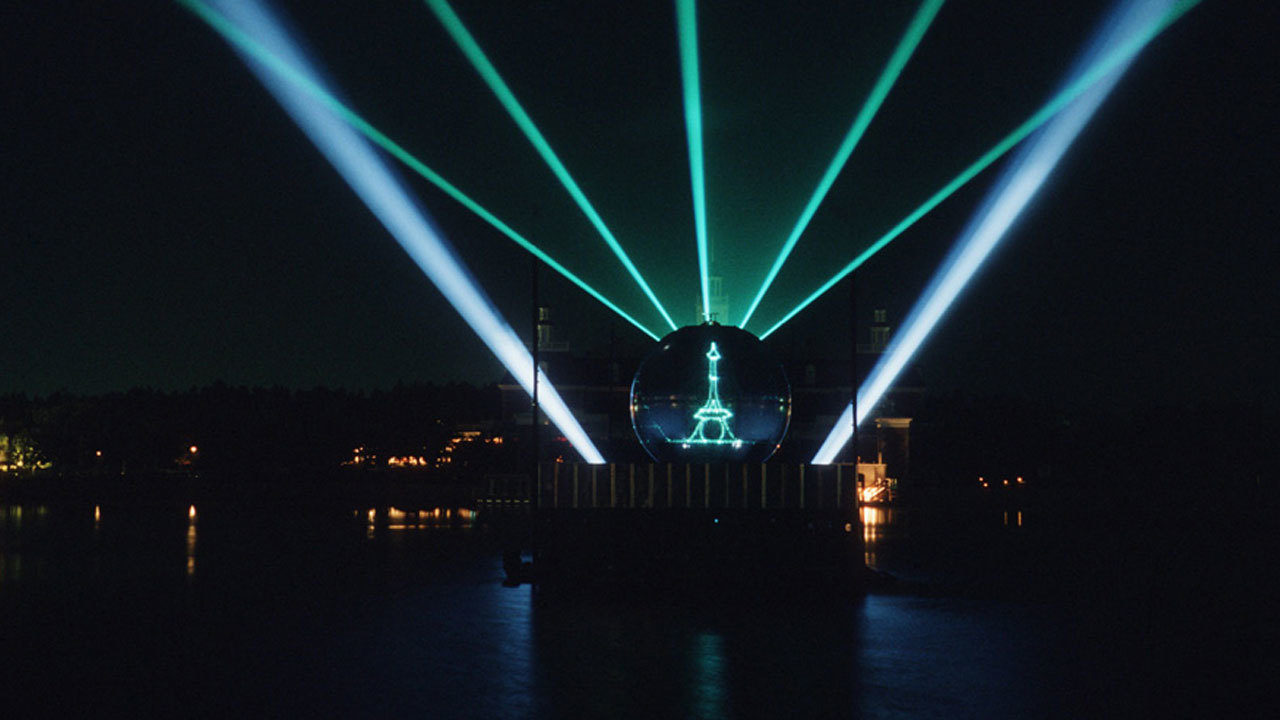 Today it is almost to impossible to imagine Disney without its nighttime spectaculars.

When EPCOT Center opened in 1982, there was only "Fireworks In the Sky" at the Magic Kingdom and it was only on select nights, mostly in summer and on holidays. While there were two earlier attempts at a nighttime show on World Showcase Lagoon ("Carnival de Lumiere" in 1982, and "New World Fantasy" in 1983), "Laserphonic Fantasy" was the first one that really dazzled and gelled, featuring fireworks, classical music highlighting each World Showcase nation, search lights, and the first laser animation.

Its successor, the first "IllumiNations" (1988) upped the ante and the wow factor by adding white lights outlining each "nation" along with special projections in spots (creating the Moulin Rouge windmill in France, for example). The traditions of that show evolved into the version most know today: "IllumiNations: Reflections of Earth."

By the way, there are no lights on Morocco because some of its buildings have religious significance. It is commonly stated that Norway doesn't have lights either to "balance" with Morocco, but I cannot verify that. 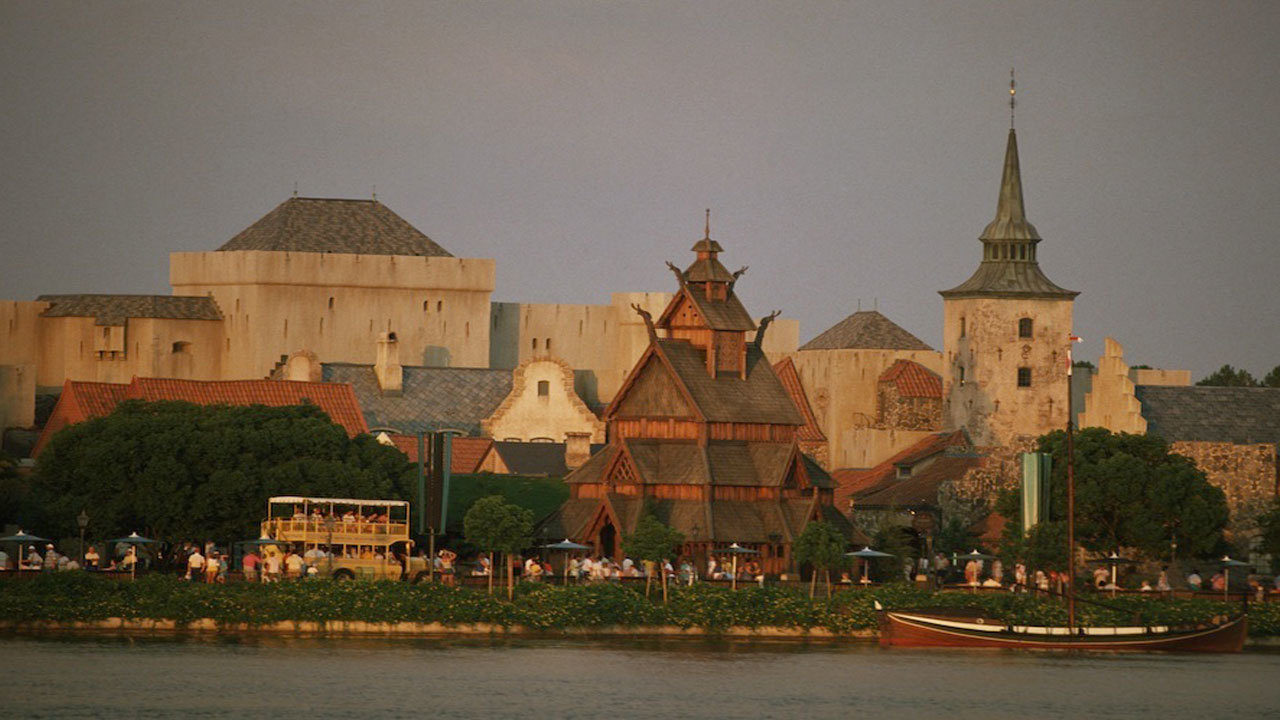 Norway is the latest nation to join the World Showcase lineup and included a welcome second ride.

While Maelstrom was not God's gift to imagineering, it included some innovations and a memorable encounter with a three-headed troll that sent you Back. Back. Over the Falls. Seeing the boats from outside the ride added kinetics. Shortly before it closed in 2014, I took a first-timer on the ride. After it ended with a splashdown by an oil rig, my friend asked: "That's supposed to make me want to visit Norway?" We both thoroughly enjoyed the film "Spirit of Norway" that played after the ride (you know, the movie most people rushed out to avoid sitting through).

Frozen Ever After took the place of Norway, utilizing the same viking boat ride vehicles and almost exactly the same ride layout. Frozen tells a much more coherent story, but one that has much less to do with Norway. The strawberry-topped rice cream sold in Norway has been one of my favorite theme park snacks since 1988. I used to love dining at its restaurant, but then Akershus was taken over by princesses. 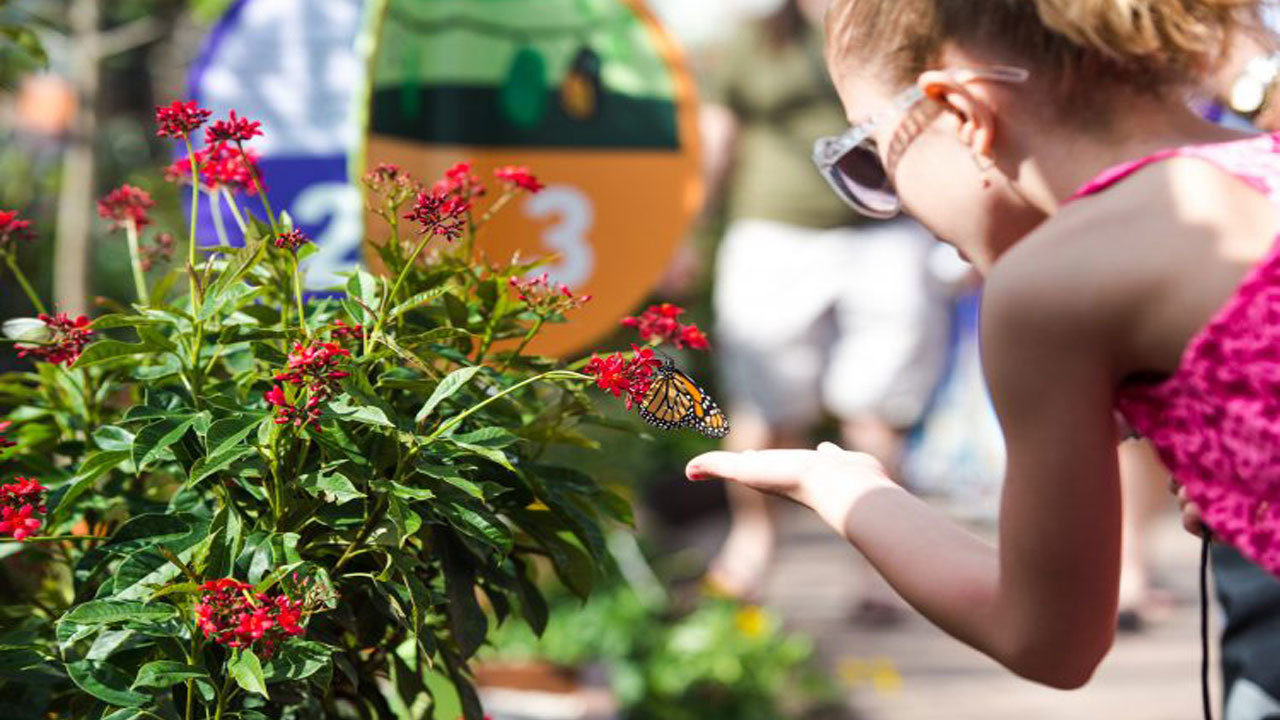 In 2018, there are vastly more days at Epcot with a festival than without one. Flower and Garden was the first, setting the template for all EpFests of lectures, topiaries, special landscaping and free concerts at the America Gardens Theater. Flower and Garden remains my favorite, even though it now feels more like a springtime Food and Wine Festival thanks to the addition of snack kiosks a few years back. It was created to fill a need and a theme park. Late spring was one of the slowest periods for crowds. Flower and Garden changed that. 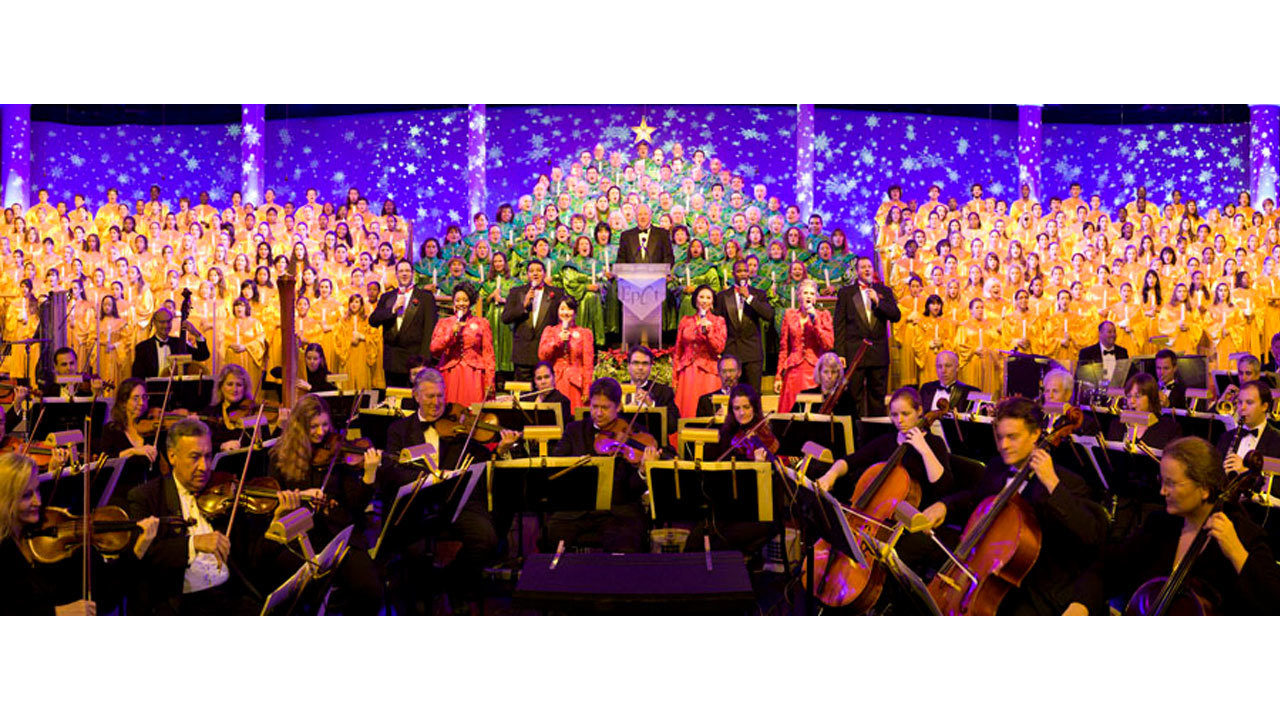 One of the few unabashedly religious pageants and shows in any Florida theme park, Candlelight, features living Christmas tree choirs and celebrities telling of the Nativity story through Christmas carols, scriptures and hymns.

The Candlelight tradition actually dates all the way back to Disneyland in 1958, and a version debuted with the Magic Kingdom's 1971 holiday season. For much of its early Florida run it was only held a few nights a year. Moving it to Epcot in 1994 made it the appropriate centerpiece of Epcot's "Holidays Around the World." At Epcot it grew in size, scale and in number of performances. I try to see it at least once a year. For a unique and rewarding perspective, watch the American Sign Language interpreters instead of the narrators. 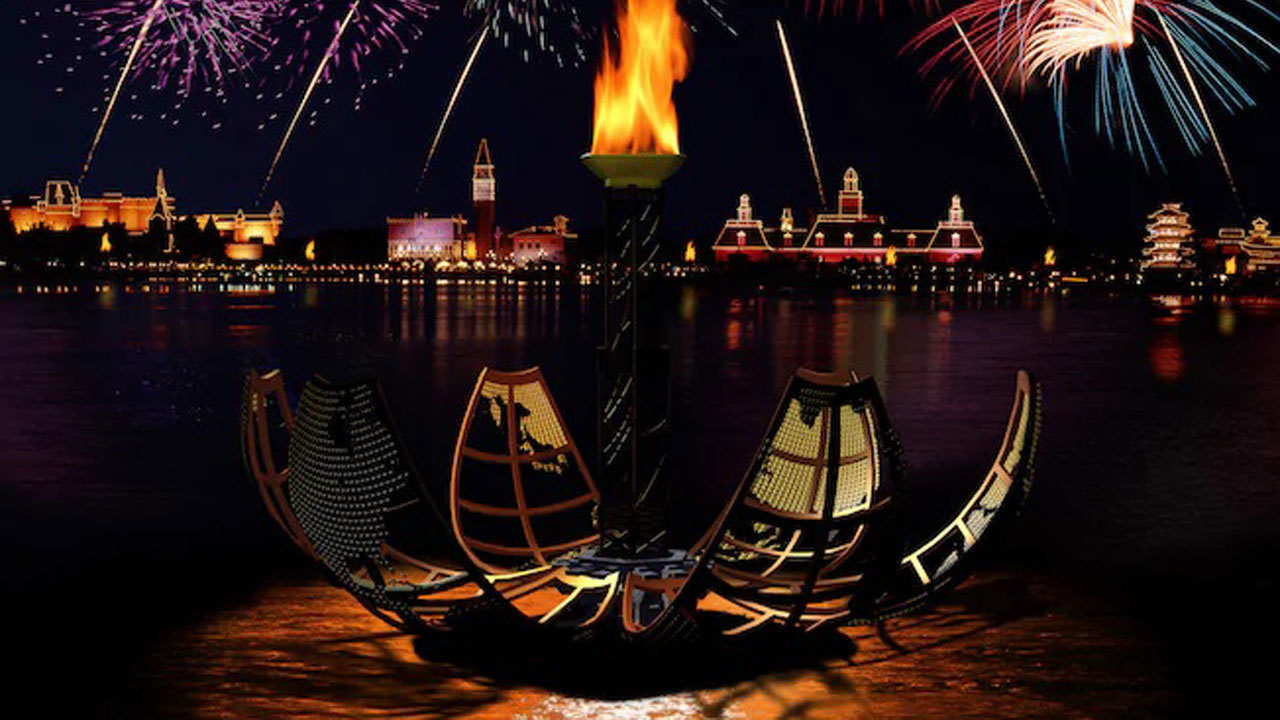 The change of the millennium was a worldwide event, so it was appropriate to make Epcot the center of Walt Disney World's celebration.

The nearly two-year party has had lasting impacts on the park. It gave us the widely praised, beautifully orchestrated "IllumiNations: Reflections of Earth," but it also gave us the "Leave a Legacy" entrance monoliths. Many people call them tombstones or "the graveyard." Until 2005, it also gave us the truly hideous Mickey hand and wand looming over Spaceship Earth.

I do still miss two key elements, though: The Tapestry of Nations parade with its unique soundtrack and oversized puppets, and the Millennium Village.  It featured a range of temporary, smaller exhibits and "attractions" allowing a range of nations to temporarily join the permanent 11.

Two of the newest additions to Future World are also the biggest draws with the longest waits.

Soarin' landed in 2005 at "The Land" -- cloned from Disney's California Adventure, where the flight over California was one of that park's very few hits. The hang-gliding flight over an IMAX-sized screen with smells seems pretty simple, a natural successor to things like CircleVision 360 or Impressions de France. It is actually an engineering feat. Bless Disney for adding a third theater to cut what were absolutely outrageous wait times. The original Soarin' film (landing at Disneyland) was replaced with Soarin' Around the World in 2016. While we finally land our flight at Epcot, and the global sites are more appropriate here, I think the original film was more coherently structured and edited.

As for Test Track, it's been a hit since it first  debuted nearly two years late in 1998. I miss the snark of the original ("surprise tests?"), and for some reason eliminating the German and Belgian blocks makes the start of version 2.0 less fun. But what 2.0 gets right is the feel of old Epcot. Some call the aesthetic Tron Track. Yes, the design-your-own SimCar thing should have more explanation and be more integral to the ride, but that ride is still a lot of fun, with a post-show area full of exhibits for those wanting to learn more.