Taking the hassle out of homework

Experts suggests a 'window of opportunity'

Homework is supposed to be an opportunity to practice the skills that students are learning in school, but for many families, it's a major source of conflict and frustration.

As a result, homework assignments that should take minutes can drag on for hours filled with nagging, stalling or yelling.

We talked to Dr. Blake Lancaster, a clinical psychologist at C.S. Mott Children's Hospital, about ways to reduce the homework drama.

Lancaster says if you want to end the homework battle, you need to get inside your child's head.

"I'm always trying to think, 'Why is what they're doing looking good for them?'" Lancaster said. "This conflict that oftentimes develops around homework is, you know, pretty strategic from a child's perspective."

Lancaster says a major reason kids drag out doing their homework is the desire for their parents' attention.

"They'll get a lot of interaction from the parent in that prompting, cajoling, trying to get them into it, so they might be getting higher levels of one-on-one interactivity, even if it's negative interactivity.

They want nothing more in this world than to engage with their parents one-on-one and so they'll take negative attention over no attention," Lancaster said.

From a child's perspective, creating drama can also make boring assignments more interesting.   And there's another benefit to consider.

"Some kids find that if they drag this out long enough that the parents will basically do the homework for them," Lancaster said.

Parents can unintentionally make matters worse by trying to bargain or reason with their children.

"All those things that you say, those kinda can backfire, and it's much more about what you do and if you do it in a way that catches their attention," Lancaster said.

For elementary school-age children, Lancaster recommends a technique called the "Window of Opportunity."

Read more about the "Window of Opportunity" below.

Start by setting a timer for a slightly longer period of time than you expect the homework to take. Then offer the deal.

"If you get your homework done during this period, we'll use the rest of the timer time to do something special, a special thing that is only available during this 'Window of Opportunity,'" Lancaster said.

The reward should be something you do together that the child enjoys, such as playing a favorite board game. Go ahead and set the game up where the child can see it as motivation.

"I think it's critical that a component of the 'Window of Opportunity' is you're going to get my, as a parent, undivided attention after this and we'll do whatever you want to do," Lancaster said.

Start the timer and stay nearby, but not at the table.

"Try to not sit down with them to do the homework. If they ask a question, I'll respond to specific questions. I'll come over and help them, but then I'll remove myself," Lancaster said. "I don't sit there the entire time."

The faster the work is done, to your standards, of course, the more time the child gets for the activity.

If your child tries to wander off during the allotted time, guide them back to the table.

"You've got to kind of redirect them without a lot of interaction," Lancaster said.

"As soon as they're done, spend the rest of the time doing, you know, whatever activity," Lancaster said.

If the child doesn't finish the work within the time allotted, they're not off the hook.

"They should still have to be seated and finish the homework before they can leave the kitchen table, but the window of opportunity has expired," Lancaster said.

Here's the hard part -- that means no reward activity.

"You might get a lot of crying, a lot of negotiating, and I've been through that," Lancaster said.

But he urges parents to stay strong and follow through.

"If you can follow through just one time on a consequence, it can really have an impact," Lancaster said. "The threat of a consequence will almost never have any impact. They have to live it."

For older kids, Lancaster said, it's important to treat homework as part of their job. If they do their job, they can earn privileges.

"They think that their phone is their right. They think that the car is their right. These are more privileges, really," Lancaster said. "If you're not doing your job, we need to recalibrate that this is actually related. And sometimes you have to break it down and show them that, 'OK, these are the expectations.' And be very clear, 'If you meet this and this, you will get that.'"

Lancaster said it's essential for middle and high school students to keep a planner with all of their assignments written inside.

"The first thing we almost always go to is a daily planner, especially if it's an academic issue," Lancaster said. "You have to bring it home and show me you filled it out for your class and then you can earn Wi-Fi access or your phone. Then you can up the levels of difficulties, so to speak. From there, then you can say, 'Not only do you have to show me, but you have to show me the completed work.'"

Lancaster said it's also important for parents to understand that learning how to manage all of the requirements is a challenge in and of itself.

"There's a skill that you're teaching them," Lancaster said. "Sometimes we just expect them to pick it up and run with it, and sometimes it's not that they won't do it, it's that they can't. They don't know and so break it down, and show them what you need done."

Eventually the rewards won't be necessary.

"As time goes on, you hopefully develop a habit and that's what should carry them out into the real world," Lancaster said.

Read more about the "Window of Opportunity" by clicking on the image below. 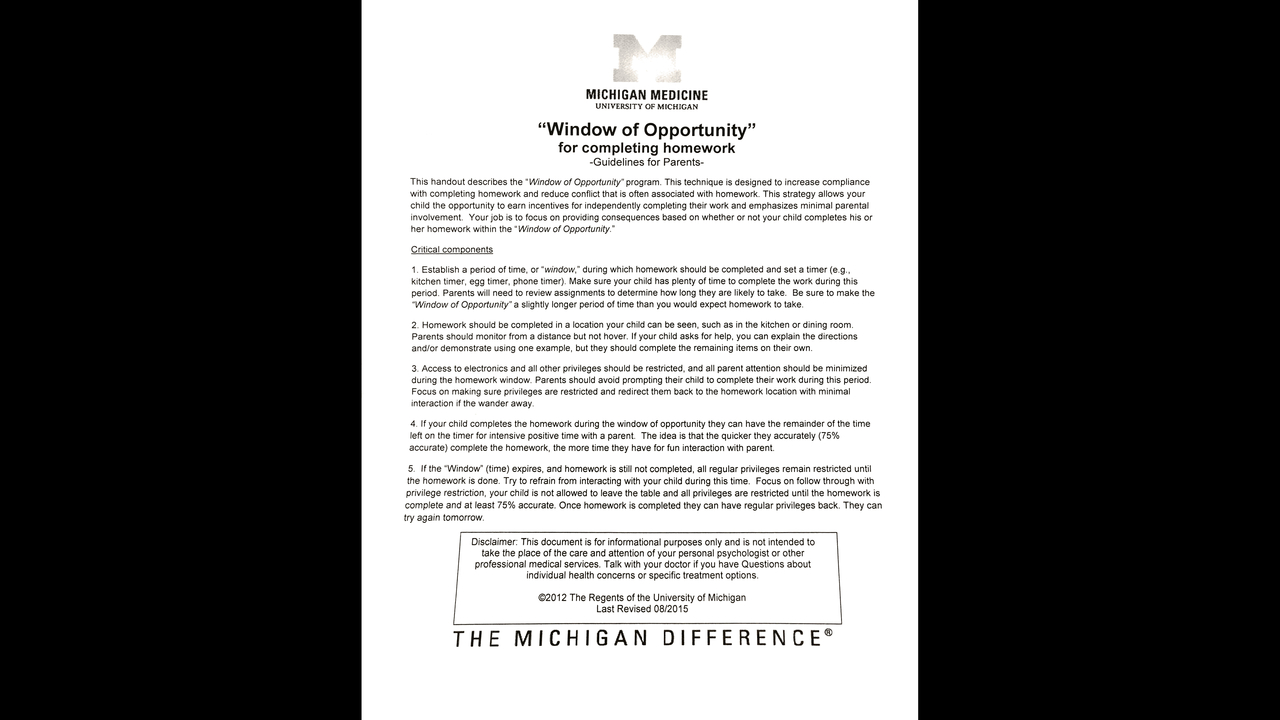