A rip current statement in effect for Coastal Flagler Region

A rip current statement in effect for Coastal Flagler Region

Be the first on your block with a Paolo Banchero Orlando Magic jersey!

ORLANDO, Fla. – Earlier this year, 11-year-old Alondra Centeno, who has autism, was taken out of school and forced to undergo a mental health evaluation.

Because it was done under Florida's Baker Act, it was done without her or her parent's consent.

[RELATED: What is the Florida Baker Act law?] 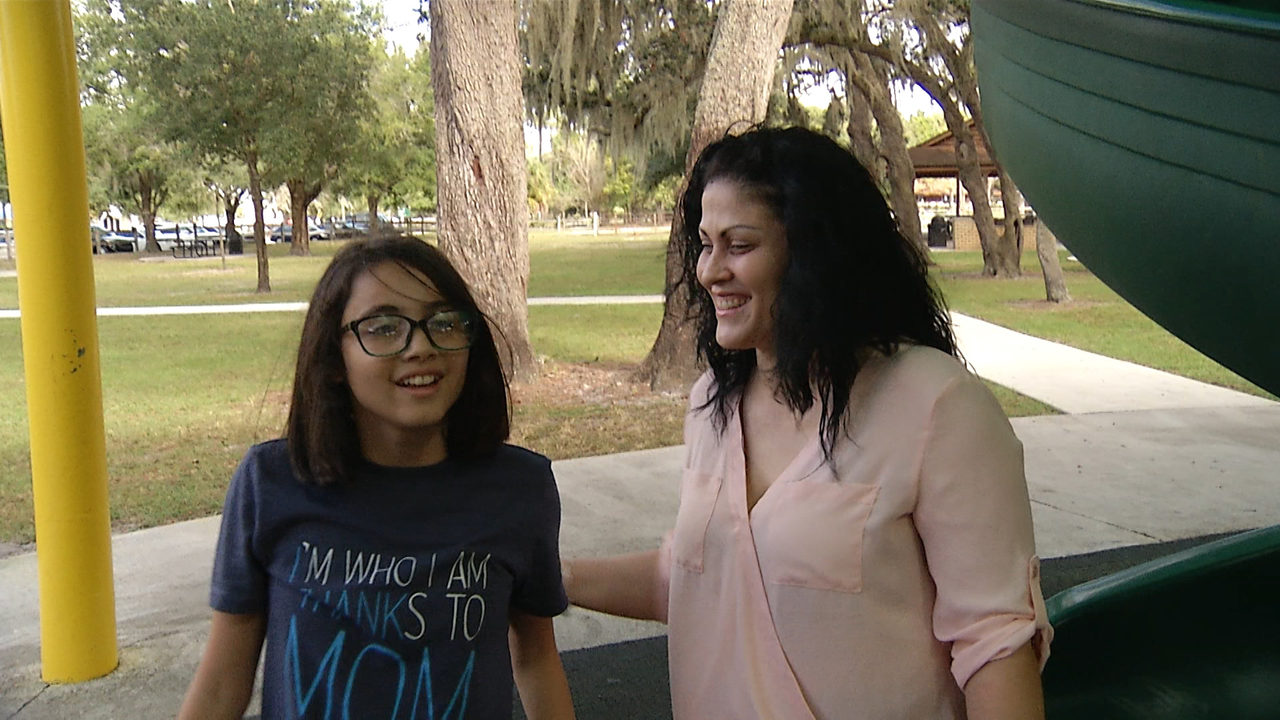 "Being separated from my mom really scared me," Centeno said. "I had two nights where I just cried myself to sleep."

The incident happened a week after the Parkland shooting. Centeno said she told a substitute teacher at her elementary school that she had suicidal thoughts, but Castro said that by the time she got the call from the school, her daughter was already being taken away by law enforcement.

Centeno said the process of being taken away was terrifying.

"The sheriff (deputy) took me into the back of the car, where usually criminals sit," Centeno said. "I was just looking out the window, scared, wanting mom."

Centeno was taken to the University Behavior Center in Orlando, where she was held for three days.

Centeno said she was scared, alone and confused as to why she was there.

So was her mom, especially since both said Centeno did not make a big scene in class or do anything to hurt herself or others.

Officials with the Orange County Public School District, the fourth largest public school district in Florida, confirm they have seen an increase in it being used in the classroom and say new state-mandated guidelines under the Marjory Stoneman Douglas Public Safety Act are part of the reason why.

"All of our schools now have a mental health designee on campus who's been trained on how to react to students who do present a threat or state they may harm themselves," said Mary Bridges, the senior director of student services at Orange County Public Schools. "And we're training administrators and those mental health designees to work with law enforcement to make sure our students are safe."

Bridges has been with the school district for 25 years -- first as a teacher and now as an administrator. She oversees the psychologists and social workers who work with students every day. She said they updated their threat response procedures in the beginning of the year.

"What we are seeing is an increase in students who really are having anxiety and stress more than we've seen in the past," Bridges said. "We're working hard in our elementary schools to help with resiliency and coping skills. You don't want to take anything for granted. You want to make sure all your students are safe."

Bridges agrees parents need to have an active role in the process but said they can't always be reached.

"In our procedures, we are always trying to get a hold of the parent as soon as we possibly can," Bridges said. "Our concern is to make sure the student stays safe, and we do whatever it takes to make sure they are not able to harm themselves until they can get the resources they need."

Bridges said the Baker Act is only used when kids are in crisis, not as a disciplinary tool, and that law enforcement has the final say on commitments done on schools grounds.

"And there are times when we may be called in and we determine that the child does not meet the criteria," Demps said. "So we're not there to take the child out of the class if they are being disruptive or the teacher just needs a break from them. That's not meeting the criteria for Baker Act. That's not what we do."

Demps said because of Parkland and the new Public Safety Act, more attention is being placed on early intervention. She said with all the things kids see on air and online, they are facing more stressors than ever before, which can and do affect their mental health. She agrees communication with parents is key.

"Sometimes, kids are Baker Acted on the autism spectrum, and it may be that they are depressed or have a mental health crisis at that time, so that's a fine line to work with," Demps said. "The parents have to be involved."

Last year, a state task force -- consisting of law enforcement, mental health professionals, school administrators, public defenders, parents of children who have undergone involuntary examinations and others -- met five times to discuss what was causing the increase and what could be done to stem the tide. Last November, they released their report stating, in part, that further data was needed and access to prevention and early intervention services is critical to reducing the number of minors having a Baker Act initiated.

Demps was part of that task force.

"At the end of the day, I don't think we are overusing it at all," Demps said. "It is making sure we are erring on the side of caution and that everyone stays safe."

But Diane Stein, who heads the Citizens Commission on Human Rights, said both law enforcement and school personnel need more training and reporting requirements need to be improved.

Stein said the Baker Act is a very specific law that requires the following criteria be met:

Stein says they have received calls to their hotline that claim not all three criteria are being met in all the cases involving students at schools.

"A lot of officers and deputies are under the mistaken impression that the only thing they need to worry about is whether the person is a danger to self or others. That's incorrect," Stein said. "It is just too easy to Baker Act."

So what does Stein think could help? Parent involvement.

"The simple solution is bring the parents in," Stein said. "The majority of parents are good people; they want to help their kids. They want to do what is right for their child. So if there is a perceived problem, whether it is mental illness or perceived mental illness or some other problem, bring the parents in. Have the conversation with the parents. That education point alone would go a long way to reducing the number of Baker Acts of children in the state."

Kendra Parris is an Orlando attorney who said she's heard from dozens of families who feel the same way.

"I personally think while there are children who are helped by getting a Baker Act, far more are harmed in the long run," Parris said. "It creates distrust in the child and in the parents because if they do feel they want to reach out and get help in the future, they're concerned another Baker Act is going to happen."

"Individuals at schools, whether it is the teachers or support staff, are fearful that if they don't act, then if something happens in the future, they're going to be held responsible," Parris said.

Castro said the school overreacted when they used the Baker Act on her autistic daughter, and she believes they should have involved her in the process from the beginning.

Though she has kept Centeno at the same school, she said the experience did more harm than good, as she is still trying to get over the trauma it caused her daughter and family.

Castro said while she feels there are kids that need this kind of mental health help, she feels there needs to be more training on both the school and law enforcement's sides, especially when it comes to handling kids on the autism spectrum.

News 6 reached out to all 10 Central Florida school districts regarding the number of Baker Acts invoked on school grounds. Officials from the following districts responded with the statements below:

"In 2017-18, there were 438 students Baker Acted. This year, from August to September, we have reports of 71 students Baker Acted. It's important to note that prior to the Marjory Stoneman Douglas High School Public Safety Act (SB 7026), much of the district's reporting was related to threats of suicide. Now, our reports encompass all large-scale threats (i.e., threats to harm self or others), which is why you notice an increase. It would be misleading to compare data from previous years, as the collection method has changed.
SB 7026 requires that every school have a threat assessment team. Teams are made up of a school-based administrator, a mental health designee, and instructional staff member and law enforcement. They meet to determine what additional follow up is needed for students who have made threats to harm themselves or others, including those students making threats of violence. Also, administrators do not determine whether a student should or should not be Baker Acted. This determination is made by law enforcement."

"During the 2017-18 school year, 156 students were transported for mental health evaluation under the Baker Act criteria, as compared to 176 students the previous year.
This represents an 11.4 percent decrease."

"Marion County Public Schools has seen an increase in the number of cases where students are ordered into mental health services; however, school districts do not have legal authority to make such orders. That authority belongs solely to law enforcement."

*News 6 checked with the Marion County Sheriff’s Office. Their records show in the 2017-18 school year, there were 741 Baker Acts involving students initiated by their deputies. So far, in the 2018-19 school year, there have been 278 Baker Acts involving students initiated.
According to MCSO, these results reflect the population of children ages 4-17 who were taken into custody under the Baker Act during the 2017-18 and 2018-19 school year. This applies to children who are in public school or are home-schooled.
News 6 also checked with The Centers, a mental health facility in Marion County, which reported that 1,078 children were admitted under the Baker Act from July 1, 2016 to June 30, 2017. The number of juveniles admitted the following year increased to 1,375, according to The Centers. Those figures represent the total number of children admitted, not just students.