1 teen arrested, 2 on the run after opening fire on Orlando police, chief says

A river flood warning in effect for Lake and Volusia Counties

McDonald’s changing up its prizes in Happy Meals. Here’s how

1 teen arrested, 2 on the run after opening fire on Orlando police, chief says

Learn the core tenets of project management in just 1 hour

Resident fears children could have been harmed

ORANGE COUNTY, Fla. – A large alligator that was hissing and bucking near a school bus stop in Apopka was removed by wildlife officials on Wednesday.

"If I saw it by myself I would be terrified, let alone the kids coming from the bus," Smith said.

At around 3:45 p.m. when Smith's son got off the bus, Apopka Police Department officers were at the gate. They had arrived a few minutes before the bus did.

Smith said she fears what could have happened if the police had not been there.

"Just terrifying. They could just walk off the bus and there's a gator waiting for them at the bus stop. That's just crazy," Smith said.

Gregory Griffith said he saw police outside the entrance to his neighborhood when he came home.

"As I got closer I said, 'Oh my God, look at the size of this alligator. It's huge,'" Griffith said.

Griffith said he thinks the gator came from the lake behind his home and walked past a playground area where his wife takes their 2-year-old grandson to play.

"Who knows? She might have been walking him or whatever, playing in the park," he said.

Officers tried to keep people away as they attempted to maneuver the alligator under the gate and back into the lake to no avail. They were required to call a Florida Fish and Wildlife Conservation Commission trapper. 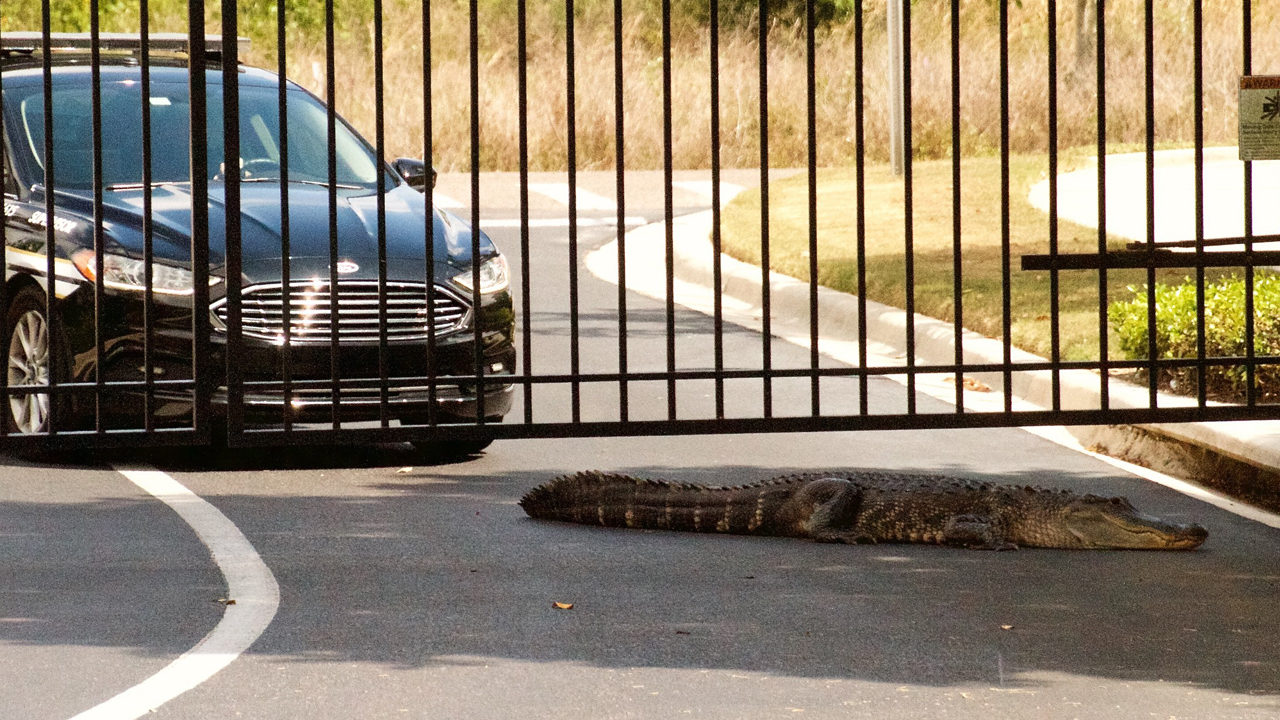 There are two sidewalk gates to get into the neighborhood. The gate where the alligator was located is permanently locked. Residents must enter and exit through the other one.

The FWC contracted nuisance alligator trapper removed the alligator and safely euthanized it.

Smith said she is glad no one was hurt. She adds she's now talking to her children about alligator safety.

"They thought it was all fun and games, but I definitely told them that it's scary and they shouldn't be anywhere near gators and if they see them to run the other way," Smith said.

Alligators become more visible and active during this time of year as temperatures rise and their metabolism increases, according to FWC officials. Alligators begin to seek prey items and mating partners in May or June. During spring, greater visibility of alligators is primarily attributed to warmer temperatures.

If you are ever concerned about an alligator, call FWC's toll-free Nuisance Alligator Hotline at 866-392-4286.