A tropical depression is forecast to strengthen into a hurricane on a path toward Florida.

Here’s what it means to be in the forecast cone

Low rain chances continue for the weekend in Central Florida

Only rivalries with at least 90 games played were considered

What makes for a great college football rivalry? Three main ingredients can be found consistently across some of the greatest competitions: First, it helps when the rival is geographically close. When schools are within the same state or a neighboring state, fans of both schools live close enough to feed a  long-lasting competition yearlong—plus they can drive to the game every season. Second, the teams need to be closely matched as competitors; no one wants to watch a game when the outcome is always a foregone conclusion. Third, a rivalry needs plenty of lore and storied history—the longer, the better.

[TRENDING: Crowds expected to double for next Artemis I launch attempt | ‘We don’t know what to do or where to turn:’ DeLand trailer park hikes rent 52% | Enter to win Halloween Horror Nights tickets | Become a News 6 Insider (it’s free!)]

The 15 football rivalries featured here check all of those boxes and more. To celebrate school spirit, Best Universities compiled a list of the most evenly matched, long-running college football rivalries in the U.S., using data from Stathead. Rivalries were ranked based on how closely each team’s total wins compare in a given rivalry. Only rivalries with at least 90 games played were considered. Additionally, due to limitations of the dataset, only games where at least one team was counted as a “major school” (equivalent to the current Division I Football Bowl Subdivision) were included, so records may not match all-time totals calculated elsewhere.

Most of these 15 rivalries date back not one but two centuries ago—to the 1890s. Fans buy tickets and mark their calendars months ahead and regard the “big game” between their alma mater and its archrival as one of the highlights of the season every year. 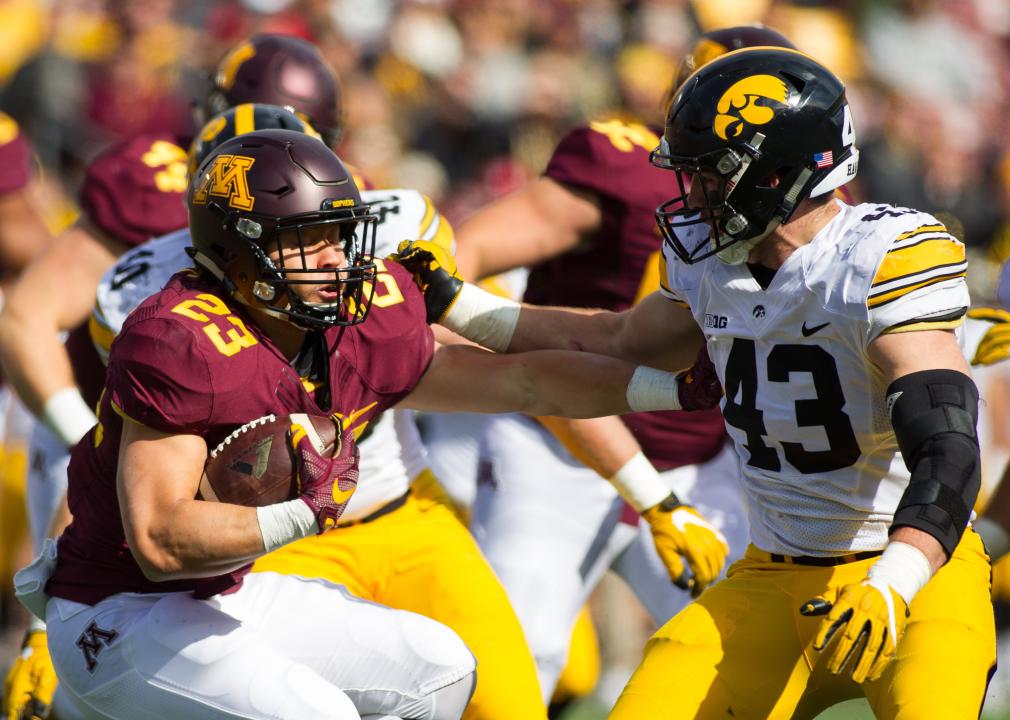 This rivalry really heated up in 1935 when the Minnesota and Iowa governors waged a bet on the game with a prize hog on the line. Minnesota won the hog, but beginning in 1936 a bronze hog trophy (called "Floyd of Rosedale") has gone to the winner every year since. At the height of the rivalry in 1960, both teams were undefeated when they met with the Big 10 Championship and a Rose Bowl berth at stake. Minnesota won that one too, but Iowa still boasts a decisive edge in the series' long history. 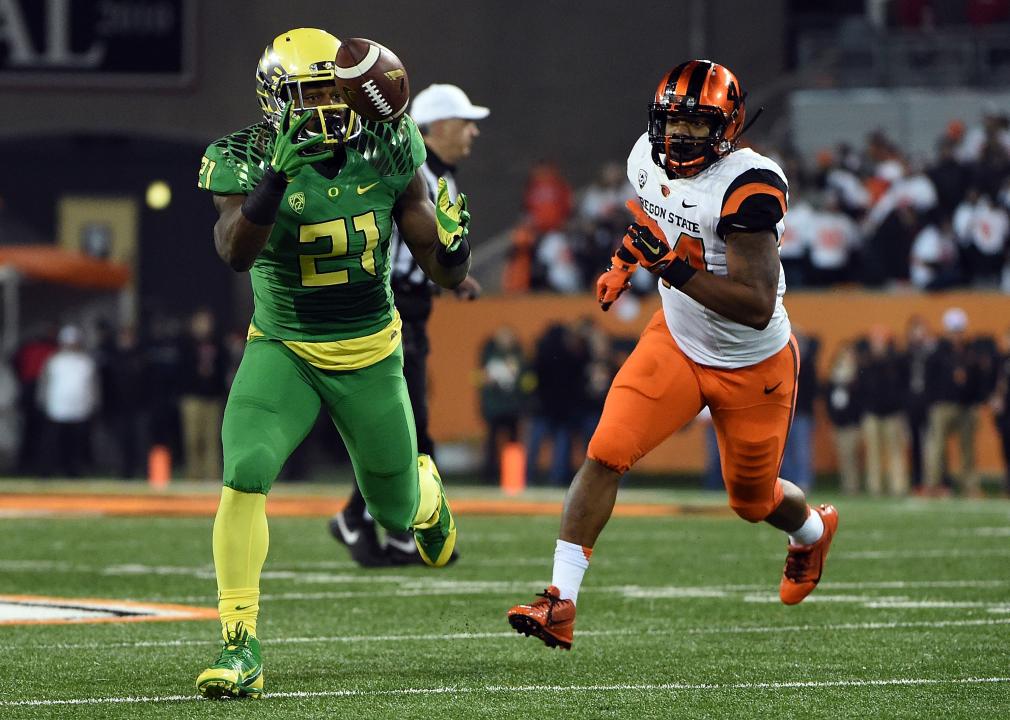 This natural rivalry between Oregon's two biggest schools, located only 50 miles apart, was called "The Civil War" for decades before the term was officially scrapped in 2020 due to its perceived associations with slavery. The financial support of Nike, whose co-founder Phil Knight was a University of Oregon track star, has favored the Ducks in recent decades, as they've won 12 of the last 15 showdowns. Despite the Ducks' dominance and the removal of the game's nickname, however, the Thanksgiving weekend classic is still a season highlight for both teams. 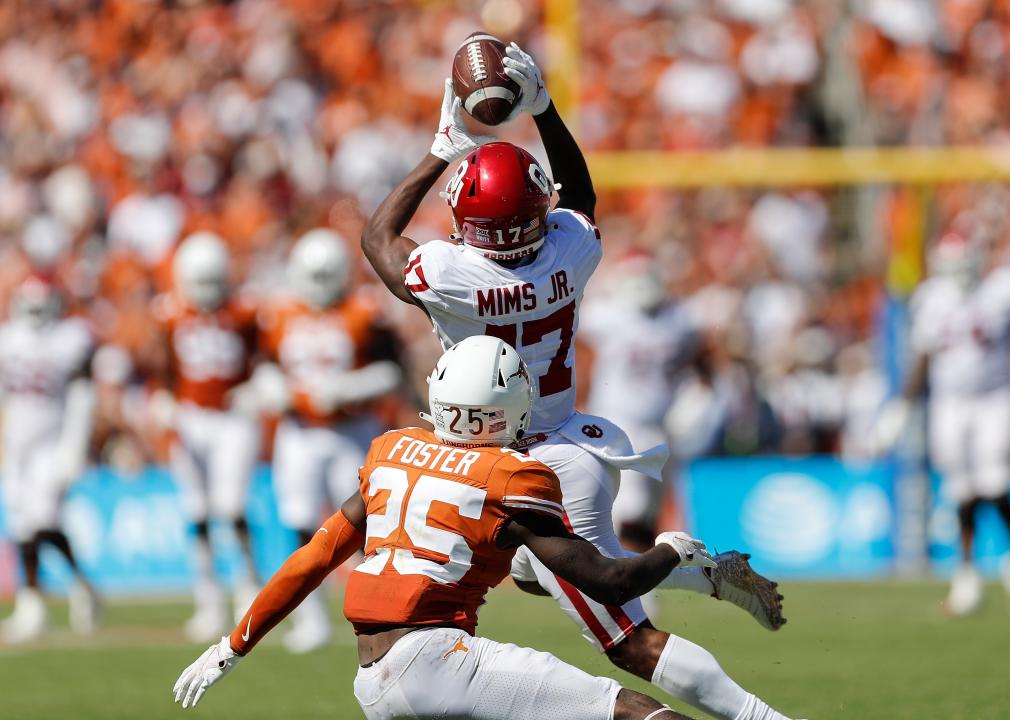 Texans outnumber Oklahomans by a ratio of nearly 8-to-1 and outnumber their neighboring state in major professional teams by 8-to-none. But residents of the Sooner State have the edge in one department: The Oklahoma Sooners have beaten the Texas Longhorns more often at Dallas' Cotton Bowl, where the game is played. The "Showdown" will continue even after the two teams' impending switch from the Big 12 to the SEC. 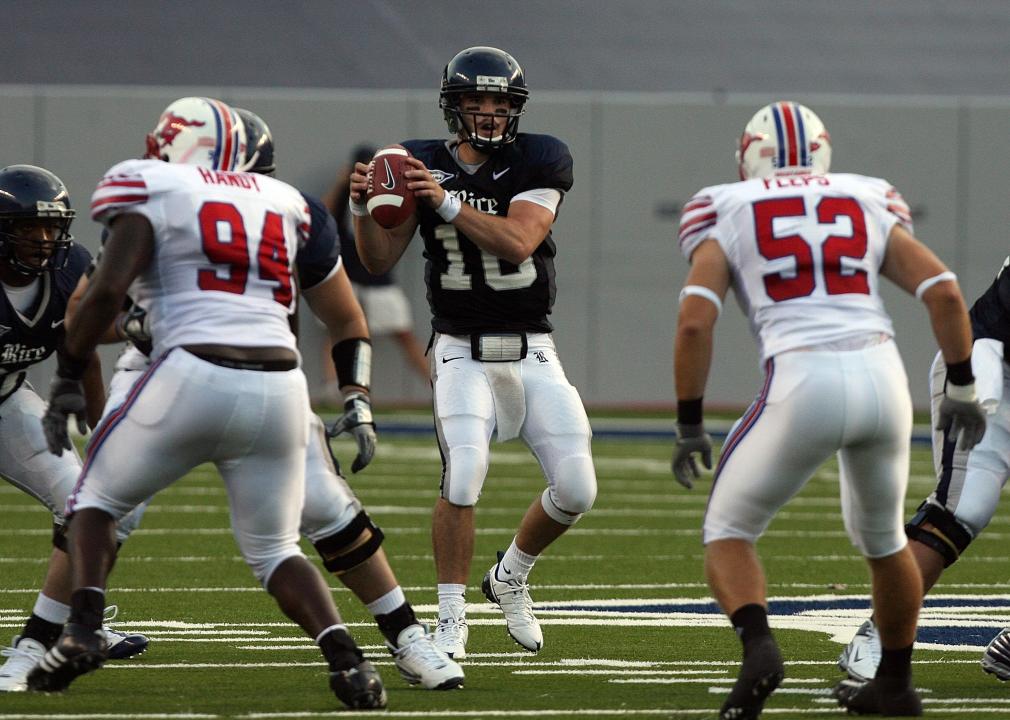 This was always a big game because Rice University and Southern Methodist University are the two leading private universities in Texas, and they're in the state's two biggest cities. But Rice (Houston) and SMU (Dallas) haven't met since 2012 because SMU moved to a different conference. Although SMU won more games, Rice won the last one in 2012 (36-14) as well as the first (an unbelievable 127-3 blowout). 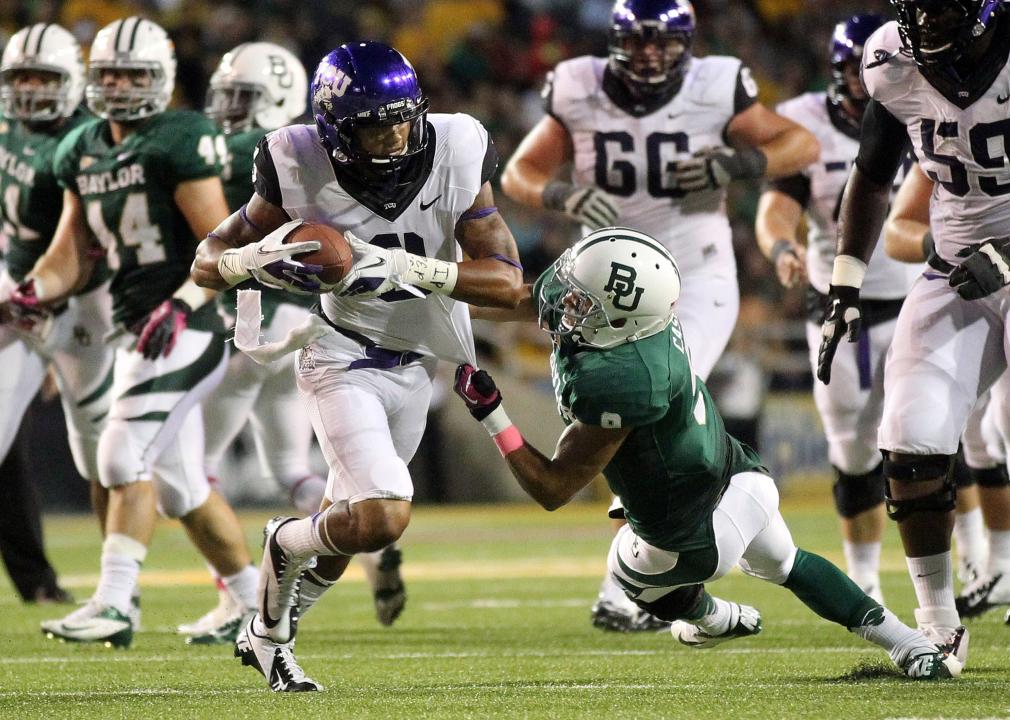 Texas is so big that 90 miles is just a hop down the road, a distance fans of Fort Worth's Texas Christian Horned Frogs and Waco's Baylor Bears drive every year for their annual showdown. Baylor won or tied the first 10 straight games, but TCU has been the dominant team in recent years, winning six of the last seven games. The lowest-scoring game was their very first one in 1899, a 0-0 tie. The highest-scoring game was a 61-58 thriller that Baylor won at home in 2014. 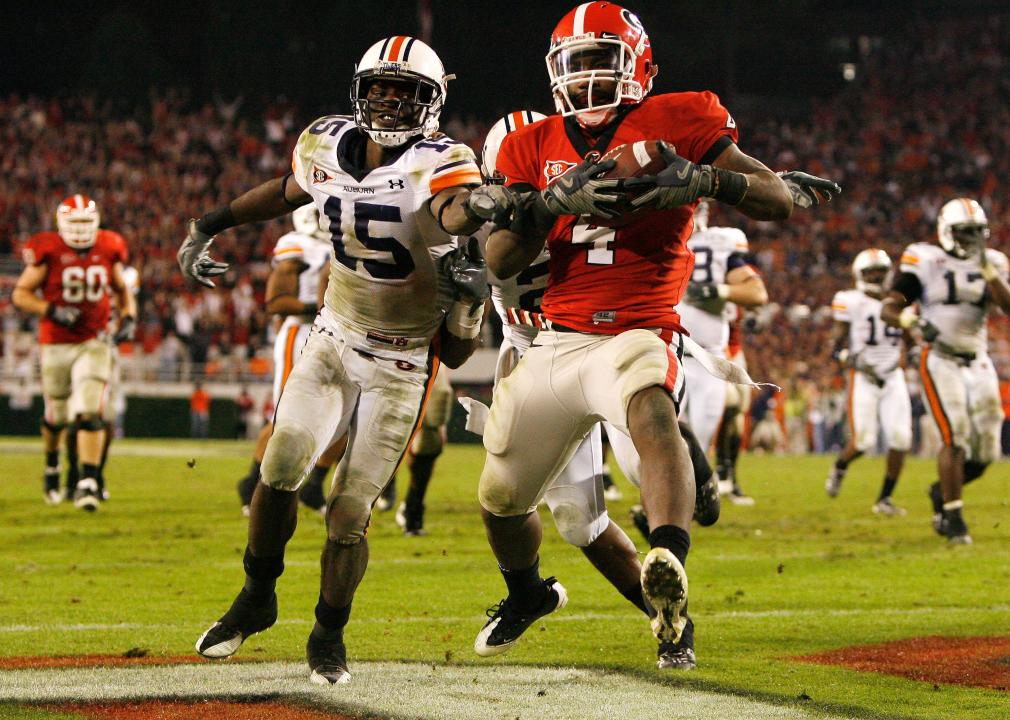 Southerners love their football—high school, pro, and especially college—so this annual matchup is treasured. Although the Georgia Bulldogs have won 13 of the last 17, there have been some nail-biters—none as stirring as the 56-49 Georgia win in 1996, marking the 100th meeting of the two teams and the first overtime game in SEC history, a game that actually required four overtime periods before the Southern dust settled. 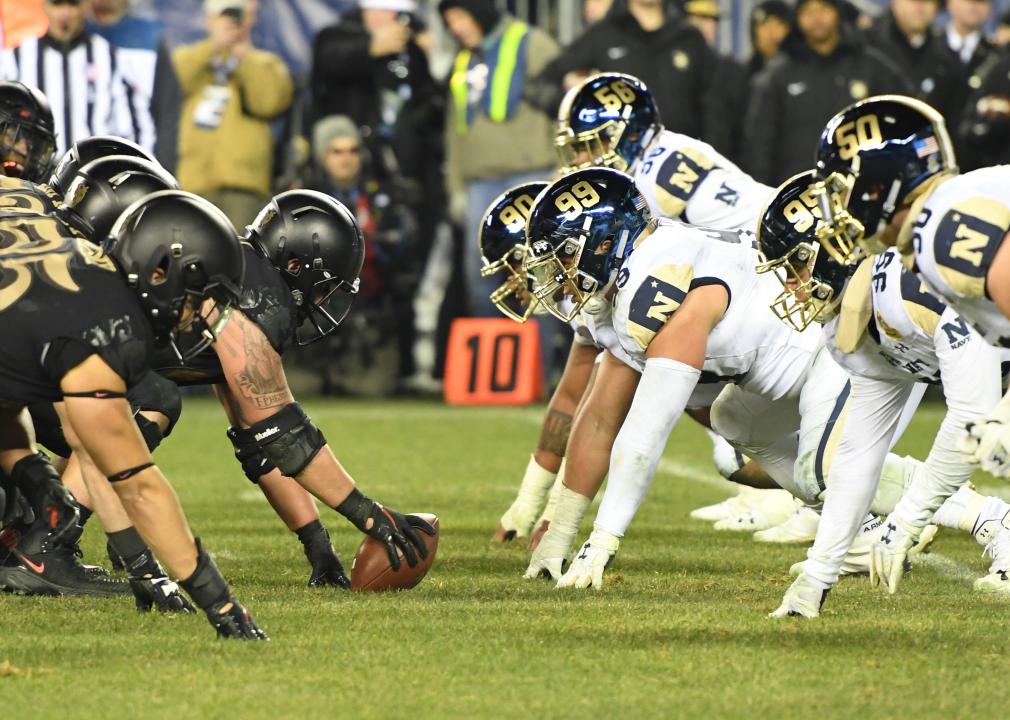 Patriotism is on full display at this game, arguably the most storied rivalry of them all. The contest for military-branch bragging rights annually matches the U.S. Military Academy Black Knights (West Point, New York) and the Navy Midshipmen of the U.S. Naval Academy (Annapolis, Maryland). As "America's Game," it's been played at 18 different stadiums, but most often in Philadelphia, including this year's game (Dec. 10). The next five will be played in five different East Coast cities. 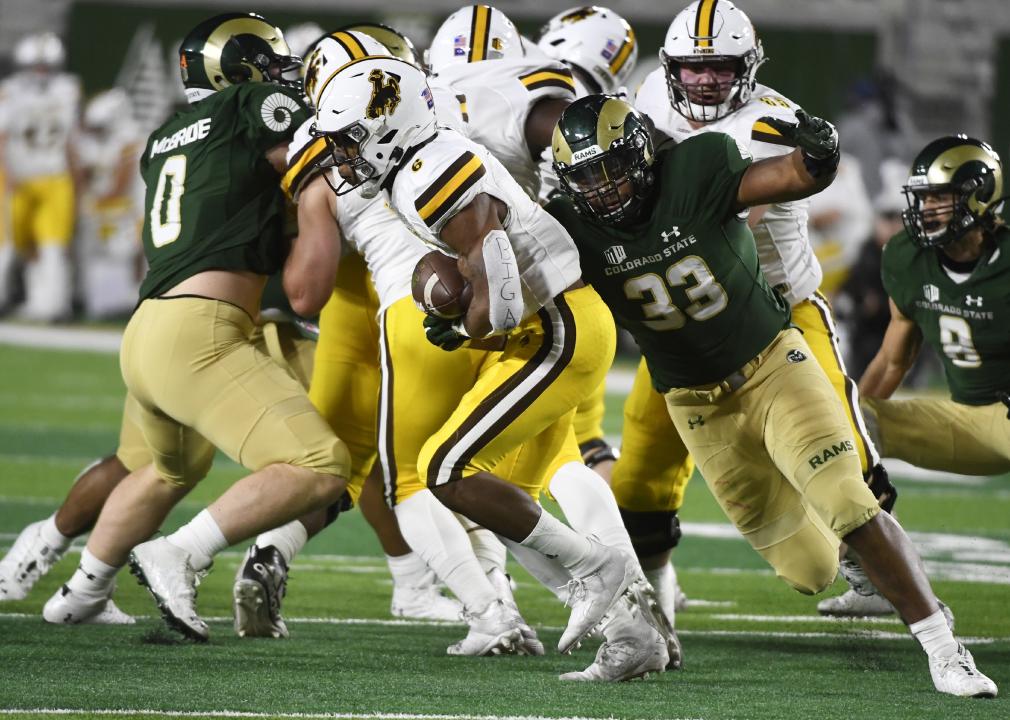 These two teams are rarely part of the conversation among college football fans—except in Fort Collins, Colorado, and Laramie, Wyoming. Colorado State won 30 of the first 35 games, but Wyoming has closed the gap by winning nine of the last 13. Both have enjoyed good success in the Mountain West Conference, with Wyoming taking 14 titles and Colorado State taking 15. The Bronze Boot, a traveling trophy once worn by a Colorado State ROTC instructor, goes to the winner. 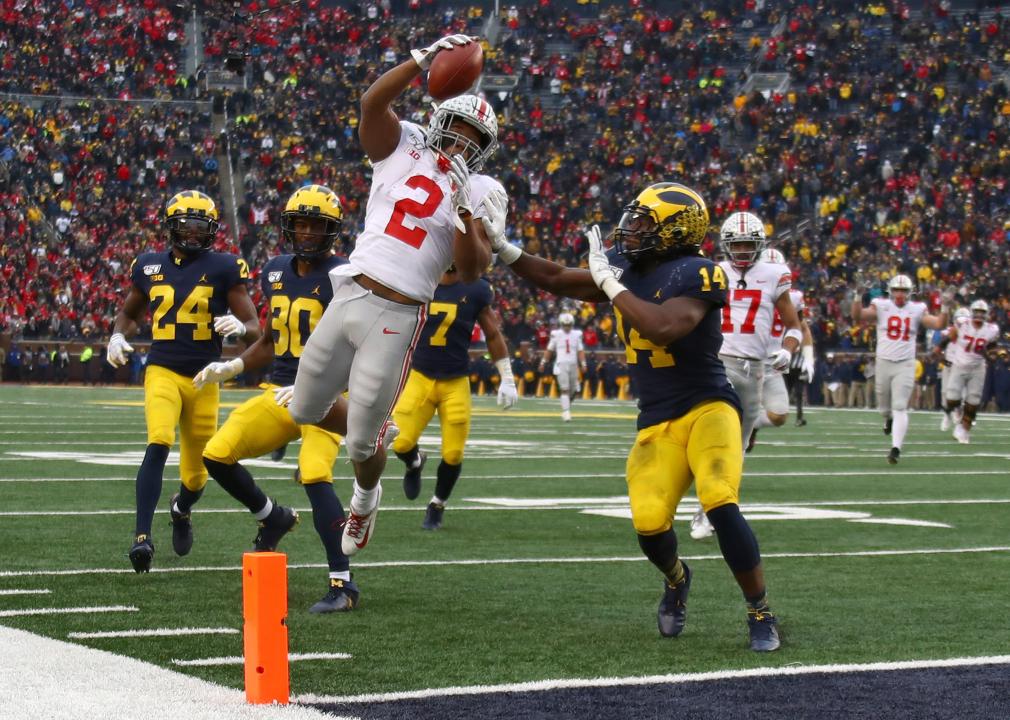 If you want to see this game in person, open your wallet. Most tickets go for north of $200 apiece, which seems steep when you consider each team's stadium holds more than 100,000 fans, but the rivalry is that hot. Both teams are routinely nationally ranked, making their meetings often important enough to determine the conference title or bowl-game placements. The pinnacle of this rivalry came in 2006 when both undefeated teams were ranked first and second, respectively; Ohio State won that "Game of the Century," 42-39. 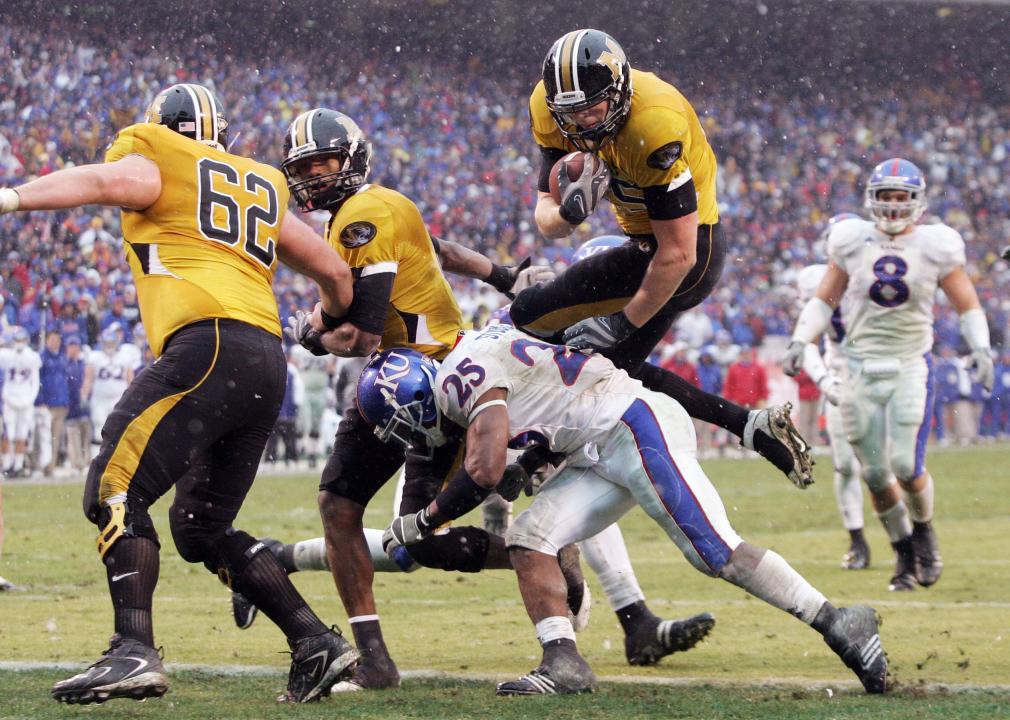 Kansas and Missouri are natural rivals as it's only a 2 1/2-hour straight shot on I-70 between the two campuses. Officially called the "Border Showdown" since 2004, the rivalry is historic partly because the rivals' 1911 square-off in Missouri is regarded by the NCAA as the first-ever homecoming game. Homecoming is a tradition that later spread to countless college and high school series, usually featuring archrivals in games that feature big crowds of students and alumni and special events that surround the games. Missouri's jump to the SEC in 2012 put a temporary end to the series, but it was announced in 2020 that the teams would resume the series in 2025, 2026, 2030, and 2032. 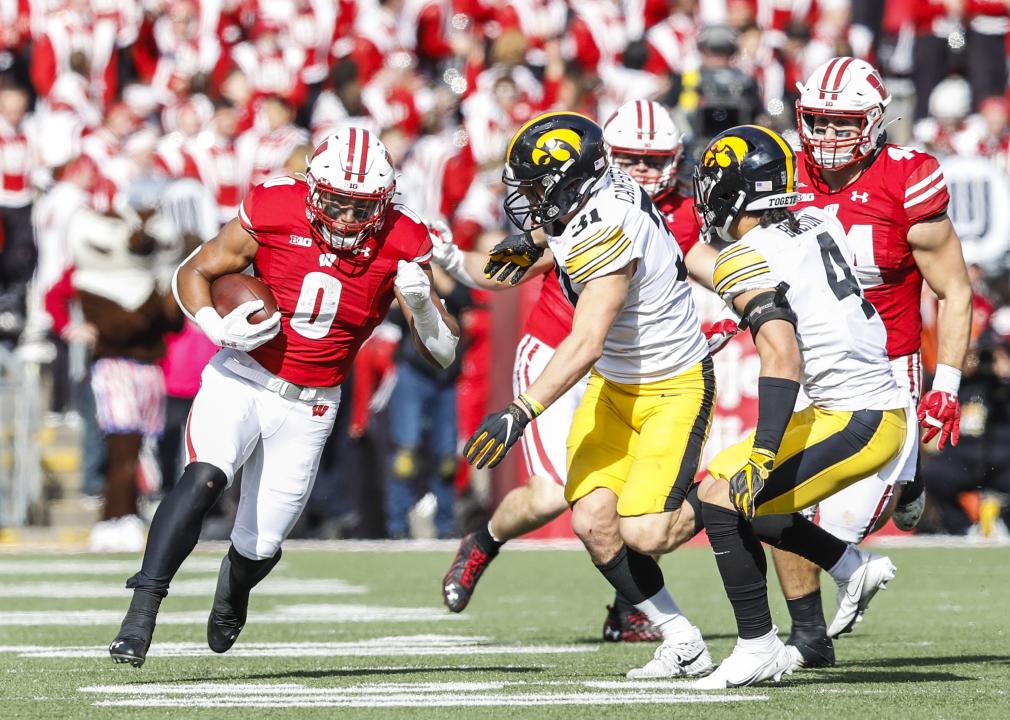 One or both of these Big Ten teams were ranked in the top 25 nationally for the last decade when they played, so this rivalry is closely watched. Wisconsin has had more success lately, winning eight of the last 10 and chipping into Iowa's now-slim series lead. Wisconsin won the first contest in 1894 by a score of 44-0, but since then games have been markedly closer in score, with few precious blowouts—the last two coming in 1996 (Iowa on top) and 1998 (Wisconsin winning), when the teams traded 31-0 victories. Each year, the winning team earns the Heartland Trophy, which depicts a brass bull. 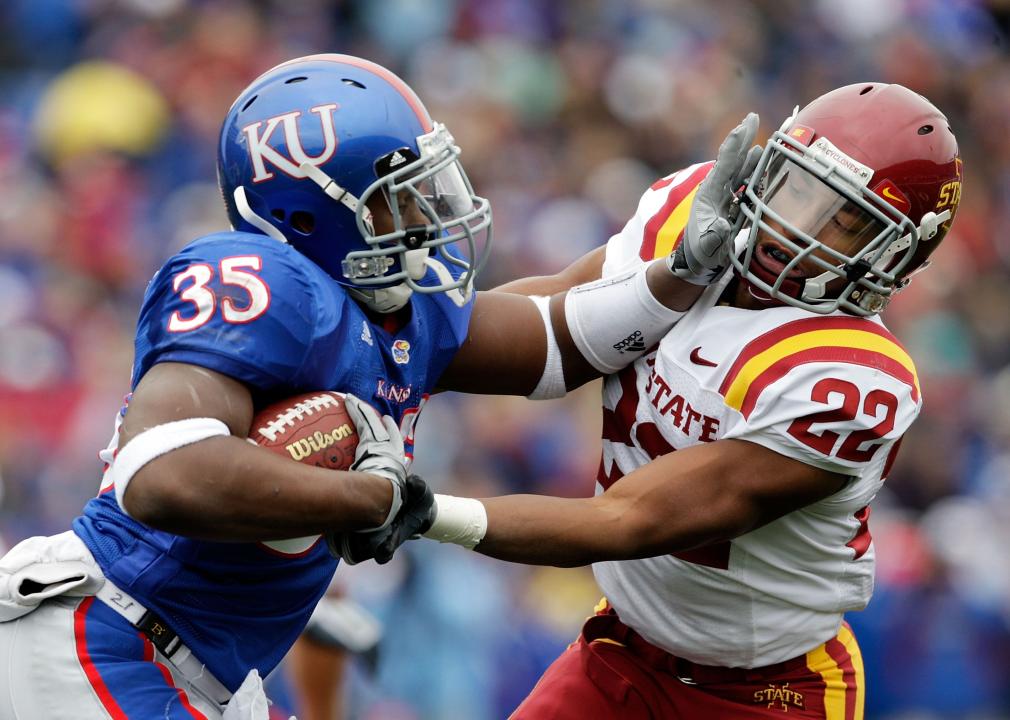 Most longtime rivalries are interrupted for a year or two at least once due to a world war, a pandemic, or simply a football conference realignment. Not this one. This annual meeting between the Iowa State Cyclones and Kansas State Wildcats has been played every year without fail since 1917. Kansas State has won 25 of 32 since 1990 but still needs to win a few more to take over the series lead. The series holds enough interest in the Heartland that it's twice been held at Kansas City's Arrowhead Stadium, with Kansas State narrowly winning those 2009 and 2010 games. 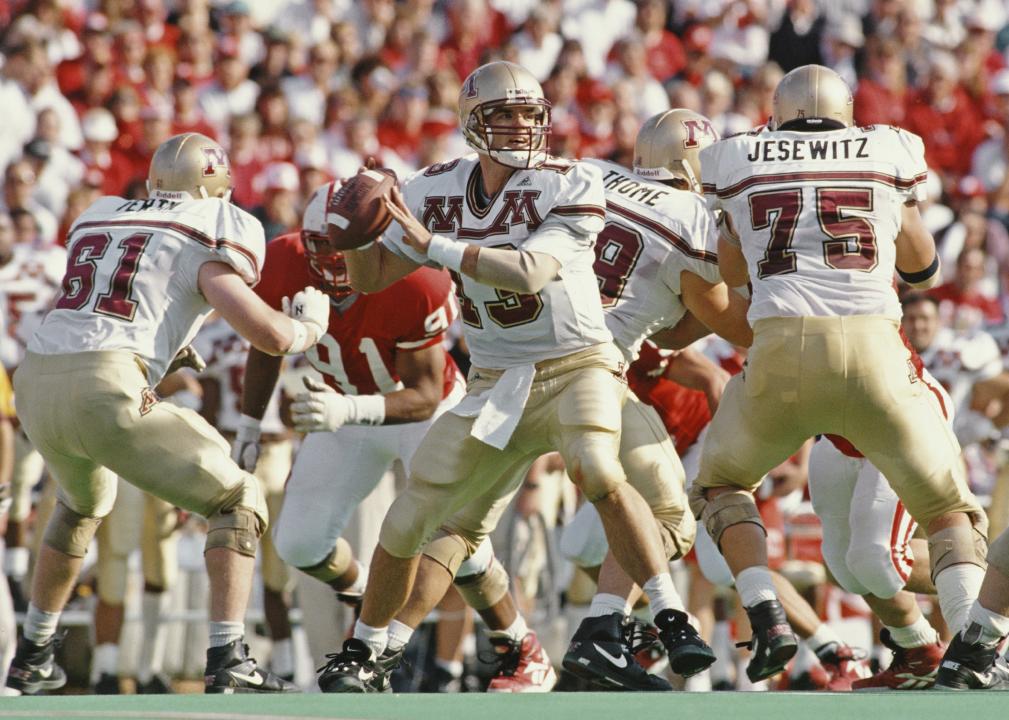 No college football rivalry has been as durable as this one, featuring a record 129 meetings dating back to 1892. And with a scant three wins separating their records against each other, almost no other rival teams have been as evenly matched. Only a decree by a U.S. president prevented them from never missing a year; Theodore Roosevelt ordered that no rivalry games be played in 1906 for safety reasons (players were getting badly injured or killed in those pre-helmet days). The annual winner gets to keep "Paul Bunyan's Axe." 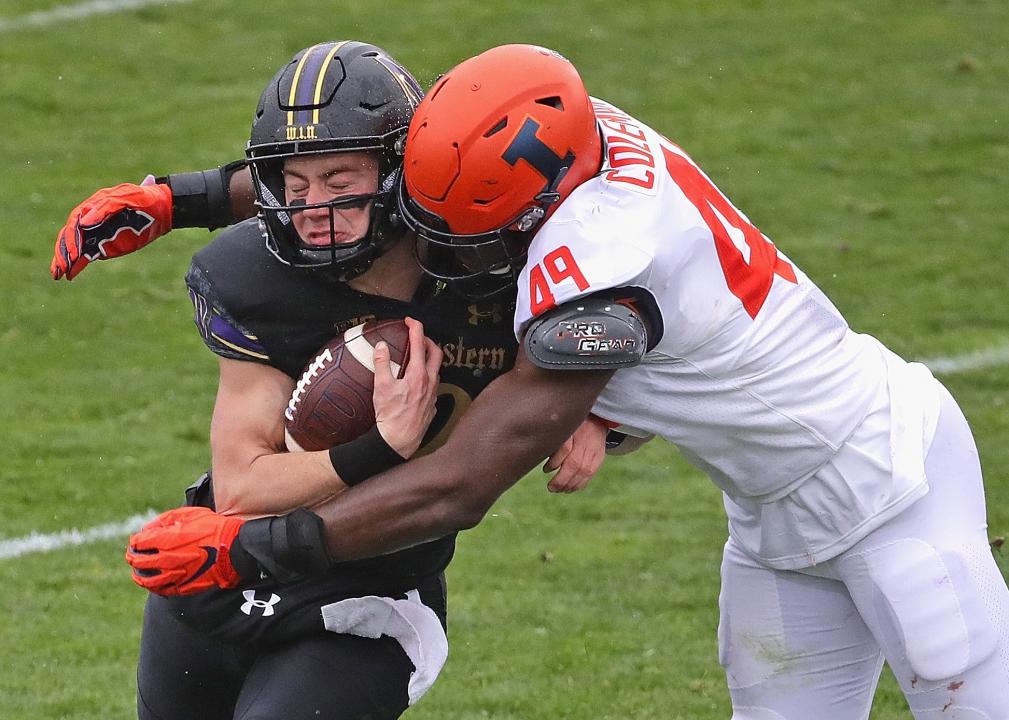 Illinois enjoyed a satisfying 47-14 blowout win over Northwestern in 2021, which ended a six-win Fighting Illini losing streak in the series. Thus, the Land of Lincoln Trophy will reside in Urbana, Illinois—at least until their next game on Nov. 26, 2022. The trophy replaced the "Sweet Sioux Tomahawk" in 2009, which was regarded as offensive to Native Americans. The following year, the two teams played at Wrigley Field, home of the Cubs, though the baseball-field dimensions required that both teams shared the same end zone. 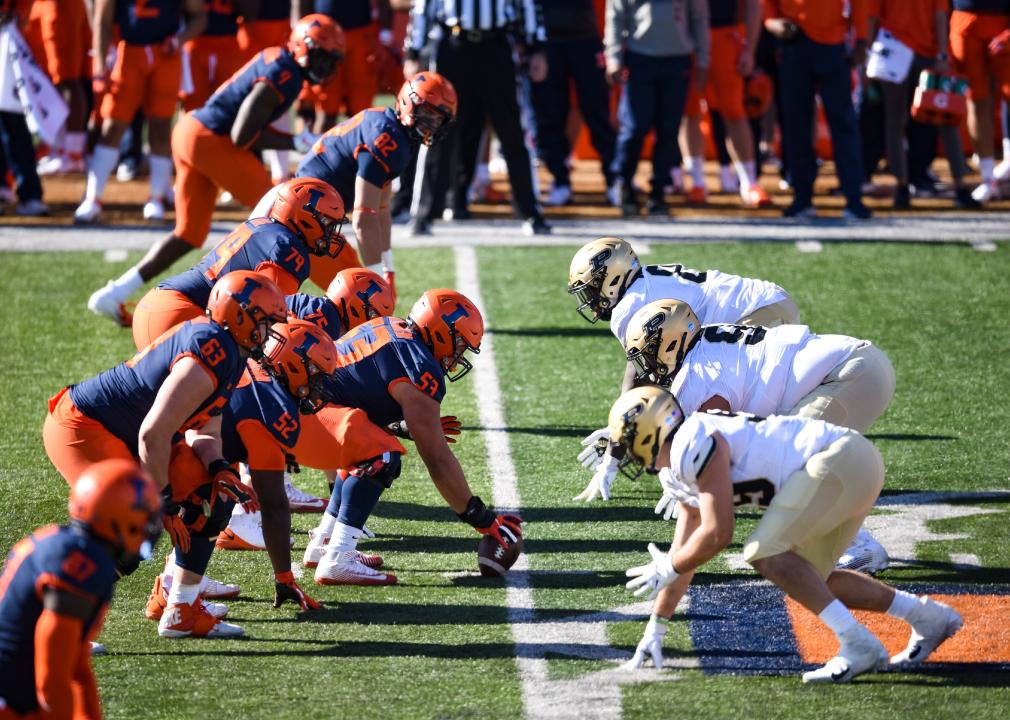 No two teams that are part of a major college football rivalry are as closely matched as the Fighting Illini and the Purdue Boilermakers. Their historic record stands in a dead-heat, and although Purdue has won their last two contests, both games were close (31-24 and 13-9). The victors get to keep a miniature replica of a cannon that was first brought to the game by Purdue students in 1905.

This story originally appeared on Best Universities and was produced and distributed in partnership with Stacker Studio.