‘Right place, right time. We were there:’ Good Samaritans alert residents of fire at Oviedo on the Park

Harmless vs. venomous snakes in Florida: How to tell the difference

ORLANDO, Fla. – Out of the 50 species of snakes native to Florida, only six are venomous but some harmless snakes avoid predators by impersonating their dangerous counterparts.

Can you tell the difference between a dangerous coral snake and a mild-mannered king snake? Is that angry-looking "viper" in the flower bed really as vicious as it seems?

News 6 partner Florida Today offered the tips below on how to spot the differences between venomous snakes and harmless fakers. 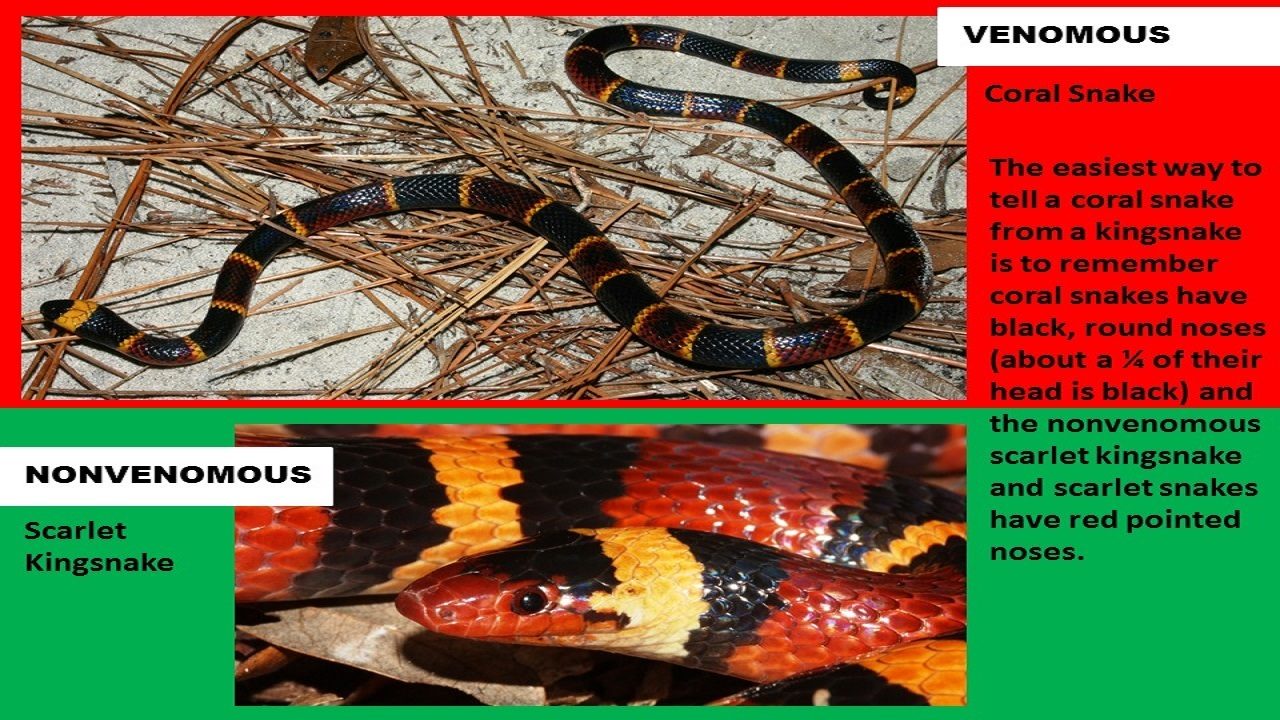 If you grew up anywhere in the coral snake's large southeastern range, you probably heard the rhyme, "If red touches yellow, it's bad for a fellow. If red touches black, friend of Jack," or something similar. It's an easy way to remember that the narrow bands are yellow on a coral snake and black on a king snake.

But, as is the rule for all snakes, stay away if you're not sure. 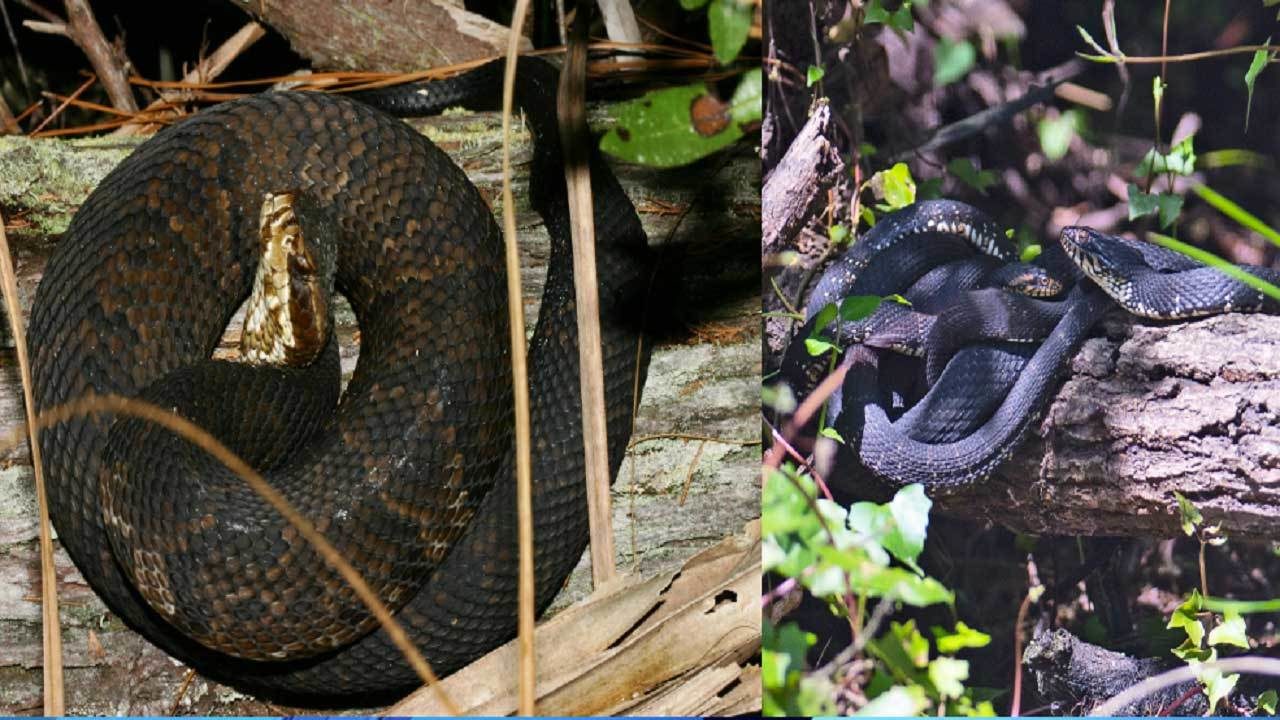 The trouble with brown snakes is they all look very similar. The cottonmouth is a common and venomous Florida snake, also called a water moccasin. It's a semi-aquatic viper that you might find around any body of fresh water in the southeastern United States. It's named for the pale coloring inside its mouth. Most importantly, the cottonmouth packs a mean and potentially deadly bite.

Banded water snakes have a similar patchy brown appearance, and they can flatten their heads to look like vipers when they're threatened. But they are, in fact, non-venomous lookalikes that have mastered the art of disguise.

The visual difference between the two is the shape of the head and body. A cottonmouth has a heavy body and a blocky, wedge-shaped head. A water snake has a slender body and small head, with no distinct neck. When threatened a water snake can flatten its head and body to create a shape similar to a cottonmouth, but the head will look flat, not blocky.

The cottonmouth also has a narrow, vertical pupil, while banded water snakes have round pupils. 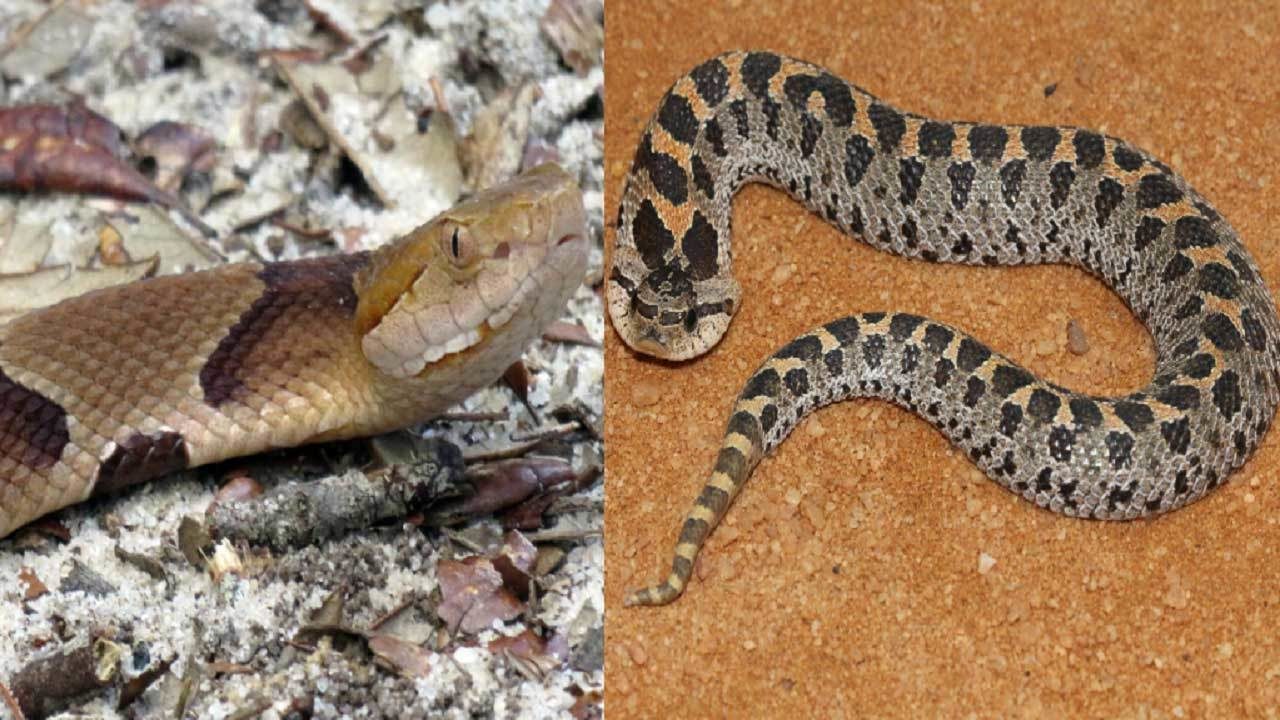 Copperheads are not as common in Florida as other parts of the southeast, but their range does include parts of north Florida and the panhandle. Rarely, copperheads are spotted further south in the peninsula. They are pit vipers with very effective brown and tan camouflage. Copperhead bites are painful, but very rarely fatal.

Hognose snakes come in a variety of colors and patterns. They can be recognized by their pointy, upturned noses. Sometimes called "puff adders" in Florida, these snakes are harmless. When threatened, they mimic vipers by raising and "puffing up" their heads with air while they coil their bodies. Some hognose snakes can also flatten their heads to take on a cobra-like appearance. They will hiss and strike with their pointy noses, but they don't attempt to bite. If the viper charade doesn't work, they'll roll over and play dead.

If you come across a patchy, brown snake that coils its body and raises its head like a viper, use your ears. Copperheads don't make a sound. They'll freeze when threatened and only strike as a last resort. Hognose snakes, on the other hand, make hissing sounds when they're impersonating vipers.

Hognose snakes can't exactly mimic the signature triangular head shape of a viper. Their heads look rounder and puffy. They also have black eyes, whereas copperheads have yellow eyes. 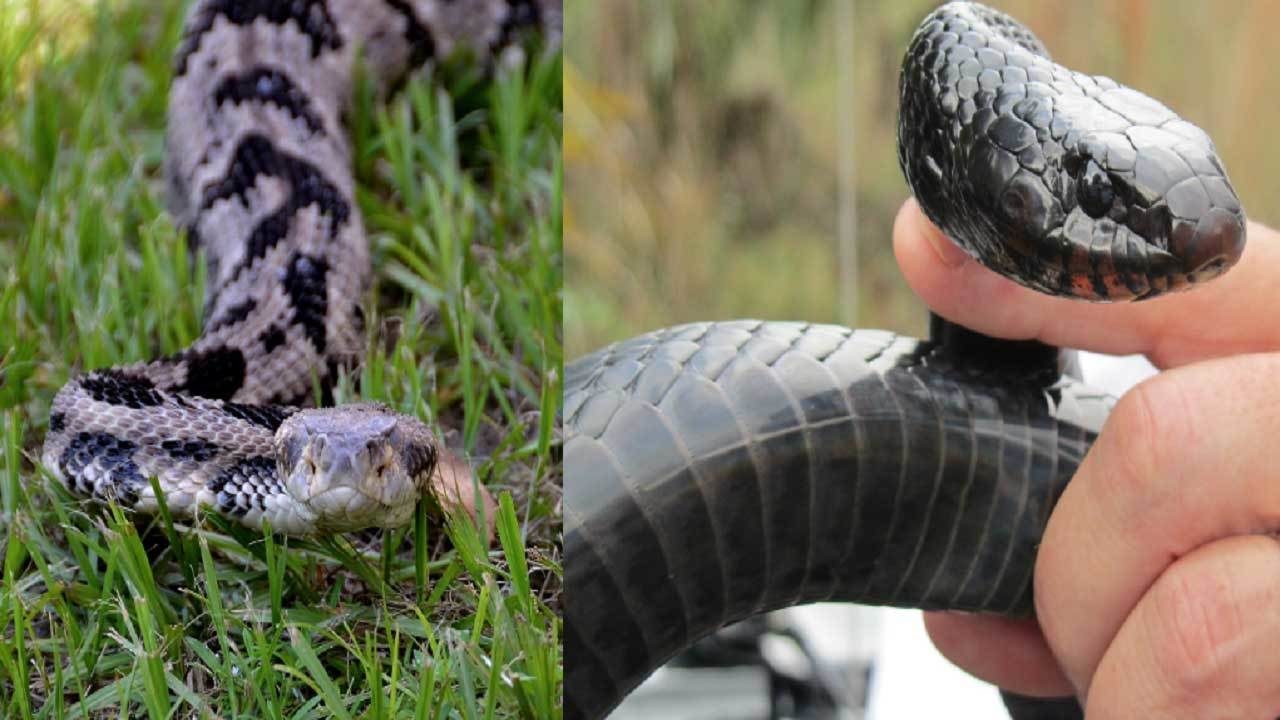 Florida is home to three different species of rattlesnake: the pigmy rattlesnake, the eastern diamondback and the timber rattlesnake. All three are venomous. While bites are rarely deadly, rattlesnake venom causes painful swelling and an untreated bite can result in serious complications.

Rattlesnakes are easily identifiable by their warning rattle and viper characteristics. Like all snakes, they'd rather not tangle with a human, but rattlers are quick to strike when threatened.

The eastern indigo snake is not venomous and doesn't have fangs or a rattle, but that doesn't stop it from acting like a rattlesnake. When threatened, they'll flatten their heads, hiss and vibrate their tails like rattlesnakes.

In reality, the indigo snake is a gentle giant. Adults can be up to seven feet in length, with glossy black or dark blue scales. They're known to be docile and are very reluctant to bite. Indigo snakes are one of several species commonly referred to as a "black snake" in the southeast.

The visual differences between a real rattlesnake and an indigo snake are obvious. Besides their signature rattle, rattlesnakes have mottled brown or gray and black coloring and triangular heads. Pigmy rattlers can have orange or red spots along their backs. The largest rattlesnake in Florida, the eastern diamondback, is rarely more than five feet long.