Happy birthday, Mickey: 11 things you didn't know about the most famous mouse

ORLANDO, Fla. – Mickey Mouse "officially" turns 90 on Sunday, marking a long life as a beloved character who also draws millions of tourists to the Orlando area each year from around the world.

News 6 theme park expert Ken Pilcher put together a top list of things people might not know about the world-famous Mickey Mouse.

From the start, Minnie Mouse appeared by Mickey's side, co-starring in all of the first short cartoons that gave Mickey his big break.  Mickey went on to star in about 130 shorts between 1928 and 1952. Minnie is in about 66 of them.

A few years after Walt Disney died, Disney Studios hired archivist Dave Smith to catalog Walt Disney's papers and mementos. That project evolved into one of the largest, most comprehensive and best-run archives of any corporation in history.  In 1978, Disney marked the celebration of Mickey's 50th birthday worldwide with parties and events at both Disney theme parks -- back then, it was just Disneyland and Walt Disney World's Magic Kingdom.

Ahead of the celebration, Disney's publicity department had to know when Mickey was "born." Smith settled on Nov. 18 as it was the day "Steamboat Willie" debuted at the Colony Theater in New York City in 1928. Before Smith's decision, Mickey's birthday was celebrated all over the fall calendar. The first known celebration was Mickey's third birthday on Oct. 24, 1931. A studio guide from 1935 says his seventh was Sept. 28.

No. 3 'Steamboat Willie' is not the first Mickey Mouse cartoon.

Walt Disney wowed audiences and made movie history with "Steamboat Willie," but It was actually the third Mickey short film to be made. "Willie" came out about a year after Al Jolson's "The Jazz Singer" became the first feature film with synchronized sound.

"Willie" is the first cartoon with a fully synchronized soundtrack. To create it,  Disney and his team had to make a bouncing ball animation to help musicians keep in time with the action on the screen. While forward-thinking, sound was also Walt Disney's way to get Mickey and Minnie before audiences. Their first film, "Plane Crazy," was given a test screening in May of 1928. Back then, distributors didn't exactly go crazy over "Crazy."  They saw it as just another silent cartoon. After "Willie" won over audiences (and made money), Disney added synchronized sound and released "Plane Crazy" and Mickey's second short, "The Gallopin' Gaucho."

All three were almost single-handedly drawn by legendary animator Ubbe Iwerks.  Personally, I think "Crazy" is the best of the three.

No. 4 Mickey's famous falsetto was voiced originally by Walt Disney.

Mickey first spoke in his ninth film, with the words "Hot dog!" in 1929's "The Karnival Kid." Walt Disney voiced Mickey then, and he continued in that role through 1946. Disney sound effects wizard Jimmy McDonald was handpicked by Walt Disney to take over halfway through production of the "Mickey and the Beanstalk" section of 1947's "Fun and Fancy Free."

To my ears, it sounds as if Walt Disney himself voiced Mickey again in the "Mickey Mouse Club" TV show from 1955-59.  Other than that, McDonald was Mickey's official voice until he trained a young assistant in the mid-1970s.

Wayne Allwine first voiced Mickey in 1977's "New Mickey Mouse Club" and continued in the role until his death in 2009.

At least, their voices did. Veteran voice actress Russi Taylor became Minnie's voice in 1986. She met Wayne Allwine on the job that year. Around the time of "Who Framed Roger Rabbit" (1988), they fell in love, and they married in 1991.

While Allwine played Mickey just a little longer than his predecessor (32 years at the time of his death) Taylor has been Minnie Mouse far longer than anyone else and still voices the role in TV, movies and theme parks to this day.

Anyone who was lucky enough to meet Allwine and Taylor together in person will tell you they both embody the spirit of their most famous characters.

While he became something of Walt Disney's alter-ego -- kind of like Jim Henson and Kermit the Frog -- Mickey was not the first Disney star.

Oswald the Lucky Rabbit became such a Hollywood hit in 1927 and 1928, that Walt Disney's distributor, Charles Mintz, stole Oswald and most of Walt Disney's animators to open his own studio, which Universal distributed. The Disney company won Oswald back in 2006. CEO Bob Iger traded ABC and ESPN sportscaster Al Michaels to NBC Universal in exchange for rights to the character and Walt's Disney's 26 shorts.

However, Oswald wasn't Disney's first star, either. From 1923 to 1927, Disney created 57 shorts starring "Alice in Cartoonland," a live-action girl living in a cartoon world. The first Alice, Virginia Davis, was named a Disney legend in 1988. Alice's cartoon co-star, Julius the Cat, didn't have staying power, but their rival, Pete, went on to harass Oswald, Mickey Mouse, Donald Duck and Goofy.


No. 7 Mickey was one of Hollywood's biggest stars.

Mickey became a superstar almost immediately, with a popularity that rivaled even Charlie Chaplin.

Disney played on that fame with the 1933 short "Mickey's Gala Premier," where literally dozens of the biggest names in Tinseltown turn out to meet Mickey in person. The first "Mickey Mouse Club" wasn't a TV show, but a real club that drew kids every week to some 60 movie theaters starting in 1930 and 1931. Those clubs had more than 1 million members by 1932.

Mickey was also the first cartoon character with a star on the Hollywood Walk of Fame. That honor came in 1978 for Mickey's 50th birthday. 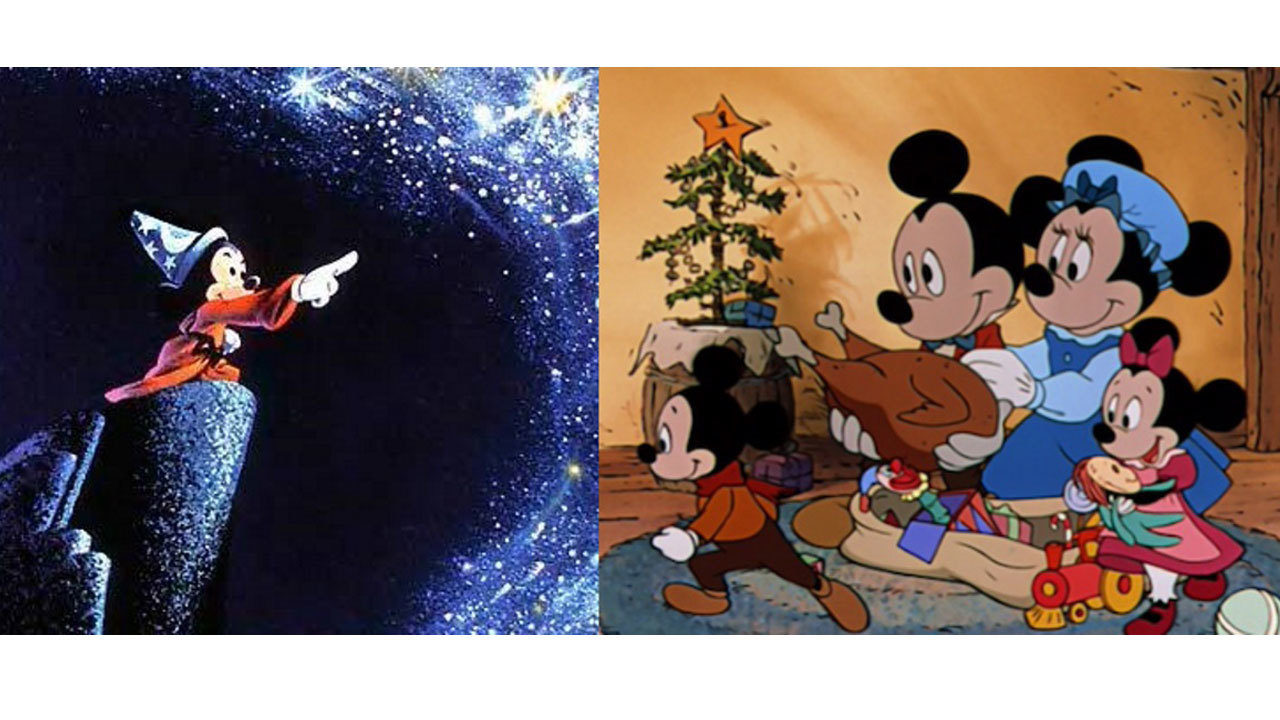 No. 8 Mickey is the ultimate comeback king.

Like many superstars, Mickey's popularity faded in time, eclipsed by a certain duck with a temper. One reason: Mickey had become so famous, Disney had to make him less and less mischievous and more and more the nice guy or parents would complain.

Walt Disney created "The Sorcerer's Apprentice" as an elaborate showcase to bring Mickey back into the spotlight. Like many stars of a certain age, that comeback came with a facelift. Shortly before the short, which became the heart of 1940's "Fantasia,"  legendary animator Freddie Moore redesigned Mickey, giving him pupils for the first time.

After 1952's "The Simple Things," Mickey retired from the silver screen, briefly starring on television before largely becoming the host of Disney's theme parks worldwide.  He had a second big-screen comeback with 1983's "Mickey's Christmas Carol."  Finally, in modern film-speak, he was given a "reboot" in 2013 with a series of TV shorts aimed at appealing to a new generation, while regaining his old pluck from the early days. They are still in production.

No. 9 Mickey and Minnie are headlining a new attraction coming in 2019.

The animators and creative team from these new shorts are working with Walt Disney Imagineering to create "Mickey and Minnie's Runaway Railway." It  will replace "The Great Movie Ride" inside the Chinese Theater at the heart of Disney's Hollywood Studios in 2019.

Billed as a ride that will put guests inside a cartoon, it will feature ride cars that move on their own without a track and something Disney calls 2 1/2-D: no glasses required.

That's Mickey's first ride, but it's not his first attraction.

Maestro Mickey conducted an audio-animatronics orchestra in "The Mickey Mouse Revue" from 1971-1980 in Walt Disney World's Magic Kingdom. That show hit the road and opened with Tokyo Disneyland, playing there from 1983-2009. The same "3 Caballeros" animatronics featured at the end of Epcot's "Gran Fiesta Tour" came here from Tokyo, but they first appeared in the Magic Kingdom's "Revue" in 1971.

The 4D Attraction "Mickey's PhilharMagic" debuted in 2003  in the same theater where "Revue" once played. It now plays in "Revue's" Tokyo theater, as well.

Or he's a clothes hoarder, depending on how you look at it.  A few years ago, Walt Disney World publicity told me Mickey had 136 different sets of duds, ranging from a scuba suit to a tuxedo. That's more than Minnie Mouse’s 100 outfits. The nifty nonagenarians will debut new 90th anniversary costumes this weekend.

While in 1933 the Mickey Mouse watch became a huge hit with fans -- and a major moneymaker for Disney-- arguably the most-loved Mickey merchandise is the famous mouse ear hat. Debuting as part of the Mouseketeers outfits on the television show the "Mickey Mouse Club," they were first sold at Disneyland in 1955 or 1956.