LIVE RADAR: Another round of storms, heavy rain expected for Central Florida

The highest coverage of storms will occur between 4 p.m. and 9 p.m.

LIVE RADAR: Another round of storms, heavy rain expected for Central Florida

More than 1,500 customers without power in Deltona, Duke Energy says

Red tide: Everything you need to know about the outbreak in Florida

Find out how toxic algae bloom could affect your health

Red tide has swept across beaches in Florida this summer and it could persist for several more months, leaving the shores littered with dead fish and other aquatic animals.

While most Floridians are at least somewhat familiar with the phenomenon, there are still many mysteries surrounding red tide and how it can be stopped. Still, experts have laid out some precautions beachgoers can take and provided ways Floridians can step up to help.

The following information, provided by the Florida Fish and Wildlife Conservation Commission, outlines everything we do and don't know about the red tide outbreak and its deadly repercussions.

What is red tide?

Red tide occurs when a microscopic alga occurs in a high concentration in the water. In the Gulf of Mexico, Karenia brevis, or K. brevis, is the species to blame. Toxins are released when the algae die and those toxins are deadly to fish, manatee and other marine life. If the algae concentration is high enough, it can also cause the water to turn red or brown, but that isn't always the case.

When did Florida's most recent outbreak begin?

Data from FWC shows that high levels of K. brevis were reported in southwest Florida, particularly in Charlotte and Lee counties, as early as October and into November and December. Concentrations were in the low-to-medium levels during January and February, then back to high again around March. In May, levels decreased, only to rebound in June, with high levels being reported as far south as Collier County. By the beginning of August, high levels were reported in Manatee, Sarasota, Charlotte, Lee and Collier counties. Outbreaks and fish kills have been reported along Florida's coast as early as the 1840s but this most recent outbreak has been the most persistent the Gulf of Mexico has experienced in more than a decade, according to CNN.

What bodies of water in Florida are affected? 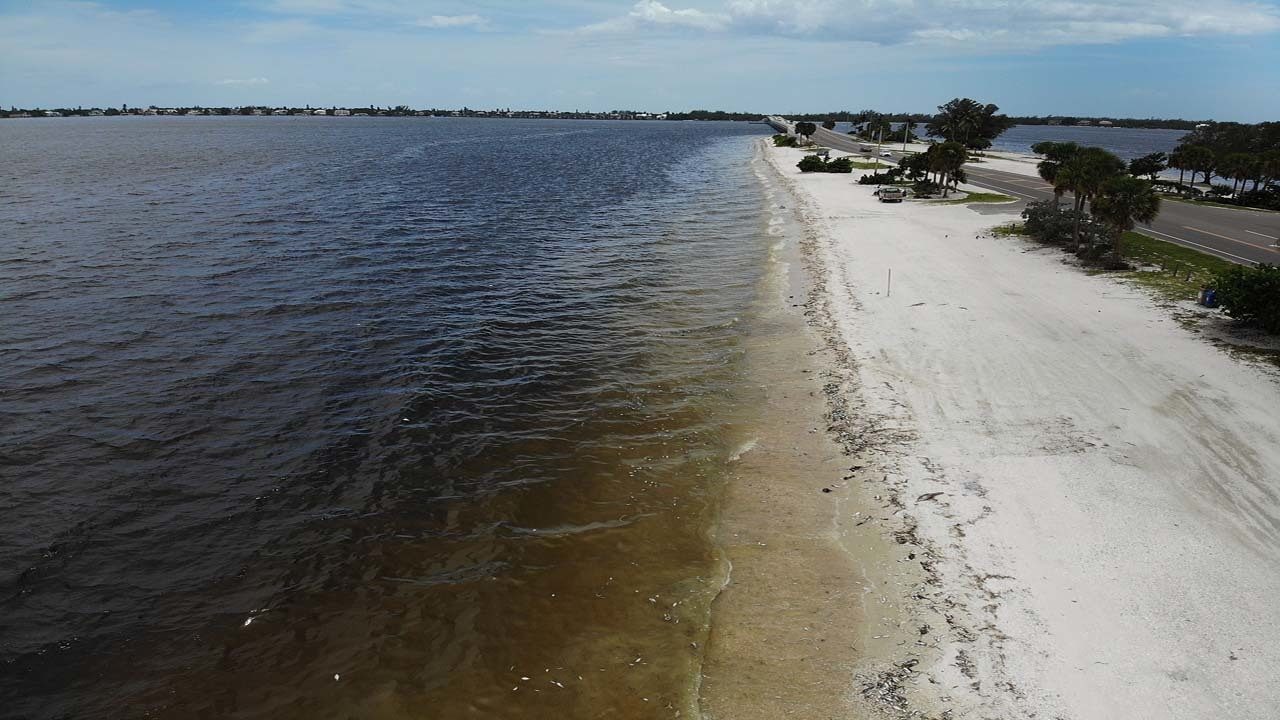 While red tide isn't unique to the Sunshine State, the K. brevis algae is, because it's exclusively found in the Gulf of Mexico, meaning beaches along Florida's west coast have been primarily affected. In Sarasota County alone, more than 61 tons of dead fish have been collected from the water in connection with the red tide, government officials said. Red tide can be found in bays and estuaries but not in freshwater systems like lakes and rivers because K. brevis can't survive in low-salinity waters.

Why are red tides harmful? 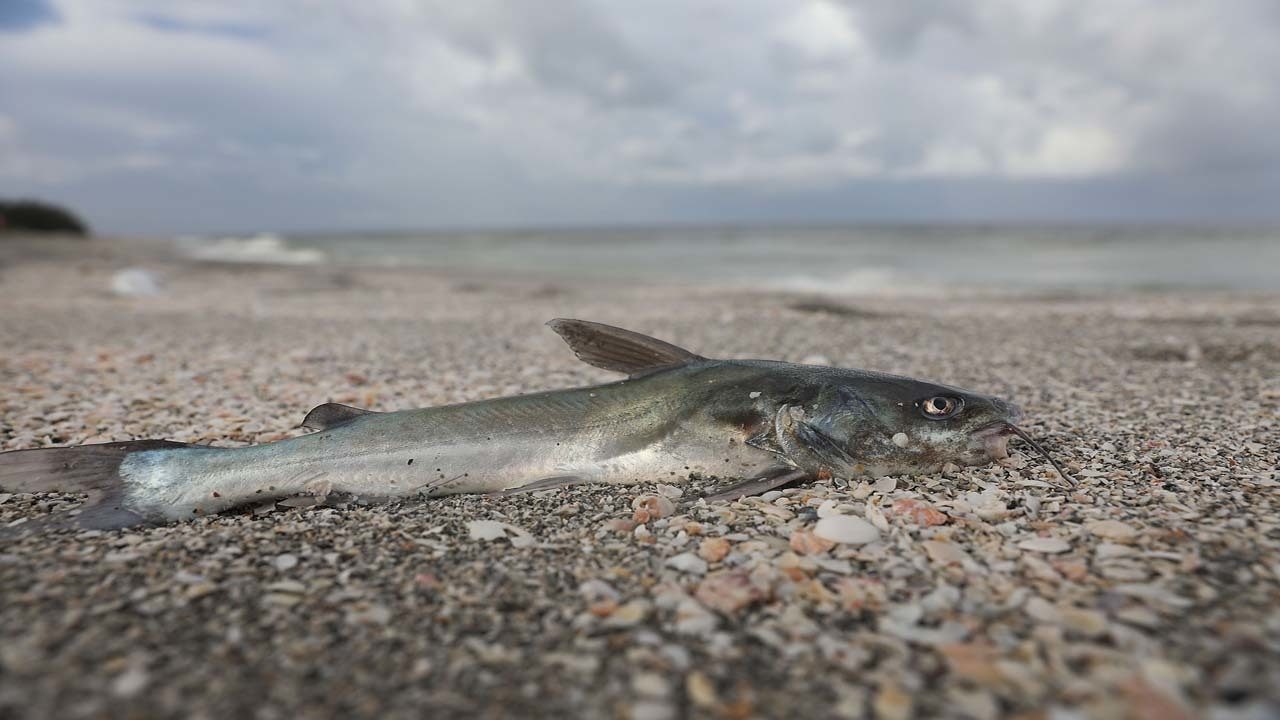 The brevotoxins produced by K. brevis when they die negatively affect the central nervous systems of marine organisms. Fish are the primary victims of red tides as they die off in masses. They experience violent twisting, regurgitation and defecation before their gills stop functioning, ultimately leading to their death. Other animals that eat contaminated fish, infected invertebrates such as shrimp, sponges, sea urchins and crabs, or that feed on contaminated sea grass and sediment, can also experience the effects of red tide. This includes birds, sea turtles, dolphins, manatees and in some cases whales and sharks.

Humans can also experience the effects of red tides, even without going into the water. Wave action can cause K. brevis to break and release toxins into the air, which can then be carried by the wind up to a mile inland. Breathing in the airborne toxins can cause coughing, sneezing, tearing, an itchy throat and other respiratory irritation. Anyone with a pre-existing respiratory ailment such as asthma should avoid coastal areas during a red tide outbreak. Those who live in coastal towns should keep their windows and doors shut and keep their air conditioning or heat running, being sure to regularly change the filter.

Is it safe to swim during a red tide? 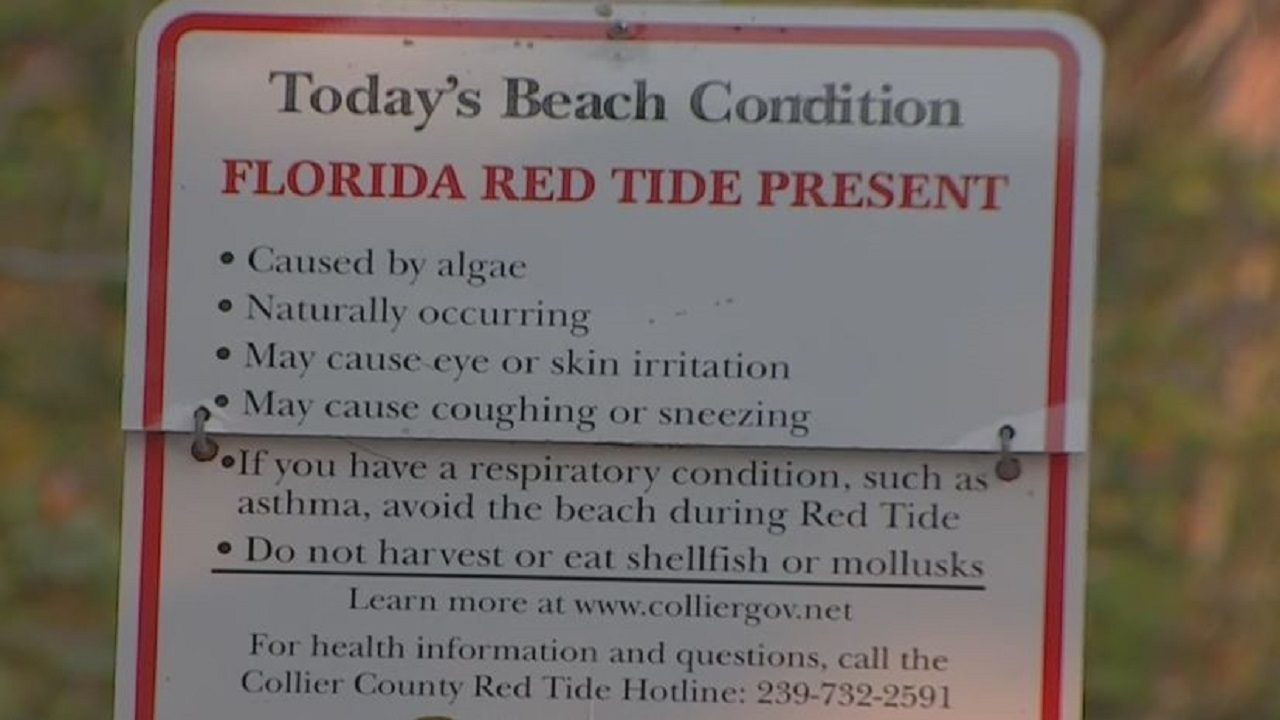 That really depends on a few factors. Anyone with respiratory issues or who experiences irritation from plant products should stay out of the water. If dead fish are accumulated, the water should be avoided entirely since those dead fish are likely associated with harmful bacteria. FWC officials say swimming is generally safe, although some swimmers report skin irritation or burning eyes. For pets, make sure that they do not eat any of the dead fish. Wash them as soon as possible after they get out of the water so they do not lick their fur and potentially consume any toxins.

How do we stop red tide?

This is where things get even more complicated. K. brevis overpopulation isn't caused by pollution, according to FWC, it has been reported since even before Florida's coast was heavily developed. However, man-made nutrient pollution can exacerbate K. brevis growth once it is inshore.

Researchers have struggled for decades to find a way to eliminate red tide without causing further damage to the ecosystem, because any solution would need to remove both K. brevis and the toxins they release into the air and water. So far, that hasn't been possible. The widespread nature of red tides -- sometimes spanning up to 10,000 square miles -- also poses a difficulty for researchers.

What can I do to help?