WATCH LIVE AT 5:30 PM: SpaceX to attempt another Starship test flight in Texas

ORLANDO, Fla.- – For the rest of Sunday night, most areas will be dry, but we can't rule out a few stray showers popping up over western zones.

Dry air has moved into central Florida with the tropical wave situated to our south.

This has kept the rain very isolated, and that trend will continue into Sunday. We'll start the day with mainly sunny skies, and the heat will settle in fast. Overnight lows in the mid-70s will rebound to near 90 by noon. The forecast high will be 94, but with continued high humidity, it will feel like the triple digits for most of the afternoon.

Rain chances are at 30%. A few showers will move into coastal Flagler and Volusia counties just after the noon hour and move to the west to southwest.

There could be times of heavy rain, but these events won't be widespread. Along the coast tomorrow there will be a decent amount of clouds around. Highs will reach the upper 80s to low 90s. It will turn a little breezy in the afternoon as the northeast wind picks up 10 to 15 miles mph.

The tropical wave located south of central Florida still has potential to develop, but it looks like it won't be until it moves to the northeast over the open Atlantic.

Meanwhile, Tropical Storm Dorian continues to move toward the west and looks to gain strength as it approaches the Lesser Antilles by Tuesday.

The latest forecast from the National Hurricane Center shows it could reach Category 1 hurricane status as early as Tuesday and maintain that over the Caribbean Sea as it moves closer to Puerto Rico and Hispaniola. This is still far away from central Florida, but it's definitely something worth watching into next week.

There's also an area of low pressure over eastern Texas into Louisiana that looks to move over land before turning into anything. 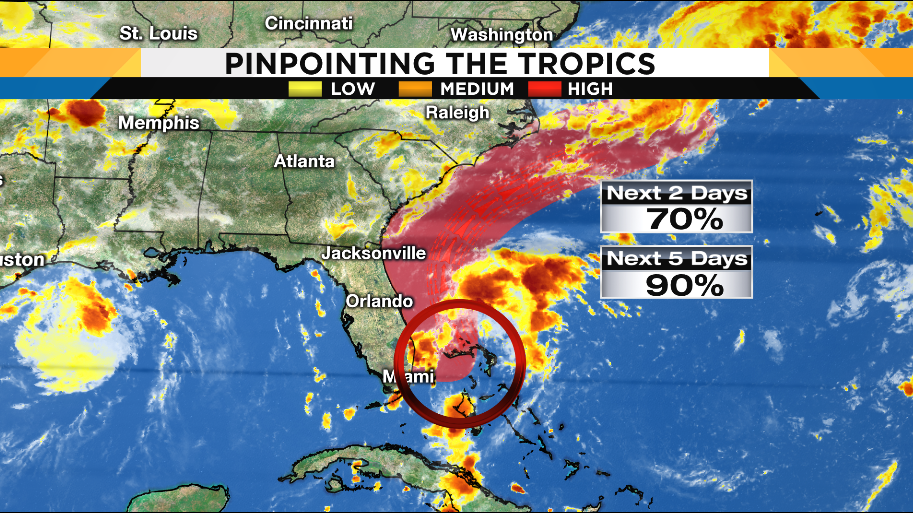 INVEST 99 (East of the Lesser Antilles)

Invest 99 is expected to trek west toward the Caribbean Sea. Even as computer forecasts take the system west, dry air is still dominating the tropical Atlantic. After the Lesser Antilles, the environment becomes less favorable for development. Stay tuned.

Now is a good time to make sure you have the Pinpoint Hurricane and Weather apps. Search WKMG in your app store and download them for free today!

Jonathan Kegges joined the News 6 team in June 2019 as the Weekend Morning Meteorologist. Jonathan comes from Roanoke, Virginia where he covered three EF-3 tornadoes and deadly flooding brought on by Hurricanes Florence and Michael.

Emmy Award Winning Meteorologist Samara Cokinos joined the News 6 team in September 2017. In her free time, she loves running and being outside.