Woman killed boyfriend by zipping him inside suitcase, leaving him alone for hours, deputies say

Beyoncé's concert to be held at Marlins Park in April

MIAMI – Beyoncé’s halftime show at the Super Bowl upset the Miami Fraternal Order of Police so much that on Wednesday they announced they are going to be boycotting her Miami concert in April.

The singer's performance made references to the Black Lives Matter movement, Malcolm X and the Black Panthers. The dancers wore Black Panther-style berets. And they raised their fists to mimic the historic black power salute that Tommie Smith and John Carlos gave at the 1968 Olympic Games in Mexico City.

After their performance, the dancers held a sign: "Justice 4 Mario Woods."  A San Francisco police officer shot and killed the 26-year-old in December after police said he ignored commands to drop a knife.  Middle school children filmed it. The coroner's report showed his body had 20 gunshot wounds, including six in the back.

"I did mistakenly watch her 'Formation' video that shows scenes of a young black boy dancing in front of police in riot gear, who signal their surrender by putting their hands up, referencing the 'Hands Up Don't Shoot' anthem of the Black Lives Matter movement," Miami FOP President Javier Ortiz said.

Beyoncé's video also shows her sitting on a police car and graffiti that reads, "Stop shooting us."  The superstar's Super Bowl performance was the most radical statement she has made in her 20-year career.

Her homage to the Black Panthers -- one of the most influential groups of the late 1960s --- also marked the 50 years since Huey P. Newton and Bobby Seale formed the black nationalist group in Oakland, near to the stadium. FBI director, J Edgar Hoover, called it "the greatest threat to the internal security of the country."

The New Black Panther Party is a group inspired on the original Black Panthers that says it promotes self defense. They have a presence in Miami, where there are about 22 active black separatist groups, according The Southern Poverty Law Center. Ortiz also alluded to the Miami FOP's view of the Black Panthers.

"I salute NYPD Officer Richard Rainey, who succumbed to his injuries on February 16 [1981] from being shot by two Black Panthers, who he had pulled over in a traffic stop," Ortiz said. "I also salute the dozens of law enforcement officers that have been assassinated by members of the Black Panthers." 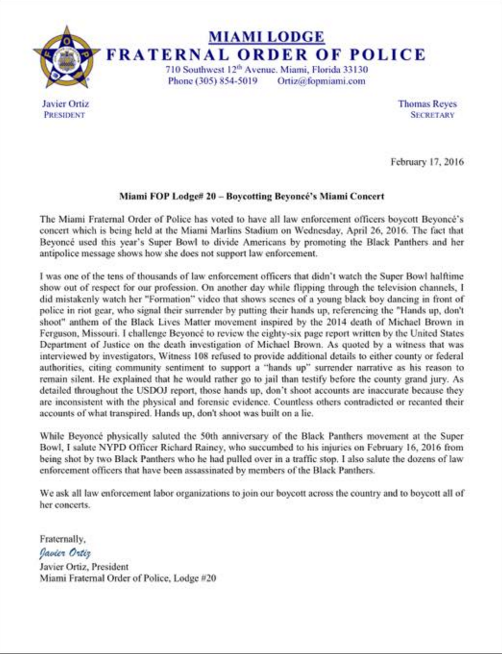 The Emmy Award-winning journalist joined the Local 10 News team in 2013.