Man implied he had weapon

TAVARES, Fla. – A Dunkin' Donuts worker told police a man threatened to kill her Wednesday as he robbed the restaurant.

They said surveillance video shows the man walking in the front door wearing blue gloves, and they said he quickly hid them. 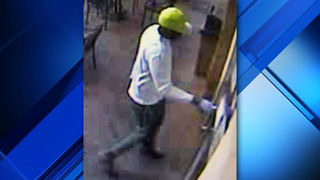 "(He) had his hand in his pocket, calmly walked behind the register, whispered to the girl working, 'Give me your money or I'll blow your brains out,'" Coursey said.

Surveillance stills obtained by News 6 show the man's face as he confronts the cashier, who appears to be pushing buttons to open the register. When she gets it open, the man appears to grab what he came for.

"He calmly grabbed the money. There was a couple customers inside, and no one even knew that he was robbing the place," Coursey said. "He was really quiet about it."

Witnesses told police the man ran out of the store and into a waiting white four-door Nissan Altima.

No one saw which way it took off, and investigators are searching for it and the robber. They describe him as a black male who is 6 feet 4 inches tall and weighing about 240 pounds.

Anyone who recognizes him from the surveillance photos is asked to call Tavares police at 352-742-6300.