Tropical Storm Ian is expected to strengthen into a major hurricane early this week.

Both blooms are plaguing Florida's waters

Waterways in Florida are fighting a multifront battle.

On the west coast, red tide is plaguing beaches, leaving literal tons of dead fish scattered across the shore line. In fresh bodies of water across the state, blue-green algae is in bloom, polluting lakes and rivers with a thick slime-like sludge.

Both phenomena are simultaneously wreaking havoc on Sunshine State ecosystems, yet there are several key differences when it comes to battling the two.

Below you'll find information -- provided by the Florida Fish and Wildlife Conservation Commission, Visit Florida and other state agencies -- on the similarities and differences when it comes to red tide and blue-green algae.

Both are algae and both are in bloom this summer, but a different microorganism is to blame for each. The dinoflagellate Karenia brevis, or K. brevis, is the alga responsible for red tide, while blue-green algae is caused by different types of cyanobacteria, namely Microcystis aeruginosa, which is believed to be to blamed for the massive bloom in Lake Okeechobee, according to researchers from the University of Florida.

Where is each one found? 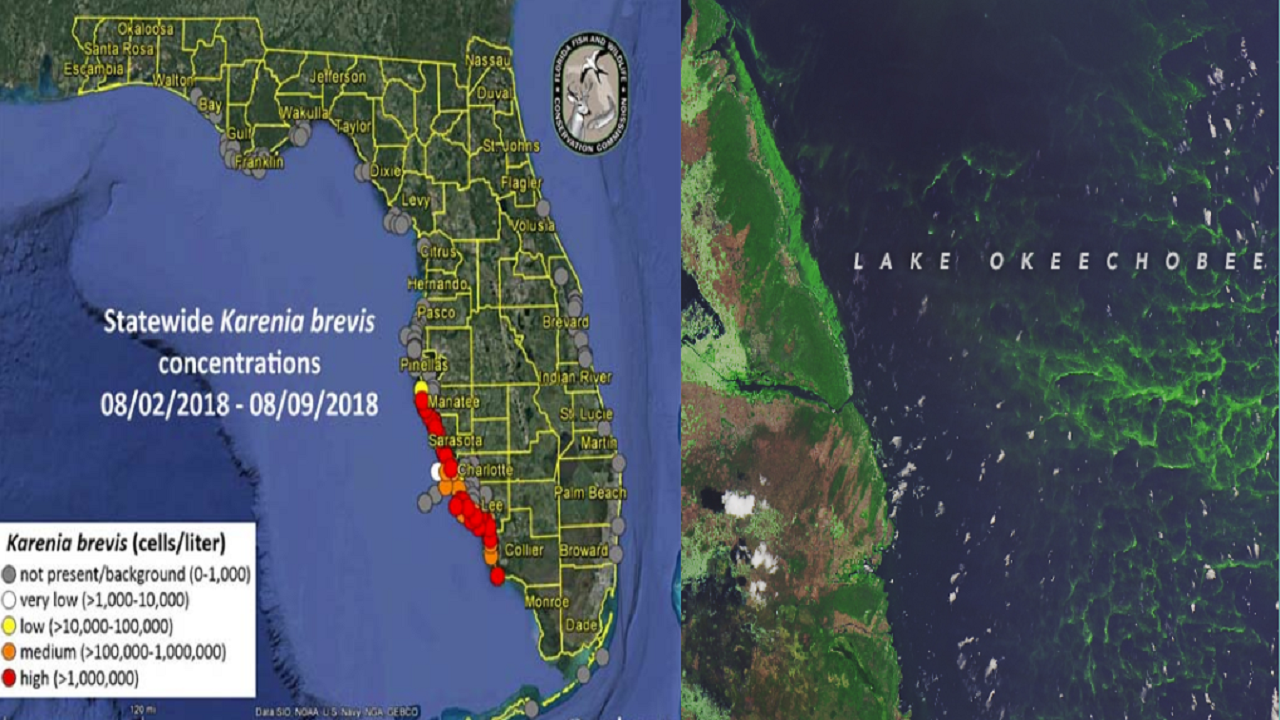 K. brevis, responsible for Florida's red tide, is exclusively found in the Gulf of Mexico, meaning you'll only see it on beaches along the west coast.  The Associated Press reports that as of mid-August, the bloom spreads 150 miles from Naples in the south to Anna Maria Island and appears to be continuing its trek northward.

Some species of blue-green algae can be found in the ocean, according to Mote Marine researchers, but the blue-green algae blooms Floridians are familiar with occur in fresh and brackish water habitats, meaning lakes, rivers and estuaries. It's blue-green algae that have preyed on Lake Okeechobee, the largest freshwater lake in Florida, and waterways in several other Florida counties.

Can they be predicted? 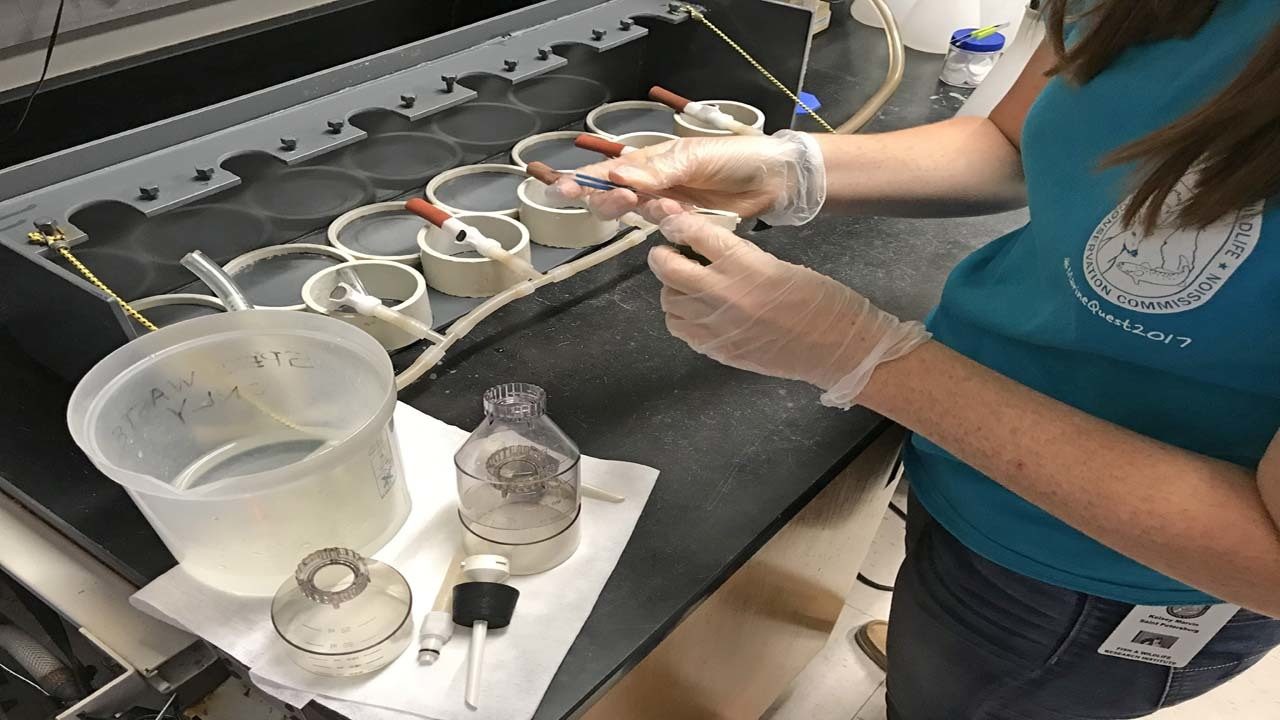 Not exactly. Red tide occurs most every year in the Gulf of Mexico during late summer to early fall, according to FWC, but the severity differs. CNN reports that the current outbreak, which began in October, is the most persistent the Gulf has experienced in more than a decade. The National Oceanic and Atmospheric Administration monitors K. brevis blooms to forecast location and density of the outbreaks, while satellite imagery can be used to forecast location. You can see that NOAA forecast by clicking here.

It gets even trickier when it comes to dealing with blue-green algae.

Karl Havens, a professor at the University of Florida and director of the Florida Sea Grant Program, writes that blooms are unpredictable, but researchers believe they tend to happen after heavy rainfall causes pollution from the land to run off into the water. While red tide tends to occur cyclically, blue-green algae blooms are more weather-dependent, so it's harder to know when they will begin and end.

Are the health effects the same?

Red tide is the one killing countless fish and other marine life -- birds, manatees, sea turtles and more. That's because when K. brevis dies, it releases a toxin that affects the central nervous system of any creature that consumes it, particularly fish, eventually causing death. The toxin can become airborne when water breaks, causing sneezing, coughing, throat irritation and other respiratory issues for anyone who breathes it in, including humans.

FWC notes that toxins produced by the cyanobacteria that's to blame for blue-green algae blooms can cause humans to experience nausea, vomiting and even acute liver failure in severe cases if the affected water is ingested. Skin irritation, swollen lips, eye irritation, earaches and sore throats are other symptoms people can experience if they swim in water during a blue-green bloom, although swimming or any other contact with the water is not recommended.

How do we stop these blooms?

Scientists have been trying, but it hasn't been easy. Red tide is particularly difficult to stop because a solution would need to remove K. brevin and the toxin it releases into both the air and the water without negatively impacting the ecosystem. So far, no solution has been reached, with FWC officials pointing out that man-made factors don't play a role in these blooms.

Pollution does play a part when it comes to blue-green algae blooms. Nutrient pollution from decaying organic material, fertilizers, manure and other sources runs off from the land into the water with heavy rain. In turn, the nitrogen and phosphorus from those pollutants encourage cyanobacteria growth. Just like with red tide, treatment isn't easy.

WLRN-TV reports that the removing phosphorus from water is the way to cut down on the blooms, but it's a timely process and requires 60,000 acres of shallow reservoirs just to treat a small portion of  the water that flows out of Lake Okeechobee. The Everglades Foundation in South Florida has developed a contest called the The George Barley Water prize in hopes of finding a treatment method that is affordable and effective on a large scale. The entity that develops that solution will win a $10 million prize.