The Villages Honor Flight returns from trip to Washington

Volusia law enforcement gear up for Trucktoberfest this weekend

Is it really Halloween if you don’t have this cute 4-foot inflatable witch pumpkin sitting on your porch?

Stay safe this Halloween with these festive kids face masks

SpaceX plans to construct launch mount, landing pad for Starship at 39A

CAPE CANAVERAL, Fla. – An environmental report from SpaceX for NASA details what interplanetary launches could look like from NASA's Kennedy Space Center including where Elon Musk’s company plans to land Starship and its mega rocket booster Super Heavy.

SpaceX produced a draft report for NASA to provide a possible action plan to avoid environmental impacts that Starship and Super Heavy booster launches and landings could have on the Space Center, Merritt Island National Wildlife Refuge, Canaveral National Seashore and the greater Space Coast.

Starship is SpaceX’s fully reusable spacecraft designed for human and spacecraft launches to the moon and Mars. The 180-foot-tall, 30-foot-wide Starship will launch on a reusable booster called the Super Heavy which is powered by 31 Raptor engines.

For those launches, SpaceX plans build an additional launch mount for Starship/Super Heavy within the Launch Complex 39A at KSC, according to the 250-page action plan. The company currently launches its Falcon 9 and Falcon Heavy rockets from the historic KSC launch site where Saturn V launched Apollo 11 to the moon 50 years ago.

The document also shows SpaceX plans to construct a new landing pad at 39A to support Starship landings. Before a new pad is complete, Starship will land at Landing Zone-1 at Cape Canaveral Air Force Station where SpaceX currently lands its Falcon boosters.

The new landing pad at 39A would be approximately 85 meters in diameter and look similar to the existing landing pads SpaceX uses at Cape Canaveral.

However, land landings of Starship at 39A will require "additional analysis to fully assess the potential impacts to NASA programs, facilities, personnel and operations," according to the report.

The company considered utilizing Cape Canaveral Air Force Station Space Launch Complex 40 for Starship launches and landings but the infrastructure and size of the facility wouldn’t support the operation, according to the report.

SpaceX plans to eventually launch the spaceship about 24 times a year with the first test flight happening no earlier than next year.

The company also has its first paying customer for Starship, Japanese billionaire Yusaku Maezawa will invite eight artists to fly around the moon with him.

Musk said last year the paid moon flight could happen as soon as 2023, after several test flights without crew. However, the SpaceX founder also said he was "pretty not sure" about that timeline, because "things do not go right in reality." 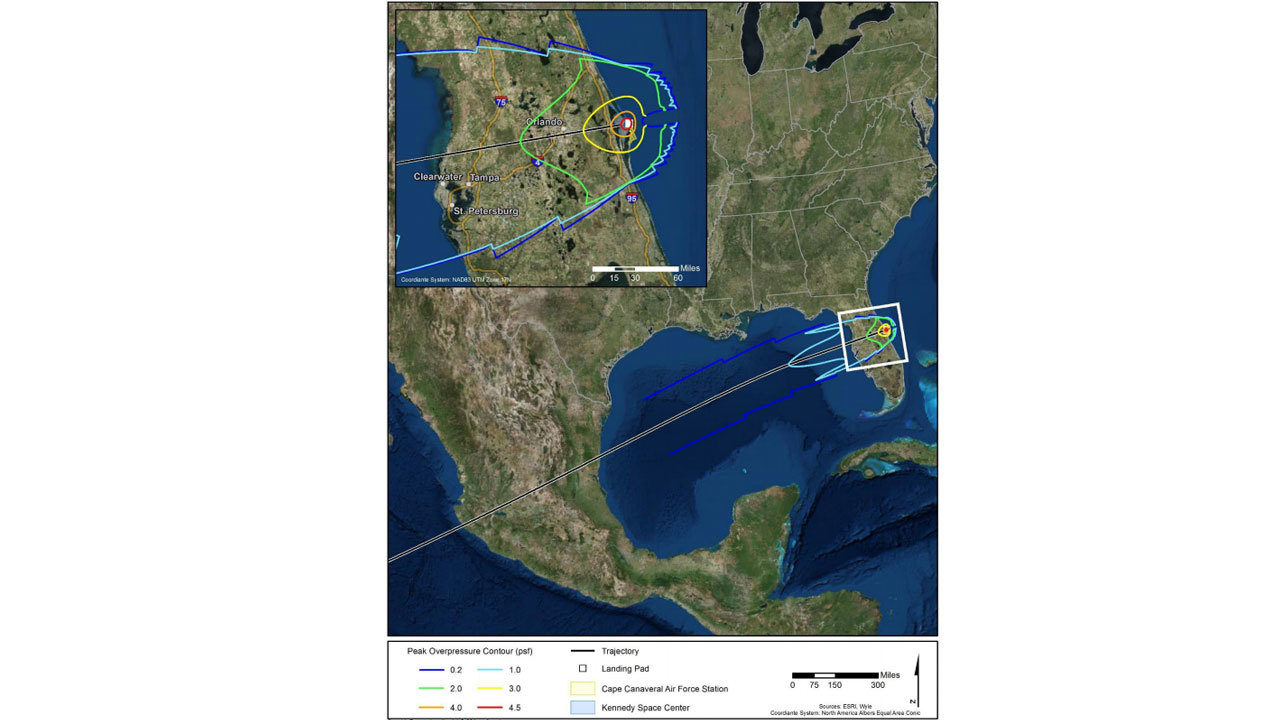 At liftoff, Super Heavy will produce 13.9 million pounds of thrust. Approximately 43 miles above the launch site, Super Heavy’s 31 engines would cut off and Starship would separate from the booster.

The Super Heavy booster would come back to land downrange no closer than 20 miles away on a droneship in the Atlantic Ocean. If SpaceX is able to land the booster back on land like it does with Falcon booster currently, then another environmental assessment would need to be developed.

It’s unlikely, people on land will hear sonic booms associated with the ocean landings 20 miles out, according to the report.

However, when Starship returns from its mission SpaceX plans to land it Cape Canaveral Air Force Station at landing Zone 1, where SpaceX currently lands its Falcon boosters.

A graphic (featured below) in the report shows what a Starship re-entry and landing would look like.

A sonic boom foot print for a Starship landing at LZ-1 shows that residents in the surrounding areas of the landing pad to Florida’s West Coast could hear the multiple booms when Starship comes in for landing.

Weather conditions also have an affect on how intense a sonic boom is and how far the sound travels.

The spaceship would also have the option to land on an ocean drone ship no closer than five nautical miles off the Space Coast.

SpaceX said it plans to notify the public through news media and law enforcement prior to a landing that would produce a sonic boom.

Currently, Starship prototypes are under construction and being tested at sites in Boca Chica, Texas and in Cocoa. According to the action plan, SpaceX plans to continue to use the sites to manufacture Starship.

Together, the spaceship and booster will stand 400 feet tall.

SpaceX will utilize the same area of the Turn Basin NASA used during the Space Shuttle Program to offload hardware just southeast of the Vehicle Assembly Building.